Conquering the ‘Mother of All Relay Races’ – Blind 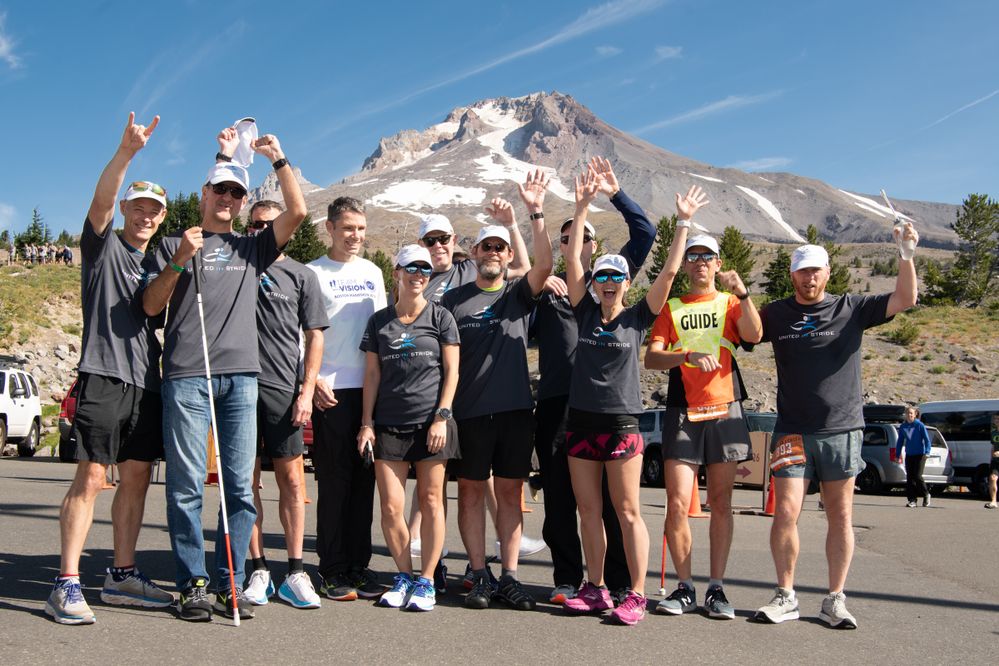 Darryl Adams was a key member of a team that spent last weekend running 200 miles along the mountainous path from Mt. Hood to the Oregon Coast. This team of runners had two things in common: they all love to run, and they are all blind or visually impaired.

Conceived by Richard Hunter and managed by the Massachusetts Association for the Blind and Visually Impaired, United in Stride is a program that pairs blind and visually impaired runners with sighted guides across North America. It’s also the name of the first-ever team of blind and visually impaired runners to run Hood to Coast, the longest running and walking relay in the world. The annual race attracts over 1,000 teams typically consisting of 12 runners each. Each team splits between two vans, and runners trade off legs throughout the roughly 24-hour race period.

The United in Stride team was comprised of 10 runners and 10 guides. Darryl Adams, a team member and an assistive technology program manager at Intel, says: “Richard is the driving force behind the whole thing.” He recruited their team of extraordinary athletes from across the U.S. and Canada.

“I am inspired by those people. I read through their bios and thought, man, I should probably start running,” jokes Darryl. He, like his teammates, is visually impaired, having been diagnosed with Retinitis Pigmentosa at age 14. Unlike his teammates, he and his guide both prepared to run the race injured.

“Unfortunately, I ended up with a tear in my tendon while preparing for my first leg…so I did not run. I stayed with the team throughout and had an incredible experience. The team stepped up immediately, reassigning my legs so all runners ran four legs. It was so inspiring witnessing these athletes do their thing.”

Despite everything, the cause was worth it. “I needed to do this to drive awareness of blind runners and the need for more sighted guides. There’s really nothing to it—if you can run, like to run, and can see, you can guide. And it makes a world of difference to the people who need it.”

Darryl is legally blind but relies on central vision to do things in the daytime. During nighttime, it’s a different matter. “It’s like my eyes are completely closed.” Since part of the relay was raced at night, having a good runner/guide relationship was essential. “Trust is central to what it means to be experiencing low vision,” says Darryl. “When people have mutual trust, they can rely on each other.”

Craig Chapman, a technical engineer in Intel’s Data Center Group, served as a guide for the race. He’d never heard of United in Stride before but jumped at the chance to participate. “The opportunity to guide someone sounded like an excellent challenge and an interesting way to become involved with Hood to Coast. It’s one thing to run a race running just for yourself, it’s another thing to be running and enabling someone else to run.”

Forging ahead with purpose

When Darryl joined Intel in 1996, his condition didn’t yet impact daily life. However, as his eyesight worsened over the years, he came to a crossroads. As his job became affected, he remembers thinking “What am I going to do?” He found a new purpose working on technologies that help level the playing field for people with disabilities.

Now an assistive technology and accessibility program manager, he says: “Intel is a great place for me to not just be employed, but to help others through technology. It’s about me being able to take my unique perspective—and represent people with disabilities in general—and look at how the technologies we build can benefit society and people of all abilities.”

Beyond the finish line

Exhausted, exhilarated runners in bright, eye-catching vests reading “Blind” or “Guide” gathered at the beach entrance that would take them to the finish line. The United in Stride team crossed it together. Out of 1,200 teams, they came in 186th place.

What they accomplished is incredible. The purpose of the program is even more so. United in Stride is simpler, bigger, and more profound than races and making history. It’s the chance to make a difference in a person’s life.

Find out more about becoming a sighted guide at http://www.unitedinstride.com/