Having Hope: How One Black Leader Grew His Career at Intel 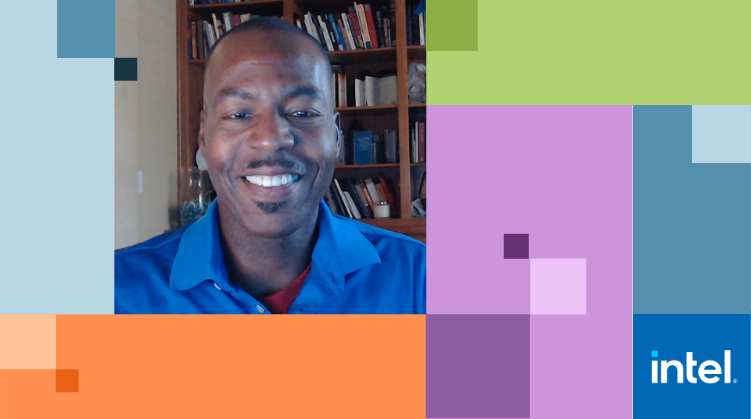 “I decided if I were to die tomorrow, I want to be happy with where I spent my time.” This was the promise Hope Merritt made to his 22-year-old self when he came down with a severe cold that knocked him out for a few weeks.

Years later, he hasn’t broken his promise. Now Vice President and General Manager of Data Center Platform Application Engineering, Hope started at Intel straight out of college. It might be hard to imagine a college graduate willingly staying with one organization for over two decades, but for Hope, working his way up at Intel felt like working at seven different companies.

Saying yes to every challenge
Hope maintains his passion for his work by continuing to sign up for projects that challenge him. This strategy has helped him get promoted several times over the years, ultimately landing him a leadership position.

“I raised my hand for so many things I had no idea how to do, and then I figured it out,” Hope said. “There are a lot of people who can follow instructions, but if you want to be a leader here, you’ve got to say, ‘I will take that on, and I’m not 100% sure how to get there, but I’m confident I will figure it out.’”

Hope’s drive and willingness to learn subjects he wasn’t an expert in allowed him to gain a holistic view of how Intel operates. He started working on computer chipsets and then moved to the software side.

“I was really interested in software, so I studied it even when it wasn’t a focus of my role. It paid off because as software became important at the company, I was one of the leaders in that area,” Hope said.

After familiarizing himself with how software worked, Hope went on to graphics, where he also excelled. Thanks to his reputation as someone who enjoyed challenges, he was brought in to work on 3D cameras and speech recognition at a time when the team leading those efforts were facing some big obstacles. Hope’s previous experience proved extremely valuable in helping his new team find solutions and exceed their goals.

The council helps Black leaders at Intel get to know each other. It also brings a more diverse perspective to the company and gives this group of directors, vice presidents, and principal engineers a voice in the future of the organization. For the last four years, Hope has spearheaded an annual giving campaign for the council, and he is proud of the impact Black leaders are making at the company and in the community.

Continuing to grow
Hope continues to make an impact at Intel through his work and his leadership. “I want to show up and have fun every day,” shared Hope. “I want to enjoy my current job and get offered the next one.”

Are you looking for a place to grow your own career? Find your next opportunity with Intel at jobs.intel.com.