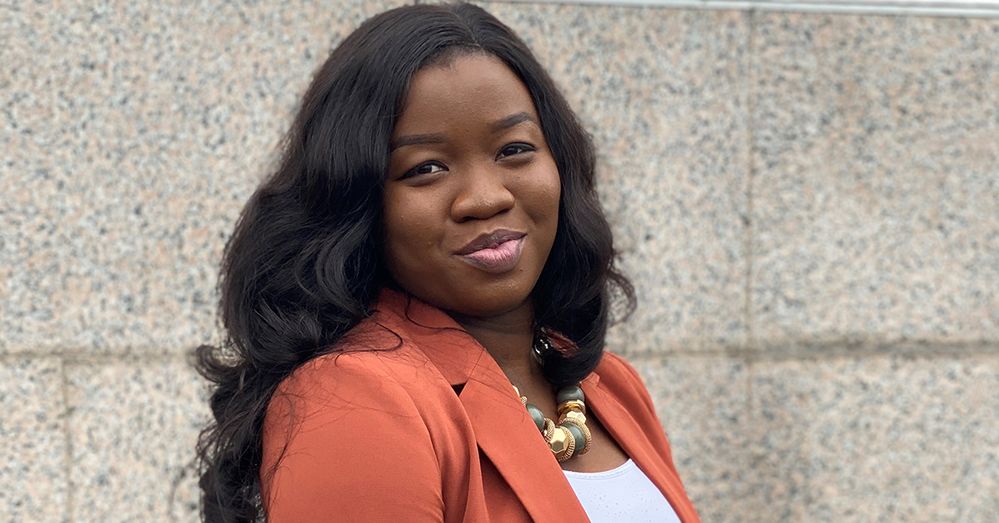 “The sky isn't the limit, it’s your starting point.”

Her friends call her the bargain finder. But Oluwakemi “Kemi” Akande can't help it. In and out of the office, she’s always on the lookout for the best price when it comes to the highest quality product. It’s a mentality she brings with her to work.

Kemi is an LTD industrial engineer at Intel, part of the Model of Record team that works across all groups to optimize everything from process to equipment to time expenditures, all while looking for ways to lower costs without impacting product quality.

“It's not just about my career, it's really the entirety of who I am,” says Kemi. “Industrial engineering is like a culture, really. It just gets so intertwined, and it shows up in every aspect of your life.”

The second of five kids in her family, Kemi spent most of her life in Nigeria. Her father, too, was an industrial engineer, too—and while her upbringing was focused on cost and quality, she did not grow up believing industrial engineering was for her.

First introduced to STEM in high school, Kemi thought she would study to become a doctor. But she quickly found out she had an aversion to blood—and didn’t really enjoy biology—so she pivoted to chemical engineering. Upon graduating, she worked in that field for a spell before feeling a gentle tug toward her father’s profession.

Feeling uncertain about her next steps, Kemi visited her uncle in the United States. He worked in tech and had long been a source of inspiration for her, sharing advice that had fueled her journey in STEM. She discussed her intention to attend grad school, which meant she’d have to leave her life in Nigeria behind. As hard as that would be, she believed it was something she had to do in the name of greater opportunities. Her uncle agreed and encouraged her to follow her heart.

“We started to talk about my goals,” says Kemi, “and he said ‘I know a couple of good schools. I'll take you there so you can apply.’ And then he took the next day off of work, and we drove down to Southern Illinois University-Edwardsville and filled out my application.”

She was accepted into the graduate program there, and after earning her master’s in industrial engineering, Kemi once again returned to her uncle for advice on where to look for a job. Until then, she’d mostly been applying at smaller companies because she didn't believe she had what it would take to thrive at a larger company. (Spoiler alert: She was wrong.)

“My uncle sat me down,” says Kemi, “and he said, ‘Get that thought out of your head! You are a big shot and should be able to play in the big leagues! The sky’s your starting point,’ he told me. ‘Not your limit!’”

That’s when he suggested Intel. So, inspired by her uncle’s encouraging advice and with nothing to lose, Kemi took a chance and applied. Next thing she knew, she was walking through the doors at Intel to begin her first day as an industrial engineer.

It didn’t take her long to realize it was a great fit. “Intel is not a place where you keep doing the same thing over and over again,” says Kemi. “You’re constantly given opportunities to engage your creative mind and come up with new ideas that are never shoved aside.”

Besides a hub of innovation, Kemi has found a place at Intel where differences are celebrated.

“The fact that I’m exposed to people from different parts of the world opens me up to how other people think,” says Kemi. “It helps me see things from a new perspective. It makes me feel like I belong here. It’s a company that really cares about me.”

Through employee resource groups—particularly the Women at Intel and the Network of African American Ancestry—Kemi has had the opportunity to form community and broaden her perspectives.

“Being in an ERG has really helped me to network outside my group,” Kemi says, “And with that, there are a lot of opportunities to hone my skills and practice public speaking. I even joined an ERG to learn more about the stock market and investment.”

When she isn’t developing her own professional skills, she loves to sing and advise her younger brother in the same way her uncle advised her. He’s currently studying computer science and hopes to one day work at Intel too.

“In everything I do, I want to be communicating excellence to him,” says Kemi. “I tell him that if you can be dedicated, and laser-focused on your studies, your opportunities will be endless.” And it’s good advice for anyone looking to grow a rewarding career in STEM.

Learn about how you too can have a meaningful and impactful at Intel.
0 Kudos
Share