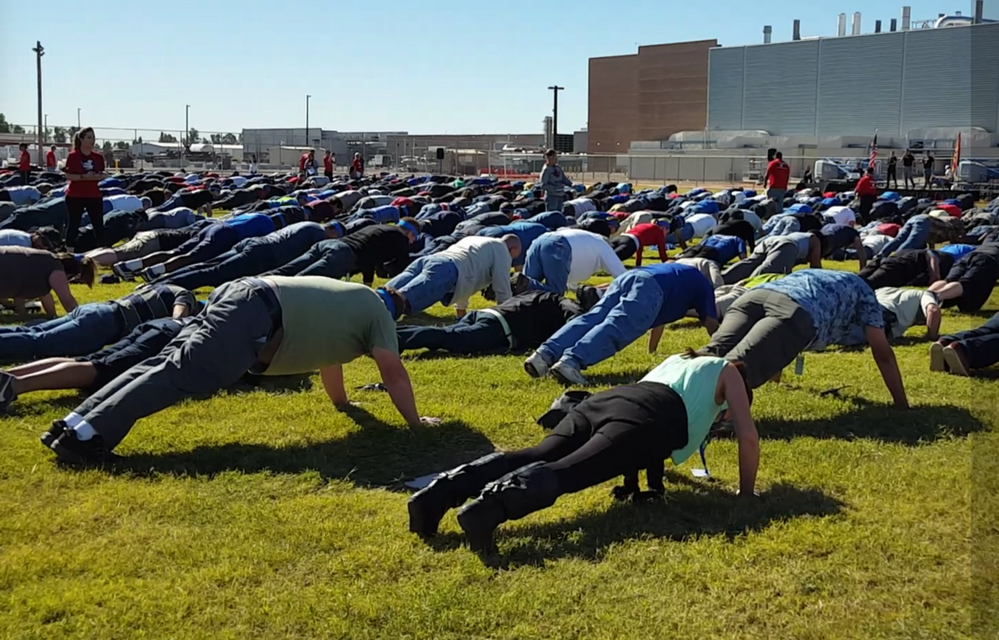 We_Are_Intel1
Employee
0 0 605
It's been quite a week for Intel's efforts to honor U.S. veterans. Not only was the company named a Top 100 Military Friendly Employer, but Intel employees also succeeded in achieving an extraordinary goal—a novel way to commend the men and women who have served the U.S. in uniform.

Never before has there been an Intel event quite like this one—hundreds and hundreds of employees at major U.S. sites suddenly dropping to their hands en-masse, to do pushups. The goal? To break the existing Guinness World Records mark of 734 people grunting and sweating out pushups all at one time, all in one place.

Record or not, Intel pledged to donate $100,000 to a pair of veterans non-profit groups. (The Intel effort was aligned with the national #GiveThem20 program to salute and support vets.)

So did Intel employees set a new pushup pinnacle? Oh yes, they did—with a grand total of 1286 people doing simultaneous pushups at our site in Hillsboro, Oregon. A new (and official) Guinness World Record.

Intel was named one of 2016's Top 100 Military Friendly Employers.

Intel was also recognized for doing more than pushups for veterans. In compiling its annual list, Victory Media evaluated companies on programs and policies for the military community, including the strength of company military recruiting efforts, percentage of new hires with prior military service, retention programs for veterans, and company policies on National Guard and Reserve service.

Veterans of the U.S. armed forces at Intel not only number more than 4,000—they are a diverse group of employees whose real-world experiences and skills make them an ideal fit for Intel's culture of discipline, results orientation, and pride in their work. Intel’s Veterans Initiative aims to increase veteran representation, as part of the company's Diversity and Inclusion program.