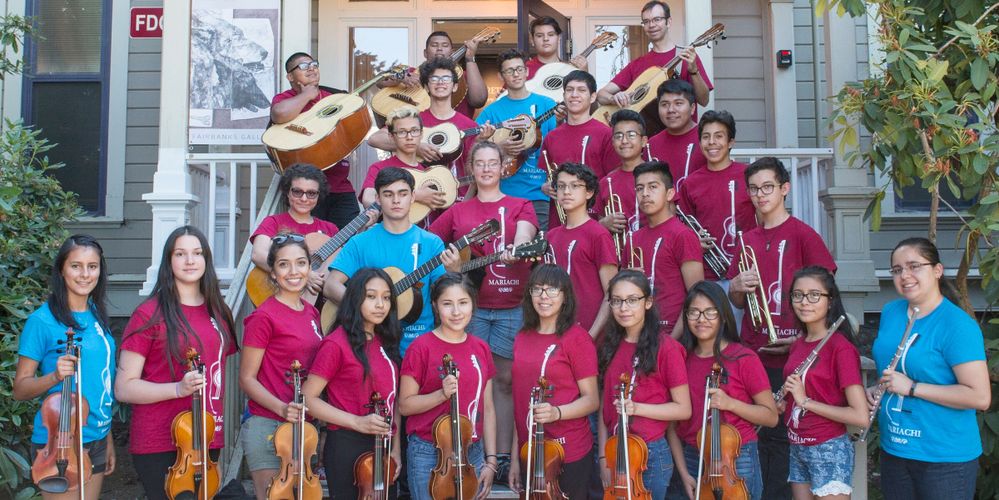 A Mariachi STEAM summer camp provides underserved youth an opportunity to explore the magical connections between music and STEM.

It’s amazing how many great ideas stem from just a single cup of coffee and a meaningful conversation. For Romanna Flores and Richard Flores (same last name, no relation), coffee wasn’t the only thing that brought them together, back in 2016, when they met at a cafeteria on Intel’s Hillsboro campus—it was a shared desire to do something more for their community.

“We were talking about how we both come from creative backgrounds,” says Romanna of that initial conversation, “and how our passion for creativity has evolved, and how it contributes to the work we’re doing now.”

That day, Richard told Romanna about the challenges he was facing trying to recruit students for a STEM-based program he was involved in. And in turn, Romanna told Richard about a group of students she knew about, deeply immersed in Mariachi music, the quintessential musical ensemble that has grown to typify Mexican music and culture. And that’s when it dawned on her.

“I basically said to Richard, Wouldn’t it be cool if we could do something that appealed to their passion for music and honored their traditions, all while showing them the math, science, and engineering behind the music they love?”

And just like that, the concept for Mariachi STEAM Camp was born.

Mariachi STEAM is a summer camp that provides underserved Hispanic youth from Oregon—primarily the Hillsboro area, a community that is 23% Latinx—an opportunity to explore the magical connections between music and STEM. By examining the music they love through the lens of science, technology, engineering, and math, not only are the students able to improve their Mariachi performance skills, they learn (in the words of Richard Flores) that “science isn’t so scary after all!”

“We take these students who are very passionate about music,” says Richard, “and we expose them to technology. For example, we talk about sound and we talk about music in a way that’s more relatable to them than if we just tried to talk about wave propagation in some abstract way.”

Students learn about music theory, audio processing, and other STEM concepts by participating in hands-on activities that are both fun and educational—like constructing electronic greeting cards that play Mariachi music when opened. And even though this year’s version was entirely virtual, students still had an enjoyable time playing music and learning a lot from the safety of their own homes.

“When we talk about doing outreach,” says Romanna, “I think we have to ask ourselves, have we done everything we can to really help a person explore the possibilities? And with youth, I think that’s the one thing we have to constantly work on. We need to figure out ways to keep their interest, keep them engaged. Being able to meet new kids through Mariachi STEAM and seeing what their interests are, that’s what keeps me coming back, and keeps the staff coming back to volunteer.

“They’re amazing kids,” she continues. “They just always want to know more. And if you give them the opportunity to ask those questions, you’ll be amazed at what they ask and what they want to know. It’s not what we teach at Mariachi STEAM, it’s what the kids experience. That’s what’s gonna change lives.”

It’s certainly impacted the life of 21-year-old Marianna, a senior at Pacific University who’s attended the camp four times and is now majoring in biology.

“The most important thing Mariachi STEAM has taught me,” says Marianna, “is that you can go wherever your brain takes you. To take this opportunity and go be creative, go explore music further. You can take whatever path you want for your future.”

While Mariachi STEAM does an extraordinary job of imparting the relationship between music and technology, making kids eager for a potential future in STEM, its resonance rings much larger than that.

“Mariachi music is just something we grow up listening to,” says Romanna. “It’s a part of who we are. So it’s amazing that these songs I grew up with—songs that are 70 years old!—the students at camp, they’re still singing them!”

Richard agrees. “Mariachi music, and music in general, is very important in the Latinx community,” he says. “It’s basically the DNA of our culture. So to see just how much passion these kids have for Mariachi music gives me energy. It gives me hope.”

But when it comes to Mariachi STEAM Camp, hope is reciprocal.

See how other Intel employees are changing their communities—and the world—by checking out their stories at Intel Involved.
0 Kudos
Share