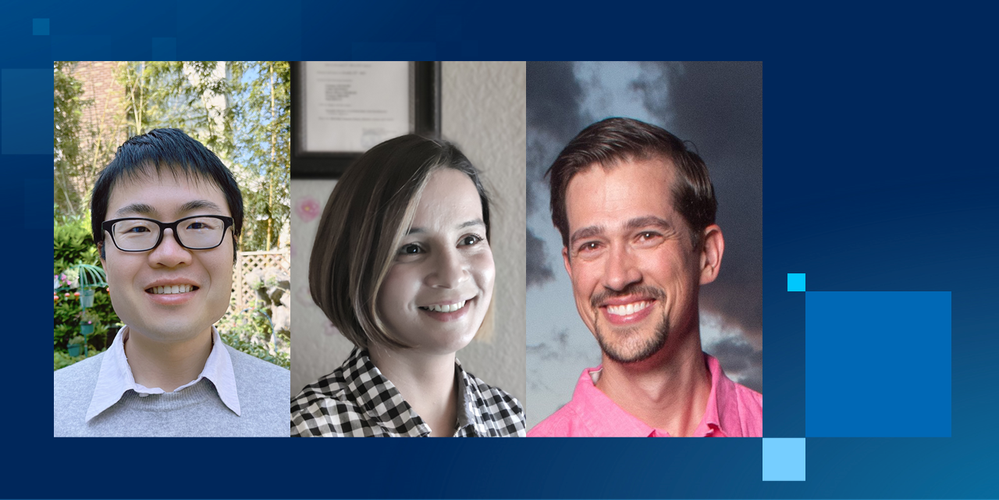 While much of the world thinks of Intel as a hardware company, we've also provided career opportunities at every layer of the software stack for decades. Intel now employs roughly 20,000 software professionals, making us one of the largest software companies in the world. Recently, we met up with three software engineers to talk about how their work brings Intel hardware to life.

Finding meaning in valuable work
When he landed at Intel over a decade ago, software engineer Benjamin Walker had just recently begun his software journey. "I did not study computer science in school," says Walker. "Instead, I studied physics. I knew some level of programming when I started at Intel but did not know any of the languages I work in today. I learned those all on the job."

Today, most of Ben's work lies at the core of computing. "I'm defining the interactions between software and hardware in terms of specifications like NVM Express," he explains. "Designing the software libraries that go on top of those interfaces so that other programmers higher up in the ecosystem, who are designing the applications that people might interact with on their phones or a computer, can use to access all of these latest hardware innovations."

After completing her Ph.D. in the domain of compilers for high-performance computing and spending three years as a postdoc and research associate professor, Senior HPC/DL Compiler Developer Dounia Khaldi decided it was time to make the move to industry and joined Intel in 2017.

"My first choice was Intel," Khaldi says. "I am passionate about compilers and came to Intel to be closer to the hardware. I really get excited about working on new technologies."

Currently, Khaldi is working on a new matrix extension that will be added to programming languages like C++ and DPC++. Her work addresses the problem of how to expose Tensor hardware for Intel CPUs and GPUs to tool developers and users in general. "Matrix operations run in the background of many aspects of people's lives. You name it: things like weather prediction, agriculture, image reconstruction in medical applications, even the car you are driving. Matrix multiply is part of aerodynamics applications that play a key role in building fast and energy-efficient cars or smooth-riding airplanes, so optimizing matrix multiply helps advance the science in different domains. It really touches people's lives everywhere."

With Intel Neural Compressor delivering high-performance AI inference in real-life applications, Shen is more than a little satisfied with his team's accomplishments. "I'm very proud to tell [people] that our technology is changing the world and bringing AI everywhere," he says. "[It] helps every human being on the earth."

Addressing customer needs and making a real-world impact
"I really get excited about new technologies like the one I'm working on," says Khaldi. "Right now, for validation, I'm using pre-production hardware. I am among the first people in the world to use this new cutting-edge hardware, plus my work will be part of the software on Aurora, an Exascale supercomputer that will enable breakthrough science."

Walker is enthusiastic about how so many of the technologies he's helping enable go on to become household names, even to people not in technology. "The impact that I can have here—on computing and generally—by defining the right software models [and] the choices we make in how we expose hardware features to the operating system and applications," he says, "has a major impact on the industry that I don't think I could really have anywhere else."

Creating that kind of industry impact starts with building solutions that address customers' needs—whether stated or not.

"When you want to create a new product, you always need to consider what the benefit is for Intel and how Intel customers will benefit from this technology," says Shen. "To make a product successful, what are the key indicators we need to create and execute towards the goal? We need to listen to customers, translate their needs into features and products, and [then] provide solutions that can quickly meet customer requirements."

Beyond the need for customer focus and obsession, the ideas in Pat Gelsinger's October 2021 Open Letter to an Open Ecosystem, where he described the value of an open ecosystem, also resonated with the people we spoke to. "Today," Walker says, "the work we do is mostly open-source; it's mostly collaborative across other companies."

Talking about her current work developing a new matrix extension to transparently use Tensor hardware, Khaldi explained that it is part of the Intel oneAPI initiative. "It is all open-source—at least most of the software is," says Khaldi. "I was able to publish a paper and talk about it in some venues."

Appreciating their unique opportunities
Shen has accessed a variety of opportunities at Intel—all while remaining on the same team over the years. "I started my career at Intel as a software validation engineer, and luckily, I had the chance to work in multiple roles starting [with] tool development, [then] AI framework development and software architect, and now engineering manager."

Khaldi believes in the importance of mentorship at Intel. "Besides the technical leadership, you have to work on being a mentor, not just having mentors," she says. "I like doing that; being a mentor to junior persons who join fresh from universities—teaching or showing them how to speak up and talk more about the value of their work."

Khaldi sometimes takes her mentoring skills on the road, sharing her enthusiasm for tech with young women she meets. "Whether I'm talking to my nieces or [to other young women], or to someone who has girls, I encourage them to [explore] a career in computer science, and I talk about how Intel is a very good place to work because there is this respect."

Perhaps Benjamin Walker summed up the value of the Intel experience best when he said, "Intel is a place where you get to work on what likely will become the future of computing, and the decisions you make will matter in the long run. If you want to have an impact on the world—a broad impact—then you need to work at a place that is not just building a single product or two but is instead enabling computing more broadly," he continued. "That really [happens] at just a couple of places, and Intel is certainly one of those."