Using Interpersonal Intelligence to Build a Career in AI 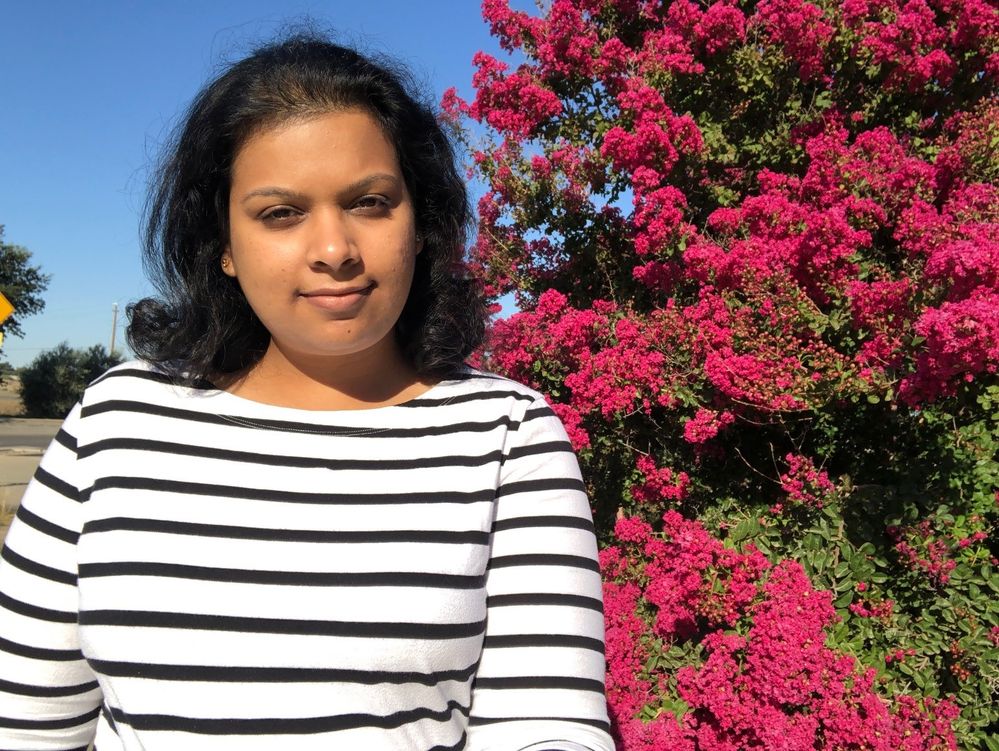 After nearly five years at Intel, Anisha Gartia is still excited about how her role draws on and develops so many of her talents and interests. Based in Santa Clara, she's building a career at the point where hardware, software, and customers converge. We sat down with her to talk about how it all came together.

As an AI Technical Solution Specialist, she helps optimize Intel processors for peak performance as they run speech, text, recommendation, and a variety of other AI-related applications in customer data centers.

"Take a processor with 128 physical cores," explained Gartia. "Sometimes you'll have an application which is using only 30 cores, and the other cores are just sitting idle and not really doing anything—just using electricity."

"An application has to be well-programmed so that it can run efficiently and use all 128 physical cores," Gartia said. "It's usually very small software tweaks—sometimes just flags or variables that you have to set ahead of time."

But the solution isn't always obvious. "Sometimes it's trial and error to get the best number," she added, "but there are also hyperparameter tuning tools like SigOpt, which can handle a good deal of the work as we guide customers on how to set the right number. "

Customer-centric and software focused
Customer interactions are among the most satisfying—and surprising—aspects of her role. "When I moved to Intel, I got an opportunity to work with customers, which is, I think, the best part of my role—in addition to the great people here and the wide array of applications I work with, " Gartia said.

"There are customers who see Intel as a hardware partner only. I love to be able to change that perception and show them that we can do a lot more on the software side as well, " she shared. "Software is critical to ensuring that the hardware is fully utilized, and the fact that it's pretty much my everyday work really makes me proud to have a CEO who recognizes that, " she said. "[He agrees that] software is a powerful and competitive differentiator for processors. "

"I also love introducing customers to the various programs we have in Intel, " she continued. "We have programs for independent software vendors or anyone seeking the attention of [our investment division] Intel Capital or an OEM who wants to partner with Intel in a different form. Anyone who wants to engage with Intel has a place to engage. "

A welcoming culture
It's more than a great role and work environment that keeps Gartia happy at Intel. She's also genuinely taken with Intel's culture, values, and inclusion.

"The culture is amazing, " she said. "We have our pillars of culture, and my personal favorite is One Intel. " One Intel teaches that by recognizing, respecting, and building trust with each other, we can build passionate, empowered, and successful teams committed to doing what's best for the company.

"You know, there's always healthy competition, " Gartia said, "but we make sure that we're all on the same side. And people are not afraid to use that in email, saying ''hey, #oneintel, let's do this.''"

The idea that values are important—and genuinely lived—hit home right away.

"My first year at Intel was really welcoming. I joined an employee group called NextGen Professionals Network. NextGen is open to anyone at Intel for zero to 10 years and really helps with the transition, she explained. "We get a buddy who helps show us how to get the best out of our experience at Intel—and what all the acronyms mean."

Over the years, she's also participated in recreational groups and activities, including a hiking group, board game evenings, and, most recently, a Hawaiian cooking class.

"It's easy to assume that Intel is full of highly experienced people," Gartia said, "but these employee groups show you that it's also a really young company. They help people who are newer join in and connect with each other."

A supportive environment
An important part of succeeding in any job is having access to great mentors and managers, and Gartia has had her share of them along the way.

Some of the mentoring relationships she's had have been more structured, and others were built around 30-minute meetings as needed. "I've had multiple mentors who I connected with through conversations as a part of my job or at networking events, Gartia said. "I also call my manager my mentor. She's a great person, a great manager, and a great mentor to work with."

She's proud to see so many women in her organization too. "There was a time when I had three levels of women in my hierarchy," she said. "I actually saved a screenshot of one of our team calls from back then. I love the fact that we have so many women leaders in tech and AI."

Beyond mentoring, Gartia sees a lot of value in the less formal "buddy" program mentioned above. Being paired with someone, she could talk with about navigating through the company day to day smoothed the way into her new role at Intel. Today she's returning the favor, having signed up to be a buddy to the next generation.

Gartia also helps connect people with roles that they're interested in pursuing. "If someone is interested in a specific role and I know another person who's currently in [a similar] role, I often introduce them so they can seek mentorship from that person," she said.