we have an custom cyclone v board and the micrel KSZ9031RNX phy. we use an debian system with kernel version 4.15 (i try different versions). if we transfer data with scp it result in the same tcp retransmission errors.  i change the rgmii skew timings, but no setting is without retransmissions.

i ve attached an wireshark screenshoot. 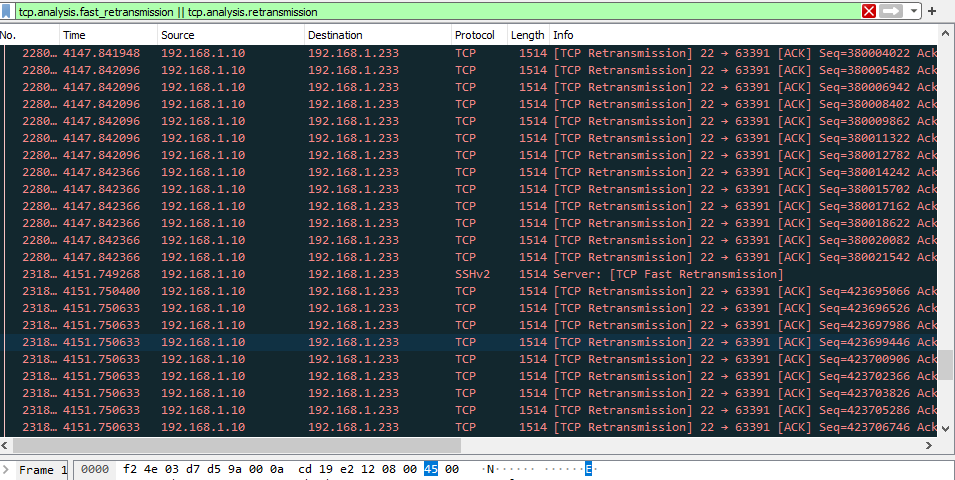 can someone check if they have the same issues with the cyclone v, or with the terasic board?

i can upload an wireshark capture, but it is round about 200MB.

After many tests and debugging I fond a solution which works for the moment. I never found the exact root cause of the issue, but it works with the following software releases:

Fact is, that in my case an update just of the Linux kernel was not enough! I really don't know the root cause, but it seams that this combination of u-boot and kernel works.

In a TCP/IP Client-Server Model arch, TCP retransmission errors can happen ONLY when the transmitting end does not receive TCP-ACK from the receiving end.

Few possibilities of NOT receiving TCP-ACK are:

it's normal to see TCP retransmission, but a high number can impact traffic flow.

Usually it's cabling that it's not so good, and causes packet drops.

Check for errors along the traffic path.

Also, you could issue an extended ping see if packets are lost... also do a traceroute and see if there is unusually large delay at a particular hop.

If packets are lost on the ping on and off it could be a load balancing issue. If you know there is load balancing somewhere in your network, one path works and one path doesn't work causing some packets to be lost and some to not be lost.

Also, a lot of retransmissions could be the result of port buffer overflow, and either Tx or Rx or both are dropping packets.

Hope these inputs will resolve your issue.

thanks you a lot for the answer.

the board is direct connected at the computer, no switch etc, only a 3m cat6 cable.

but on both boards sometimes we get an retransmission error transfer an 1gb file, i think this is "usal".

but i am confused about the skew timing, i open an new thread about that issue.

As you have opened a new thread, I now transition this thread to community support. If you have a new question, Please login to ‘ https://supporttickets.intel.com’, view details of the desire request, and post a feed/response within the next 15 days to allow me to continue to support you. After 15 days, this thread will be transitioned to community support. The community users will be able to help you on your follow-up questions.