Recently,  our two servers which installed N3000-1 and N3000-2 respectively meet the same questions. And both of the servers had been work correctly with N3000 for several months. Here are the main phenomenons：

Actually，the two servers are used by different people and they do not use the other machine. The log shows that the occurrence of reboot dues to the release of  interrupt.

We tried to uninstall the opae packages， and the machine would not reboot now. However， it makes that the functions of opae are unavailable， which is not the best option.

Anyone knows why and any least expensive solutions ？ 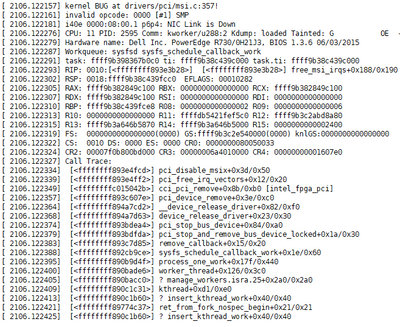 ==> This is expected. When you program the sof, you are actually reprogramming the FPGA directly (not the FPGA flash). Host will panic when it see Endpoint disappear (during the programming) from its pcie bus

==> What driver are you binding? I dont expect binding OPAE driver will cause any reboot.

==> rsu bmcimg will first mask the PCIe AER and then reprogram the FPGA from the flash. Server reboot is not expected. What bitstream are you using.

If you can provide more information such as rpm -qa | grep opae, fpgainfo fme, fpgainfo port, dmesg -T, lspci -vvv (before and after reboot). I can help to take further look into it.

There is no reply from you.
I am setting this case to closed-pending,
This loop will be close after 7 days if still no reply

Hoping to hear back from you.

We do not receive any response from you to the previous answer that I have provided. This thread will be transitioned to community support. If you have a new question, feel free to open a new thread to get support from Intel experts. Otherwise, the community users will continue to help you on this thread. Thank you