I need to use the 10/100/1000 Ethernet interface from Stratix V for a project. So far, I have successfully tested this interface in two cases:

However, I still need a license for using the TSE only with 1000BASE-X/SGMII PCS. Is there any other alternative to interface with the 88E1111 PHY without using the TSE IP?

May I know are you trying to look for free IP since you brought up IP suite license concern ?

Thank you for the fast response.

Yes, I am looking for a way to use the Ethernet interface without requiring an additional license. I thought that the license for the TSE IP was due to the MAC (which is soft-logic) and not due to the PCS/PMA (which is hard-logic) as shown below: 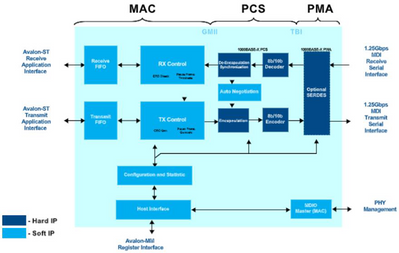 I have already tried to use the Transceiver Native PHY Intel Stratix V FPGA IP. In your design store, there is this great example for Arria 10, however, as far as I understood, it seems that the serial connection only supports high-speed ethernet using SFP+ ports instead of RJ45. I need to use the RJ45 interface from the Stratix V (which is the one connected to the 88E1111 chip).

What I need to understand is how to use the hard IPs that TSE uses for PCS/PMA as I already have a MAC IP. For instance, for the 10Gb connection, we can use the 10GBASE-R PHY IP for free and then develop our own MAC IP using XGMII interface. For 100M/1G,  we developed the MAC IP using GMII interface and we need the PHY IP for interfacing the 88E1111 via SGMII.

Am I missing something?

Unfortunately TSE IP is not free and we don't have other similar function IP for you.

Thank you for the clarifications, I only have one doubt left, if I may.

I am sorry if I still confused you but NativePHY IP with high speed serdes won't be able to connect to RJ45 connector.

I am not sure if there is external PHY chip available in market that can perform the conversion from high speed signal to RJ45 connection. If yes, then this is the only way.

Alright, I am now setting this case to closure.