Annoying fan speeds ramping up and down

In an attempt to stop the extremely annoying fluctuating fan speeds (seemingly far too sensitive to small and unnoticeable changes in cpu temperature), the only option I have found to work (apart from "Fixed") is a custom setting as shown in the attached image.

Surely below 55 degrees with these settings the system fan should be off, but it is not. It seems to come on at about 50 degrees regardless. Is this a bug?

Also, why are there no settings for the CPU fan?

Decca, Thank you for posting in the Intel® Communities Support.

In order for us to provide the most accurate assistance on this matter, we just wanted to confirm a few details about your system:

What is the model of the Intel® NUC?

Is this a new Intel® NUC?

Did you make any recent hardware/software changes?

Was it working fine before?

When did the issue start?

Which Windows* version are you using?

Which is the BIOS version currently installed on the Intel® NUC?

Decca
New Contributor I
2,073 Views
In response to Alberto_Sykes

The model is a brand new NUC 9 Extreme Kit - NUC9i9QNX.

Working fine - no changes. It is doing what it has always done since purchase.

Not a noise problem, just the fluctuating fan speeds, and the issue with the custom setting that I mentioned.

I am testing 2 equivalent systems and they both behave as you described but, to be honest, I can only perceive this fan fluctuation when there is absolutely no ambient/background noise. I was actually extremely surprised in a positive way by the quietness of the system.

Here are a couple of pictures of my BIOS Cooling report: 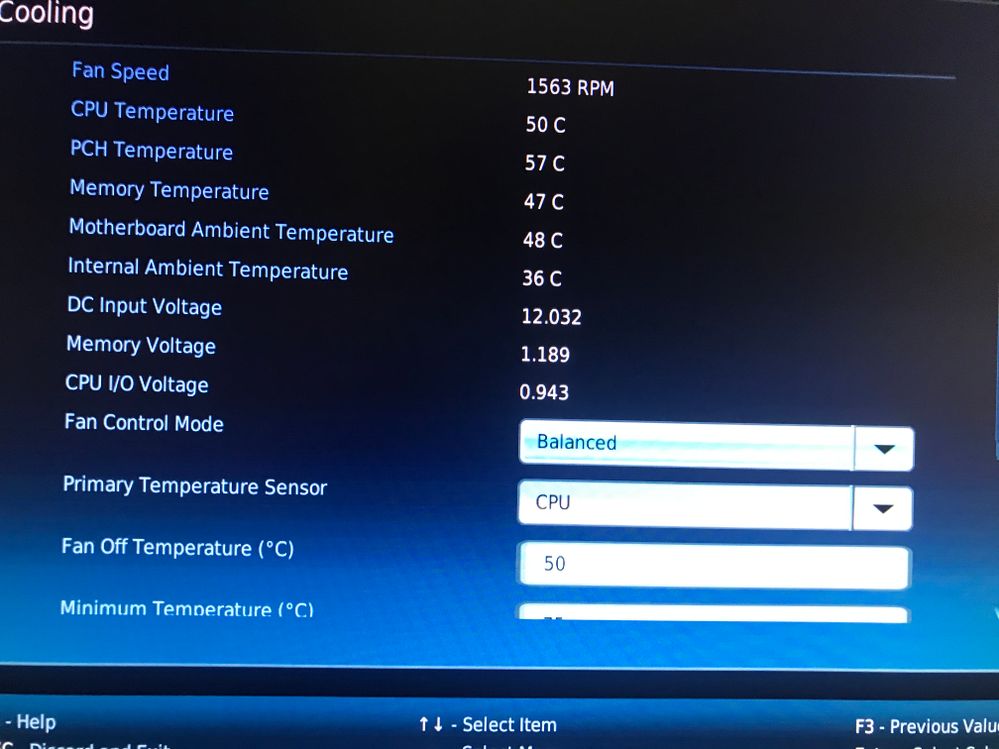 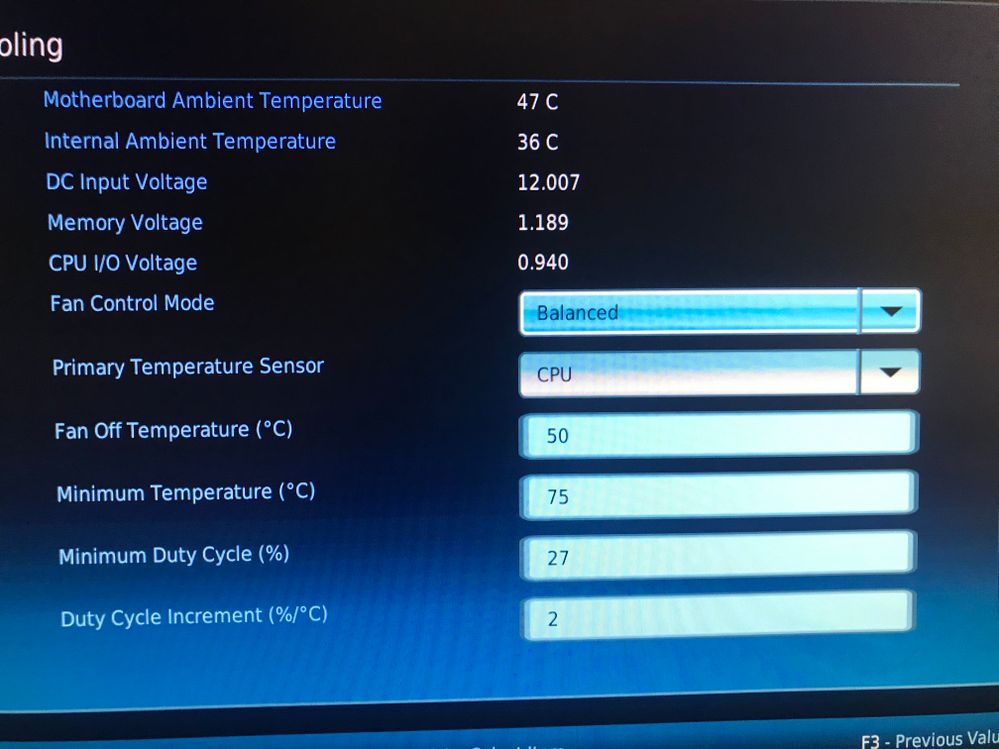 Please let us know if you are having any particular issue and we will be more than happy to help you out.

Decca
New Contributor I
2,033 Views
In response to Ronny_G_Intel

It's not massively loud, but I can hear it clearly.

It just seems to be extremely sensitive to a temperature fluctuation that is not visually evident in HWInfo. I would suggest that all it would need is for fan speed to be based on an "average" reading taken over the last few seconds.

Yes, I'm also hearing this "issue" with the NUC9i7QNB. (in the bios & windows, after a save and reboot)

On the existing profiles, the slight nudge over 50c (during minimum cpu use) causes the fan to frequently purr (as it's turned on and pushed through the noisier frequencies, and instantly turned off).

So far, 1. Turn off Turbo Boost to make this happen less. 2.  Or, risk thermal throttling with a fixed speed.

Question... wouldn't Minimum Duty Cycle % conflict with Fan Off Temp? Since the fan shouldn't go below that %? If that's not the case, why can't I set the Minimum Duty Cycle to something nice and inaudible like I can for the fixed setting (16%)?

There might actually be a bug in the bios Custom cooling settings? As both the Fan Off & Minimum Duty Cycle settings don't appear to be respected.

What I really want is for the fan to run at 16%, but to also ramp up as things get warm not too much to ask ¯\_(ツ)_/¯
(I currently have the NUC9i7QNB on the latest bios and in a Cooler Master case with no other Primary Temperature Censors but the CPU.)

I just purchased a NUC9i9QNX too. Exquisite engineering in a tiny chassis. Also have the Asus 3060ti in there.

Running into similar problems as you two (and probably many others who haven't found their way to these forums).

Very twitchy fan, if I'm being charitable 'curve'. Basically an on/off switch, not a gradual ramp.

What to do given:

OK, in lieu of cracking this puppy open and de-lidding with LM. Or returning it and getting an HP SFF/5750GE.

After some trial and error... Mostly error.

Here's what I did.

or was it the other way around?

Set that other setting to 170 (PC in other room, cant remember the bios settings name).

Basically I GIMPED it

So, I'm still getting turbo of 4.9ghz, and the total package wattage/tdp/choose your "heat/power" terms - never exceeds 75w, which seems to be the sweet spot for sustained cooling without sounding like a jet plane taking off - according to HW Info (not from the wall, my meter thingy is out of battery).