[BIOS 0054] Why does the Custom fan control mode have a locked minimum speed of 27%?

Sorry this is long (or if already reported), TLDR at the bottom. Any insight or news of a potential fix would be greatly appreciated.
Note: My OEM CPU fan is otherwise balanced and undamaged, but mounted in a flimsy shell (the NUC), and the PC case is not soundproof.

For this machine to live in the same room as me, a CPU fan speed of 13% in the Fixed profile is quiet enough. At 13% the CPU rarely gets above 50C while doing most things. An extended benchmark will level-out at ~90C, which of course is not ideal, but ok.
Having said that, I had to disable Turbo (down to 2.6 GHz) to make this possible.

So 13% fixed speed is good at keeping things cool, and certainly better than 0%. 0% being the min speed of all other profiles (Cool, Balanced, Quiet).
Ideally, what I need to continue using this NUC (and when considering purchasing the next iteration) is to reactivate Turbo and have the min speed set at 13% instead of 0%, so the fan stops rushing to get under the off-threshold as soon as it crosses it... then turning itself back off, constantly repeating that cycle.
I was convinced the available Custom settings would allow me this, but it just doesn't get slow enough.

The crux of the problem is: unlike with Fixed, the Custom profile has the benefit of the fan ramping-up and stopping the Turbo 4.5 GHz melting everything, but no matter my settings, the fan will not drop below ~1410 RPM even when everything is nice and cool.
(for Fixed, my Duty Cycle is set at 13% ~654 RPM.)

With Custom control mode I would like the same freedom as I have with Fixed (where I can set the Duty Cycle as low as 0%), and for this minimum fan speed (~1410 RPM) to be removed, so at least others can have their CPU fan turn off below the custom threshold, if that's what they want.

Thank you!
I hope I can live my quiet, Turbo powered dreams in the future.
(Some images attached for reference)

- At temperatures Below any set Fan Off Temperature, the fan constantly spins at ~1410 RPM (unlike the other profiles Cool, Balanced, Quiet & Fixed which will go to 0 RPM).

- At temperatures Above any set Fan Off Temperature (but still below Minimum Temperature), the fan also spins at ~1410 RPM if the Minimum Duty Cycle is set to anything lower than 27%.
(in contrast the Fixed control mode allows anything from 0-100%)

To better assist you please provide the following report and information to continue with your support request.

-Please run the following tool and attach the report generated.

* Use the option under the reply window to attach the report to the thread (Drag and drop here or browse files to attach).

-Could you please confirm if what you are looking forward to achieving is to have the turbo feature enabled in BIOS along with a custom fan profile (13%) and maintain the fan’s RPM at 654 RPM independently of the CPU’s load?

Hi Victor. Thanks for getting back to me.

Let's forget about the Turbo feature for now.

I've been using the Fixed profile at 13%, but I would like to use the Custom profile, so the fan can respond when the CPU temp increases. (I want a Minimum Temperature target.)

I have attached 3 images (status of CPU fan after saving and rebooting):

(a) Default Quiet profile. CPU fan = 0 RPM. As the CPU temperature is currently below the threshold.

(i spliced each pair of photos together to make things easier)

I have been playing with the settings that you want to achieve but I couldn't way to get there, at least not if using the Intel Chassis (are you using a 3rd party chassis?) and in a regular environment of around 23C. I dont know what would happen if the ambient temperature goes as low as Data Center environment -17 or 18C so that CPU and PCH temp reports less than 50C but with my readings, the Fan Speed reports about the same 1490 RPMs.

I would say this is the expected behavior of the system BIOS in order to protect the system from overheating.

Hi, thanks for your reply.
Yes my space is 23C.
I'm using the third party chassis from Cooler Master (MASTERCASE NC100).
(There is no GPU installed in the other slot, just the NUC.)

I'm currently running with the Fixed profile at 13%, and the CPU fan is at 650 RPM.
I want to protect myself from overheating, that's why I want to use the Custom profile.

What is silly IMO is that Cool, Balanced & Quiet let the CPU fan go to 0 RPM.
I want to make the base speed 650 RPM (13%) to stop the fan from needlessly stopping and starting all day.

Can you see if the CPU fan sets itself to 0 RPM when using Cool, Balanced or Quiet?

If so, then it seems there is a bug with Custom profile as it's behaviour is not consistent, and it ignores the Fan of Temperature. It is also not consistent with the custom setting in the Fixed profile, which allows a Minimum Duty Cycle of 13%.

@Crumb   You are responding to a spammer.  I have already reported that post as spam.

Yes, I have witnessed the FAN RPMs = 0 but only for a second until it refreshes and then I get a regular RPM value.

I was also able to set the system as you mentioned, see below: 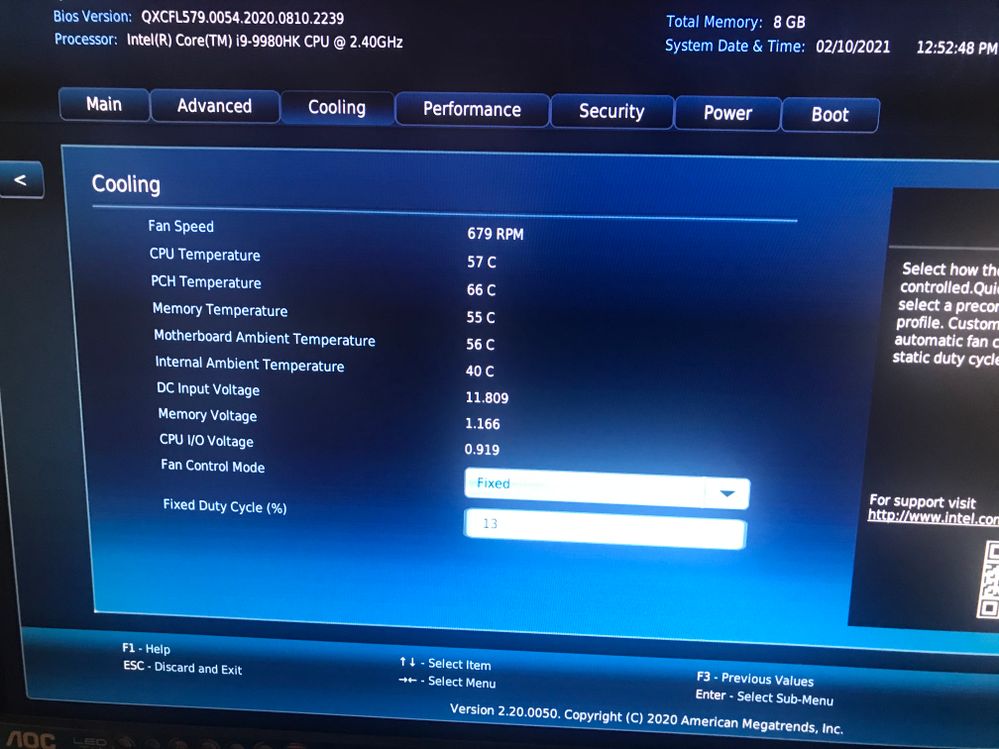 Refer to the following website for further information: https://www.intel.com/content/www/us/en/support/articles/000005946/intel-nuc.html

It may be time for that page to be updated.

I appreciate you peeps trying to replicate my issue.

As you have seen:
any Fixed fan speed can be set, so there is no BIOS failsafe speed.

Please enable this level of control for the Min Duty value in the Custom profile. Thank you.

Please, I need your help if I want to move away from the Fixed profile and actually use this machine.
(I'm happy to test any beta versions of this BIOS when they become available.)

As also mentioned mentioned by n_scott_pearson I was able to replicate the same behavior.

Allow me a couple of days to check with the Product Team and I will get back to you.

This is just to let you know that after replicating this issue I created an internal ticket to investigate this issue and we are currently investigating.

Please keep in mind that this may take some time.

We appreciate the information provided, we will use it to do further research about it on our end and we will update this thread as soon as possible.

FYI - I tried this on my QNX unit and I am seeing the same issues.

We appreciate the feedback and the picture you sent us, if you need to return to BIOS 0054 while we work on this just follow the instructions on the article down below, we will continue to investigate this with your outcome, we will update the thread as soon as possible or we will reach you out via private message if needed.

Please let us investigate this further and we will reach out as soon as possible.

is there any news on this matter, as my NUC9 is having the same issue?

My apologies for the delay in getting back to the community.

Bios 0061 should address this issue.

Can you let me know if even running 0061 your system still experiences this issue?

Refer to the BIOS Release Notes for further details.

thanks for the new BIOS!

Is this intended or is only my NUC9i9 behaving this way?

I have a couple of systems at my lab that I am using for testing and replicating your report and they both behave the same way.

I also checked with other peers and they are seeing the same behavior so I would say that this is the expected behavior. Please let me know if you have any concerns with that.