camm0
Beginner
518 Views
We have a compute element CM11EBv58W + CMCR1AB rugged chassis and carrier board and cannot update the BIOS. (oob v36)
The Intel documentation is incorrect for the UEFI shell method and the machine just won't flash on any of the methods suggested.
There is a support ticket here but BIOS v45 doesn't exist anymore, and none of the other higher BIOS versions are flashed successfully when referencing the recommended process from intel documentation.. both machines just go 'Black screen' then reboot like every other method i've tried..
We have two of exactly the same devices doing exactly the same thing. both brand new fresh from the factory.
Please see attached the photos of
1. the faulty uefi shell commands,
2. recovery mode describing the model and bios version.
I have tried recovery, uefi shell + bios flashing.. all methods fail to update the BIOS for these machines..  any help would be appreciated.. 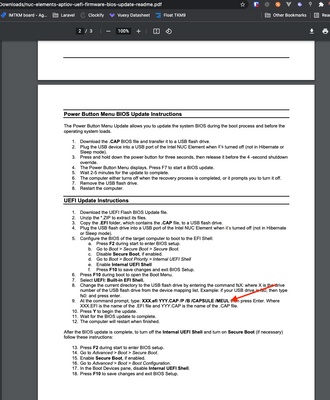 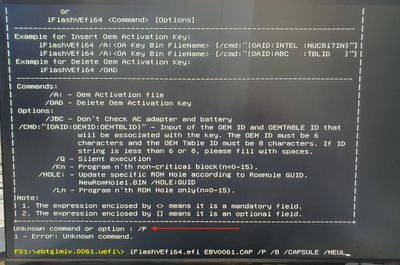 Please allow us to review this further and we will be posting back in the thread as soon as more details are available or in case more information from your end is required.

We are still working on this request. However, we would like to confirm the Serial Numbers of the units.

Note: We will send you an e-mail to the e-mail address associated with your community profile. Please reply with the information request only through the private email in order to avoid exposing the serial numbers in the communities.

Thank you very much for your response through the private email. We just want to say that we did receive the information about the serial numbers and we will continue working on this. As soon as we have more details available, we will be posting here in the thread.