Intel® NUCs
Support for Intel® NUC products
Announcements
The Intel sign-in experience is changing in February to support enhanced security controls. If you sign in, click here for more information.

After updating to a newer BIOS, the LED settings in the NUC software studio are no longer working. A message appeared error retrieving LED data. LEDs cannot be modified at this time.

Does anyone have a similar problem? Reinstalling didn't help either.

I thought it was the new Software Studio drivers but it was not.

It is the new BIOS 0067. Downgrading to the old 0065 BIOS solves the problem and LEDs are working again. 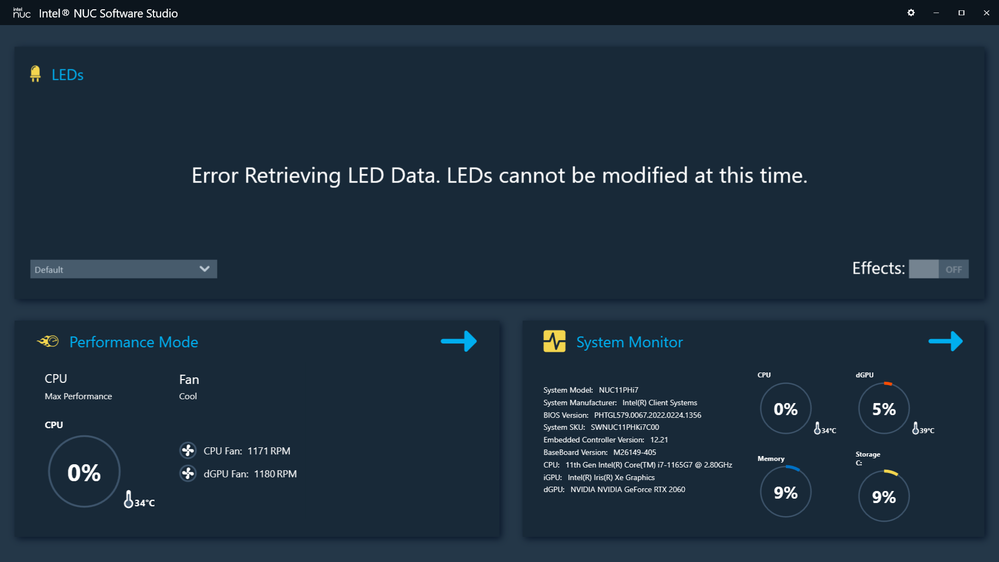 Assuming you have a Intel NUC 11 Enthusiast, here's a direct link to 0065

If you have another NUC, here's a link to all NUC BIOS.

Thank you.   Reinstalled and functional.

itsme
New Contributor I
2,815 Views
In response to svihy

How did you perform the BIOS downgrade to 0065?

According to the release notes this should not be possible or supported because BIOS version 0067 flashed a newer ME FW  version.

Known Errata:
• Due to ME firmware update in version 0067 you cannot downgrade
to version 0065 or earlier.

I downloaded version 065 from the link and run it. The BIOS reinstalled to a lower version.

itsme
New Contributor I
2,786 Views
In response to svihy

Did you download the Express BIOS update  ( windows exe file)  or did you perform a BIOS RECOVERY  by opening the device and pulling the BIOS recovery jumper?

I have not done a BIOS RESET by opening the device and pulling the jumper to reset the BIOS. Only installation via EXE.

itsme
New Contributor I
2,666 Views
In response to svihy

This could have gone very wrong. Could you please check which ME FW version ( see picture ) is reported? you can use HWiNFO to get the information.

The version is attached.PC works without any problem.

I have a NUC11PAHi5.  Since updating the BIOS from 0042 to 0043, the NUC SS was working but decided to update to version 1.15.25.3.  I uninstalled version 1.14.22.2, rebooted and installed version 1.15.25.3 and rebooted again.  The app was nowhere to be found in the Start menu.  Does not even show in Control Panel > Programs and Features as being installed.  When I ran the install again, the only option is to Uninstall.  Tried to install version 1.14.22.2 and the same thing, it does not show in the Start menu.

itsme
New Contributor I
2,797 Views
In response to LorenFromNormalIL

The NUC SS  is only the service. You'll find the application in MS store.

Same Issue. Will note that there is a new studio service driver as of 3-4 days ago ( for NUC 11 Enthusiast) and that the problem exists in both the previous driver and the new one, but is symptomatically more severe in the newer one. Prior to upgrading to the new service driver, the studio software was able to change the colors, but could not disable the LEDS (the disable switch was not working--and no, this is not the sync-issue from switching between enable/disable too rapidly that is documented in the support articles, the software completely lost its ability to toggle the LEDS power. After updating to the new service driver, the entire LED configuration panel in software studio is greyed out and reads "Error Retrieving LED data. LEDS cannot be modified at this time."

The problem for me in rolling back to the previous BIOS image is that the new one fixed some WOL problems I was having. The following attempts to fix this issue were unsuccessful for me:

- Toggling the LED software-control option in the BIOS off and back on again.

We appreciate all the information provided. I understand that you have installed an older BIOS version (0065), are you able to install the latest version (0067) and check if the issue persists?

If the issue persists, please try a BIOS Recovery following the BIOS Recovery by Power Button Menu method in this article: https://www.intel.com/content/www/us/en/support/articles/000033291/intel-nuc.html

Please let me know of the outcome.

I installed the latest BIOS 0067.
But the problem is the same. I can't control the LEDs in Software Studio. In addition, the PC overheats in standby. I went back to version 0065. Where everything is solved.

itsme
New Contributor I
2,467 Views
In response to Steven_Intel

Have not downgraded to 0065 yet.  Not sure it's safe and what procedure is recommended that I use. According to BIOS release notes a downgrade should not even be possible.  Great stuff

And is everything OK in BIOS 0067 after restoring the security jumper? A downgrade is possible.

Downgrading the BIOS can break features and remove security patches that are included with the latest BIOS version. Intel doesn't recommend BIOS downgrades, but you might wish to do so for one of these reasons: You recently updated the BIOS and now have problems with the Intel® NUC. Examples: Computer does not boot, features no longer work.

itsme
New Contributor I
2,296 Views
In response to svihy


And is everything OK in BIOS 0067 after restoring the security jumper?

of course not. It's still the same broken BIOS.

A downgrade is possible.

Downgrading the BIOS can break features...

Have  downgraded many times in the past. But the more important sentence is this one:

If you’re trying to downgrade to a previous BIOS version and its Intel® ME Firmware version is older than that currently on the  motherboard, then the downgrade is NOT supported.


You'll get a mixture of different ME versions. They may be incompatible. Maybe you were lucky that the device still works after the downgrade.  It might even be important to upgrade back to 0067  before you try to upgrade to any newer  BIOS that will be released in the coming weeks or months.

The even more surprinsing fact is,  I quote from the release notes:
Due to ME firmware update in version 0067 you cannot downgrade to version 0065 or earlier.

It looks like the downgrade block is not working properly.

Reading all the current problem reports after  BIOS upgrades on  various 11gen NUCs, it seems Intel really messed up.

From this, one could conclude that the QA tests are not good enough or complete enough for approval.

I will probably downgrade to 0065 using the windows binary and not try to use any BIOS recovery method to downgrade to 0065.  I will keep 0067 on disk to update first before flashing anything newer than 0067.

Based on the information provided, I will continue to further investigate this. As soon as I have an update, I will let you know.

itsme
New Contributor I
1,815 Views
In response to Steven_Intel

any updates on this issue? When can we  expect  an updated BIOS version?
Looks like the page for BIOS 0065  https://www.intel.com/content/www/us/en/download/19729/685050/bios-update-phtgl579.html   also disappeared and redirected to the homepage.