I have recently purchased a brand new NUC 10i7FNKPA

When I initially switched on the NUC, the headphones and microphone worked fine

I receive a message stating "Plug in Speaker, Headset or Headphone" 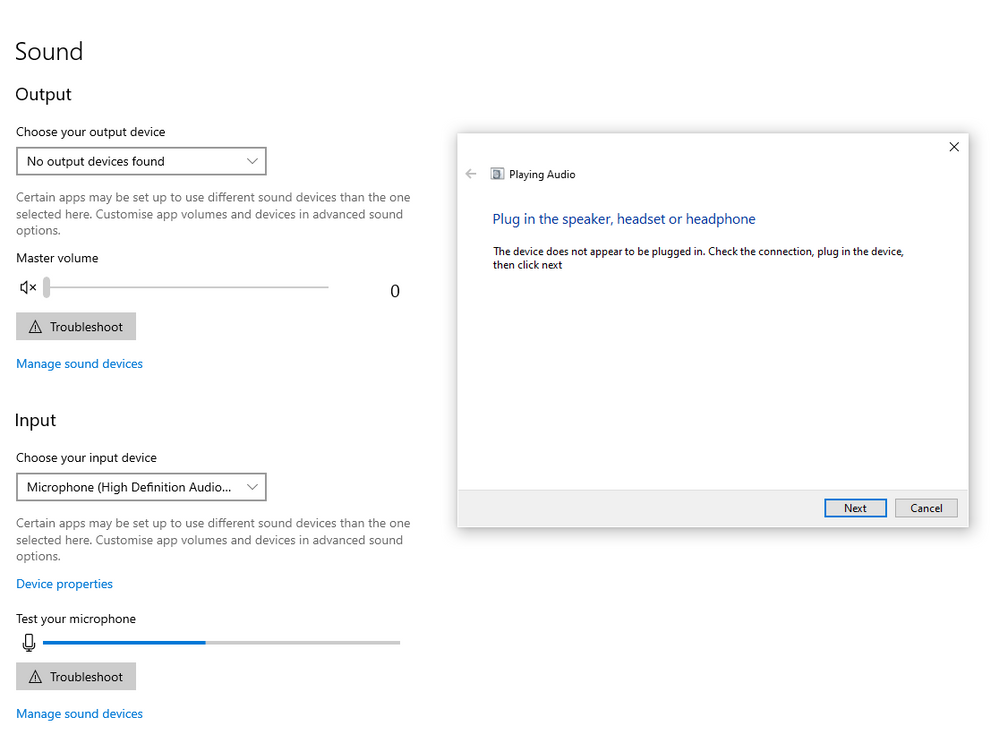 Please can you help

This is my understanding; - Any driver will match to a device through the Hardware ID, these must match

As shown in the attachments the prefix of the hardware ID differs, clearly the Realtek person writing the software driver assumed this would be  "INTELAUDIO" but the Intel person configuring the hardware kept this name as the generic OEM name "HDAUDIO"

This is shown in the screen grab

Unfortunately the Realtek driver is looking for the following

As shown in the screengrabs  the prefix of the hardware ID on the driver is "INTELAUDIO" but on the Intel device it is "HDAUDIO", these do not match

Intel will need to confirm and release a firmware update to correct  the name  or another version of the Realtek driver needs to be released with  the correct name (the hardware IDs must match), either way I do not know when this will happen?

Sandhuman, Thank you very much for providing that information.

Search engines would do better at locating this thread if the title said "3.5 mm" instead of "3.5 inch". The latter would be about 1 mm bigger than the caliber of the fearsome Krupp 88 mm Flak-18 of WW-II.

Since in my NUC10i7FNH I don't have problem with the Realtek Audio Driver and the audio works from the 3.5 mm jack, I decided to perform a test. I have to emphasize that it is crucial to have installed the Chipset Software and Management Engine  Driver (downloaded from the Download Center), before starting with any driver installation:

1. From the Apps & Features I've uninstalled the currently installed Realtek Audio Driver and rebooted my NUC.  After reboot you can see the Device Manager and the Device IDs in the attached IntelDisplayAudioID.png and RealtekAudioID.png. As you can see in both devices the ID is INTELAUDIO.... In addition please not an unidentified device in Other Devices.

3. So, in conclusion, I don't see problem with the driver ID.

I have re-booted the machine

After reboot you can see the Device Manager and the Device IDs in the attached IntelDisplayAudioID.png and DAudioID.png.

As you can see in both devices the ID is HDAUDIO... and not INTELAUDIO....

I have no Other Devices.

There is no change - the Realtek driver will not install

This is because the Realtek driver is looking for the hardware ID of INTELAUDIO....(like in your machine) and not HDAUDIO.... (like in my machine)

Your NUC10i7FNH has had the Realtek soundcard and associated firmware correctly configured to show a hardware ID of INTELAUDIO...... (which the driver is expecting)

MyNUC10i7FNKPA has had the Realtek soundcard and associated firmware incorrectly configured to show a hardware ID of HDAUDIO...... (which the driver is NOT expecting).

Intel have now tested themselves and offered a warranty replacement

I agree that must be a problem. As you know you are not alone with the same problem. I just wanted to share the information I have, from NUC where this driver works. BTW, I have updated BIOS using BIOS Recovery from the Power Button menu, rather than the express method or F7 method. May be this make this trick?

As Such, I have purchased a bluetooth headset which works fine

Can you close this support ticket albeit it is unresolved

Thank you for your help, it has really been appreciated

Unfortunately, I have no more time to try and resolve this issue, I have rejected the Intel offer to exercise the warranty  because I start a new job on Monday and I need the NUC

Hello Sandhuman, Thank you very much for sharing those updates.

In reference to, "Can we close this support ticket albeit it is unresolved

Yes, sure, no problem, we can close the ticket for this case. What we were going to suggest next was to replace the unit, but we completely understand why that option is not available for you anymore.

All the feedback provided by our customers is very important for Intel®, We will send your comments to the proper department for them to be aware of your suggestions and recommendations to avoid, as you mentioned, this problem in the future.

Any other inquiries, do not hesitate to contact us again.

@Alberto_R_Intel1 Can I ask why you are offering this customer a replacement yet I am being told there is no stock and I have to accept a refund at your recommended retail price? This is shockingly bad customer service, a month with faulty hardware and still no resolution. If this experience is anything like how you dealt with Apple I can completely see why they dropped you. I personally am reviewing Intel equipment used in my business and will be actively pursuing altertnatives.