In Security Mitigation events found in Windows Event Viewer there are events recorded for DLL's related to Intel Graphics stating that they are not signed properly. At the moment these are still allowed to be loaded as 'Code Integrity Guard' in Windows Defender Security Centre https://docs.microsoft.com/en-us/windows/threat-protection/windows-defender-exploit-guard/customize-... Exploit Protection is currently only set to 'Audit' mode for svchost.exe (the default Windows 10 setting) rather than enabled fully.

The two DLL's that are flagged in Event Viewer are as follows, however there are other Intel DLL's in System32 that are signed the same way.

Is there a reason why these aren't signed by Intel using a proper trusted root certificate?

Screenshot of one of the Event Viewer entries:

Thank you so much for contacting us.We received your thread and I understand that you are having issues with our latest Intel drivers for your Intel NUC5i7RYH.Please accept our apologies for the inconvenience that this could be causing.All the information attached to the account was extremely helpful.We are currently performing further research about the issue that you have been experiencing in order to provide you with a more accurate answer regarding the problem.This may cause a brief delay on our replies; I really appreciate your patience.As soon as we have the results I will share the resolution with you. Hope to hear from you soon.Best regards,Diego S.
0 Kudos
Copy link
Share
Reply

Thank you for your patience.I just wanted to inform you that we are reviewing your case.As soon as I have an answer I will get in touch with you.Best Regards,Diego S.
In response to idata
0 Kudos
Copy link
Share
Reply

That's fine. Thanks for keeping me informed.

Thank you for your patience, we really appreciate it.We have released a new 15.40 driver, version 15.40.38.4963 that has gone through WHQL (Windows Hardware Quality Labs) thus there should be no issue with the .dll signatures.Can you go ahead please perform an update and then let us know the outcome?Here is the direct download link: https://downloadcenter.intel.com/download/27780I hope to hear from you soon.Best Regards, Diego S.
In response to idata
0 Kudos
Copy link
Share
Reply

I was checking your case, and I just wanted to know if there is anything else that we can do for you at this time.Please do not hesitate on replying back if you need more assistance.Best Regards,Diego S.
In response to idata
0 Kudos
Copy link
Share
Reply

This problem is still present (as of 06/01/2022). Yesterday I downloaded Intel graphics drivers (igfx_win_101.1994.exe) from Intel's site (which arrived with the same problem) and today Windows Update downgraded the driver version; however, I ended up with the same problem. Why is this difficult to get right on your side? Thanks

Code Integrity determined that a process (\Device\HarddiskVolume5\ProgramData\Microsoft\Windows Defender\Platform\4.18.2203.5-0\MsMpEng.exe) attempted to load \Device\HarddiskVolume5\Windows\System32\DriverStore\FileRepository\iigd_dch.inf_amd64_0c2fb894eee0c51f\igd10iumd64.dll that did not meet the Custom 3 / Antimalware signing level requirements. 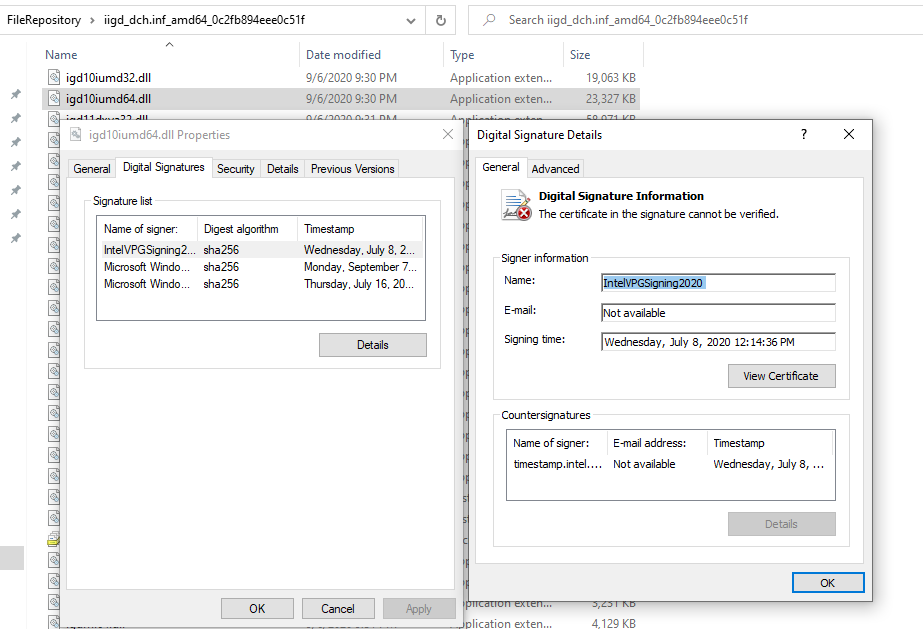 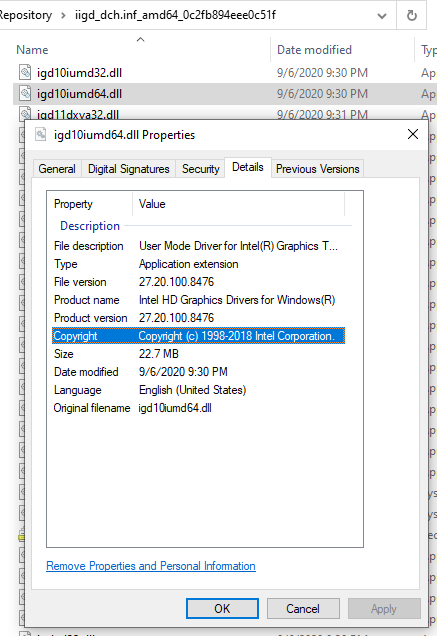