My NUC11 seems to have significant problems that manifest as crashes and hangs seemingly related to graphics.   System will boot sometimes into the OS (Windows 10 64bit 21H2), run for a while then screen goes black or sometimes all garbled, sometimes with obnoxious audio spewing out as well.   Sometimes screen will go garbled during boot while showing the NUC logo and it also happens while in the BIOS config screen.  From another machine during troubleshooting, I have continuous ping running, and when these events happen, its network dies as well.  Interestingly the fan is still running and I do see activity lights on the LAN connection.

Other circumstantial weirdness - the realtek driver updates had some weird trouble installing.  Via the Intel Support experience the package said it needed updating, would try to update, report success, then after reboot the page suggested it wasn't updated.   Then I tried to install the direct download and that seemed to have worked but also took a few reboots.

I'm at a loss here.  I have the Driver & Support Assistant report if that's useful(?)

Here are some highlights:

some screen shots of what happens (other than just going black): 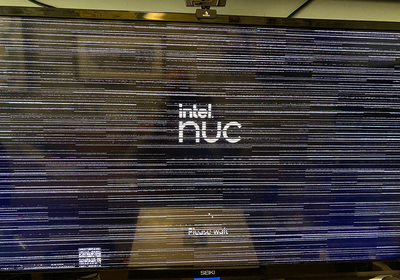 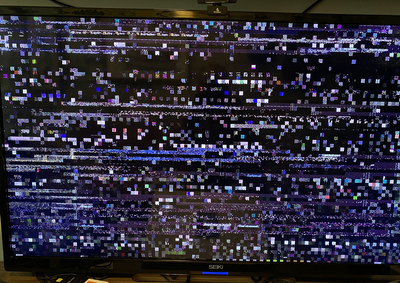 Btw, I should add that I've tried various display connections via HDMI, DisplayPort, USB-C to HDMI connections - all the same.

I suggest that you should run memory test, using MemTest86.

That was a good thought (and I should have thought of that).   But... I'm not sure it's the memory itself.  I have a suspicion there's either something going on with the "upper" sodimm slot, or perhaps the way the system is handling fully loaded 2x32 slots at 3200 speed memory, or maybe a thermal issue (?)

Is there some kind of lower level smbios or SOC logging I could enable to troubleshoot further?  My next step, begrudgingly is to go buy a second set of 2x32 memory to try.

Tests 2&3 - Ran Windows memory diag on each stick individually in the "lower/closer-to-the-board" slot (both passed).  I ran the Windows diag because I had trouble getting machine to boot back into the memtest usb due to screen not displaying the F10 boot menu or hanging trying to get into it.

Test 4 - Not a memtest, but took the Samsung memory from the NUC10 in various configs (1x32, 2x32) and machine seemed to operate just fine, didn't experience any failures after a bit of usage.

I agree with Leon; this looks like a memory failure/compatibility issue.

The weirdness you saw with the RealTek driver is perfectly normal. The installer itself uninstalls the old driver, reboots, installs the new driver and then reboots again. Having the driver show up in IDSA again is simply a bug in IDSA, not an indication of a problem or any weirdness (you can hide/ignore the driver installation notification in IDSA).

Welp, as annoyed as I am, I think you're both right.  I ran a whole day on singles of those 32G sticks, swapped part way - they both seem fine as single sodimms.   I begrudgingly ordered 2x32 3200 (Samsung) yesterday which showed up today (praise be to Amazon one-day delivery) and have been up and running for about an hour.   Someone knock on wood.

What kind of compat issue would be at play here (now I'm just curious).  I thought Crucial (Micron) was supposed to be top-end stuff?  One thing I should note is that this all seemingly only started after the BIOS update to v42.  Is it possible it's not the RAM directly but some compat issue created by that update?

Well, it could certainly be an incompatibility between this particular memory and the version of the Memory Reference Code (MRC, which handles memory initialization) included in the BIOS. I almost exclusively use Crucial memory myself, so this concerns me as well. I will check with the NUC development team (which I was a member of before I retired) and see if they have any thoughts on this issue.

FYI, the Crucial DDR4-3200 (CT2K32G4SFD832A) appears on the Compatible memory for NUC11PAHi7. So, could be there is a problem with the specific SO DIMM.

I agree. I looked at the L/L Specs for the CT2K32G4SFD832A and they would appear to be compliant with the requirements laid out for the PA NUCs. This leaves one (or both) of these SODIMMs as being the culprit for this issue.

What could I do to further debug?  While I am unblocked using the Samsung sticks, as I mentioned above - both passed all the memory testing I've been able to run - dual installed into a NUC10, one-at-a-time tests in the NUC11.   The machine halts when trying to memtest them both installed on in the 11.   Or perhaps I just try to cut bait and send them back to Newegg.

I would simply send them back and get them replaced.

Based on the recommendations, we would like to know if you need further assistance.

Since we have not heard back from you, we will close this thread. If you need any additional information, please submit a new question, as this thread will no longer be monitored.

I only just yesterday received the replacement RAM from Newegg and will test with the fresh 2x32 Crucial sticks soon.

Which sticks did you purchase?

The ones that I'm using currently (and working) are Samsung M471A4G43AB1-CWE.  The Crucial sticks are just a RMA swap of what I had and weren't working, CT2K32G4SFD832A.

Got it, I might have to setup a return/RMA with my crucial sticks. I am having the exact same issue with the same machine as you and same exact sticks.

let me try to test my new ones today - if they also don't work, then i'd say that's pretty suspect.

I just tested the new Crucial sticks and they fail as well - machine wouldn't boot and eventually failed with the "detect multiple post attempts" error again.  Either this is extreme bad luck or there is some sort of incompatibility.

FYI, I installed that new BIOS v43 yesterday and swapped/re-tested with the Crucial sticks and they are now working so far.   I just checked now to include the download link from the NUC11PAH download page and it no longer see it listed.  I have no idea what that means, but FWIW, it does seem to be a compat issue probably with the MRC (which was rev'd) and not a problem with the physical memory after all.

I do see it listed here, however v42 is advertised as the latest, not v43:

I believe I might be having the same issue here on a different NUC, 2x32 crucial memory. It looks like the resolution is to purchase samsung sticks to replace the crucial ones? I can also install windows to try and run a memtest.