I have a NUC11TNHv5 which does not allow me to access BIOS when booting with a single displayport screen connected to the thunderbold port. I have been paying around with the graphics and security settings, but did not find a solution.

How to boot this system into BIOS and show boot menu Grub?

When I also connect an HDMI monitor it is working smoothly and in the operating system I see both monitors active.
For now I have chosen for attaching both HDMI and displayport to the same screen and duplicate screens in operating system so I can benefit from the better quality of displayport. Only for entrance of BIOS and selection of boot manager I have to temporarily have to switch to HDMI and back to displayport.

Thx for the advice. Already tried that and also tried thunderbold legacy mode in Security settings. No luck yet

Thank you for posting on the Intel communities.

In this case, please try updating the Thunderbolt drivers for your Intel® NUC, you can download it at the following link:

In case the issue persists after updating the drivers, please download and install the Intel System Support Utility (Intel SSU):

Open the application and select "Everything" click on "Scan" to see the system and device information. By default, Intel SSU will take you to the "Summary View". Click on the menu where it says "Summary" to change to "Detailed View".

Unfortunately Josue, it did not workout, which was also expected by me.
In my opinion it cannot be a operating system driver issue, entering BIOS happens before starting an operating system and/or bootloader.

At power on the displayport display is recognized, while I can see the connected led indicator set to ON and in a second to OFF. But after that the system stays on, but does not show BIOS after pressing  F2. When I connect an hdmi monitor without rebooting it immediately shows the BIOS screen.

Similar when not pressing F2, though wanting to select a bootloader option.

As requested I have attached the ssu results. Hopefully it contains some useful information.

In this case, the issue could be caused because the monitor does not natively support 1024x768 screen resolution. If this is the case, it will be expected behavior.

You can try to access the BIOS using Windows recovery options:

Is the need for a native support of 1024*768 for the displayport, to be able to enter BIOS at boottime, a specific requirement for the NUC11 or for all brands?

When buying a new screen how to know it does support the required 1024*768 resolution to be able to connect only 1 monitor straight to the thunderbolt/ displayport port?

For instance how to know whether C34H890 does support the NUC11HHv5 entering BIOS only connected by a single straight thunderbolt/displayport cable?

Thanks again for all replies

I will proceed to check your inquiries internally and post back soon with a response.

In the meantime, please let me know if you were able to perform the steps provided in the previous post and the results of them.

In this case, we have performed a lab trying to replicate the issue. We used the same Intel® NUC model with the latest BIOS (0062). We connected the display via thunderbolt and we were able to access the BIOS without any issues.

Please let me know if you have tested connecting the display with HDMI and try to access the BIOS. I understand you have a second display that can make this, however, we would like to know if the one having issues can also do it.

Thank you for putting this effort in my issue, though I think the situation still is not clear. So I have included a cabling and functionality overview which hopefully will clarify the situation. (Note: I have only 1 screen)

As mentioned earlier I have tried all kinds of changes in BIOS setup for "IDG Primary Video Port" and "thunderbold legacy mode in Security settings".

Setup 2 is the one I would like to use. 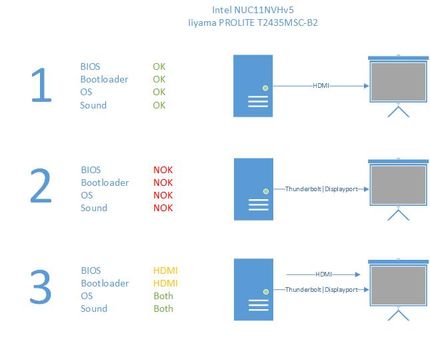 Thanks for the information provided so far. I will continue with the research to confirm if we have any further troubleshooting steps.

As soon as I have any details I will let you know.

In this case, we recommend that you directly contact Intel Customer Support to initiate the RMA process (you cannot do this through the forums). Here are pages where you can look up contact information, including local/country phone numbers, by geography:

• You can use the online forms service or email, but I actually recommend calling them directly. The above links provide local or toll-free numbers in most countries and support most local languages.