My Intel NUC8i3BEK seems to have an issue which occurs after resuming from Modern Standby.

When I plug my USB-C stick into the Thunderbolt port, it functions normally. However, if the NUC goes into Modern Standby and the stick is still plugged in, after resuming from Modern Standby, Windows will enter in a notification loop showing the message "Unrecognized USB device". It seems like a connection is trying to be established, but it is immediately dropped. I have attached a video with sound in which you can hear the "usb disconnected" sound effect being played immediately after the "usb connected" sound.

I have tried to find a solution by changing severeal settings in the BIOS, such as ASPM support, without success. But because I didn't mind reinstalling the Operating System, I gave Legacy S3 Standby a chance. I was surprised to see that the issue is not present in S3 Standby.

However, I do not wish to use S3 Standby. With Modern Standby, the internet connection is active during standby, and that is essential for me. I switched back to Modern Standby, and after installing all updates and drivers, the USB issue came back.

Initially, I expected my USB-C stick to be broken, but since it functions normally under S3, I believe the problem is on the NUC side.

Any idea what could be causing this issue? Is there anything else I could try?

1- Did this configuration (Intel NUC + USB-C device + Modern Standby) work fine before at any point? If yes, was there any hardware or software change (Windows updates, BIOS or driver updates) related to the point when the issue started?

2- Is the USB-C device connected directly to the Intel® NUC's USB Type-C* port? Or are you using any kind of USB HUB?

3- For testing purposes, have you checked if this issue happens with other USB-C devices?

5- Please run the Intel® System Support Utility (Intel® SSU) and attach the report to this thread to gather more details about your system.

1. The NUC is quite new: right after unboxing it ~2 months ago, I installed all updates and optional drivers provided by Windows Update (including the BIOS update) before I started to use it. Unfortunately, I'm not able to tell if my issue was present in a previous BIOS/software version or not.

2. Yes, the USB-C device is connected directly to the Thunderbolt/USB-C port.

Interestingly, once the "unrecognized usb" loop starts, even after restarting Windows (without unplugging the NUC from the power cord), the loop is still present. The only way to stop it is to physically disconnect and reconnect the USB-C stick.

3. Unfortunately, I am not able to verify this. This is my first and only USB-C device at the moment.

5. I have attached the SSU report in the files section.

I'm back with an update on my NUC.

Since my last post, I've updated the BIOS and the HDMI firmware to the latest verison. The USB-C issue still persists.

The BIOS upgrade (85>87) was a bit weird, though. I initially used the power button F4 BIOS recovery method, which didn't flash Management Engine: 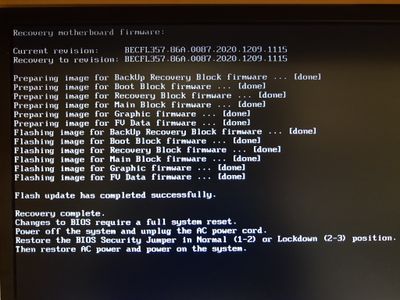 Going into the BIOS, the version was 87, but the Management Engine version was the same as it was in BIOS version 85.

So I entered the power button menu again and used the F7 BIOS update option, which flashed Management Engine: 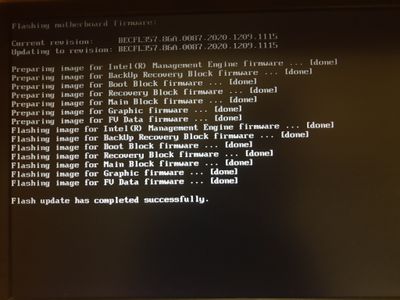 After this, the updated ME version showed up in BIOS.

Is power button recovery not supposed to flash ME?

This is odd, it should have updated the ME F/W in this case.

Interesting, thanks for the explanation.

Thank you for your response and for the information.

We understand that even after doing a BIOS recovery using the F7 BIOS update option the USB-C issue still persists. Please allow us to check this further and we will be posting back in the thread as soon as we have more details available.

Can you please try the following setting in BIOS and report back, I had similar issues and this resolved the situation:

Let  me know the results.

Thanks for the suggestion. I've just enabled Thunderbolt Boot in BIOS, and sadly, my issue persists.

Since the issue persists, please allow us to review this further. We will be posting back in the thread as soon as possible.

My apologies for the delay in getting back to you.

I have been testing a similar system/configuration connected to a Thunderbolt docking station and I have multiple USB devices connected to it, mainly USB sticks and USB hard drives and I havent been able to replicate the issue that you are reporting.

I experienced some strange behavior before, similar to what you reported but it was corrected by enabling "Thunderbolt Boot" in BIOS.

I dont really have a good solution at this point other than replacing the NUC unit and see if the issue persists after that and then re-escalate this issue.

Here is our contact Intel information: https://www.intel.com/content/www/us/en/support/contact-support.html#@7 We do not provide warranty replacement over the Community so I would recommend that you reach out to us via Phone. WebTicketing or Chat.

I'll see what I can do about it.

Thank you for your time!

We have not heard back from you since your last post on February 23rd so we will proceed to close this thread now. In case you haven't tried yet, we recommend following Ronny's advice about contacting Intel® Customer Support to check warranty options.

Thank you for your time and best regards,