I bought a Crucial P2 CT1000P2SSD8 NVMe SSD, put it into an external USB 3.1 case and connected it to my NUC via one of the back thunderbolt ports (with USB-C to USB-C cable).

Crystal Disk Mark shows a sequential write rate of only around 100 MB/s while it's 1000 MB/s when connected to the front USB-C port of the NUC. Also the reading speed is slower on thunderbolt compared to USB-C on the front.

Why is that so? Are the thunderbolt ports on the back incompatible to USB 3.1?

Why is that so? Are the thunderbolt ports on the back incompatible to USB 3.1? 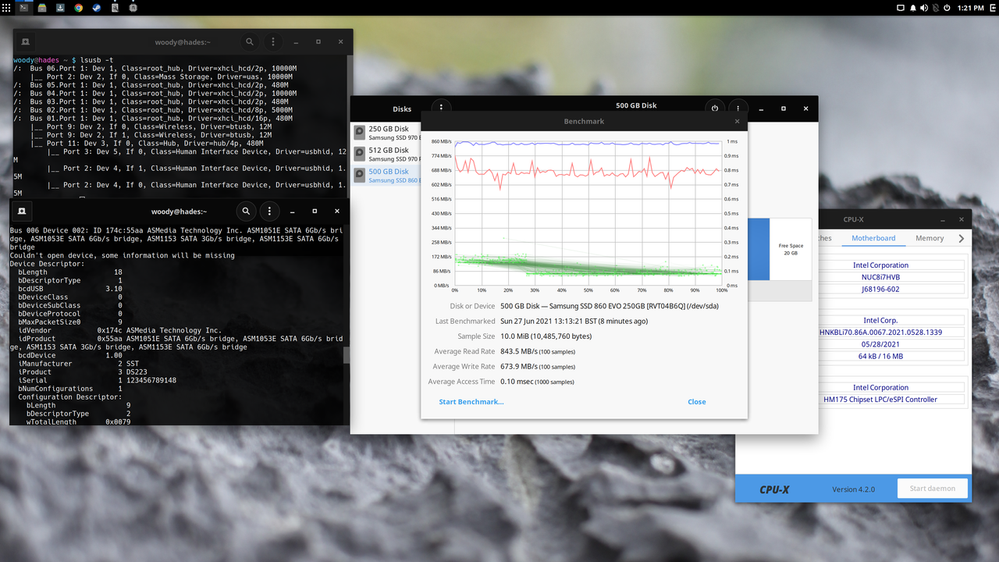 Only other tips I can suggest is to make sure all your drive firmware is up to date, not just for the drive/s themselves but for the controller onboard the host device too (In my case an ASMedia ASM1352R - F/W 180328_b5_20_60)

Thanks for your answer. I bought another external adapter and will see if it works better. I think the one I use now may be the problem. Unfortunately it's not easy to find a good external case for M.2 drives.

powerarmour
Valued Contributor I
1,358 Views
In response to Asgard

Indeed, many external drive cases can be a bit of lottery unfortunately, and you either have to get lucky or do a bit of research/read reviews on them before you buy. In general I've found devices with ASMedia chipsets/controllers perform well though, and often have good firmware support options available.

I bought one from Sabrent now. Don't know if it's good but it isn't that cheap and looks well made. My actual one is from Fideco which I think is just some chinese brand. It works rather well on the front USB-C but read speed is 600 MB/s and write speed is 1000 MB/s which can't be right in my opinion. On the thunderbolt ports I can't even use the drive with OBS as it immediately skips hundrets of frames when starting to record.

Attached some benchmarks. The one with 577 MB write speed is on thunderbolt and the one with 1012 is on the front USB-C. 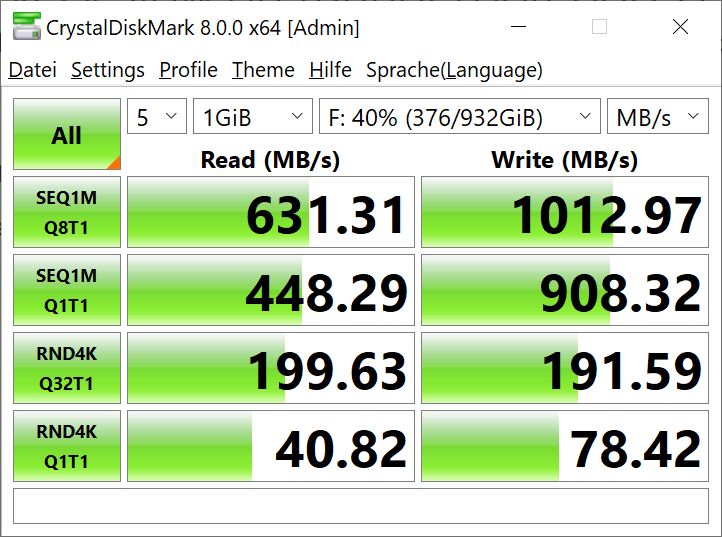 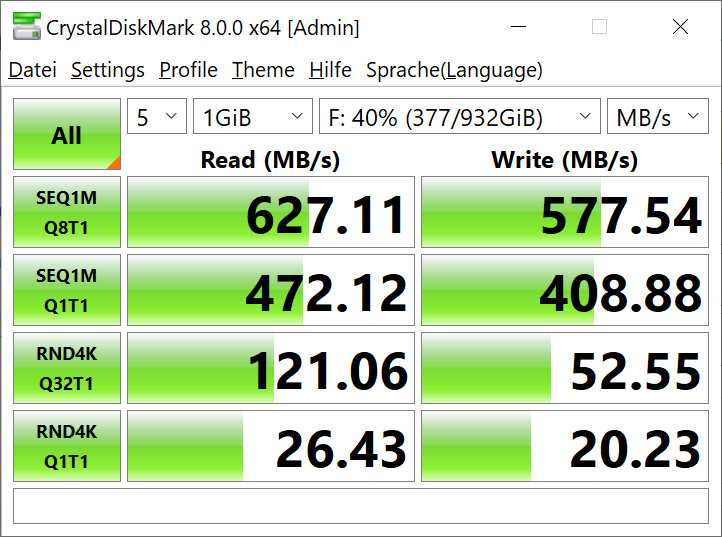 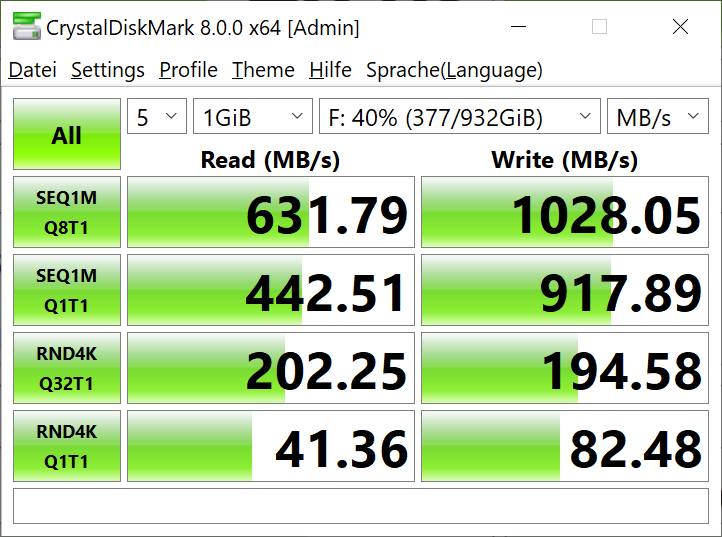 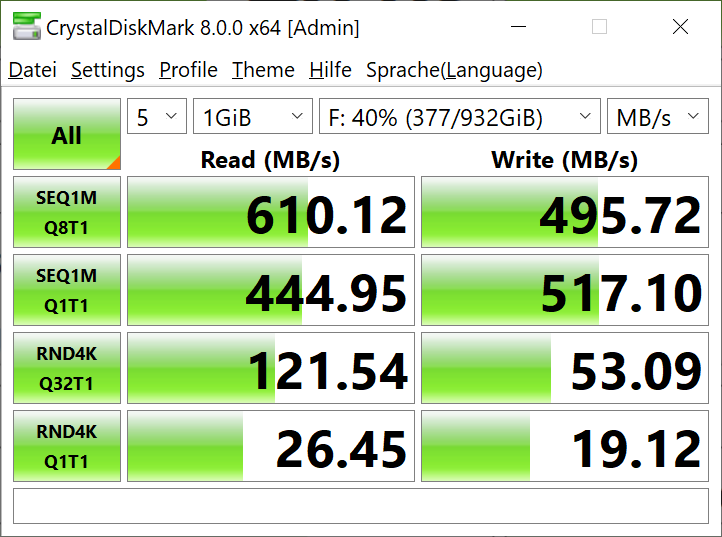 powerarmour
Valued Contributor I
1,286 Views
In response to Asgard

Certainly interesting, and yes if you deactivate TB it'll deactivate the ports unfortunately.

For me on my HVK all the USB 3.1 Gen 2 ports perform roughly the same (at least within margin of error on Linux), with the same USB-C cable. It might be a cable issue though as those numbers certainly look low for an external NVMe drive either way, but hard to be sure without testing etc.

The Intel Driver Assistant is always running on this machine, it says all drivers are up to date. What would reinstalling help? The system is just a few months old...

powerarmour
Valued Contributor I
1,252 Views
In response to Asgard

That's fair enough, if they're up to date there obviously wouldn't be any benefit there. It was just something else to try to fix the bottleneck.

I now bought a really good USB 3.2 Gen 2 Cable which costs half the price of the enclosement, and what do I get... it's even slower on thunderbolt than the cable that came with the enclosement! 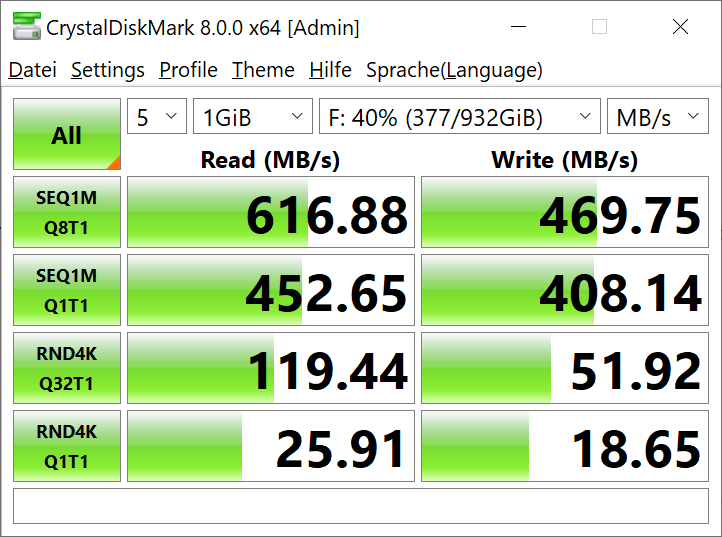 I just ran a set of tests on my production HV unit. Here is the results:

While this shows a slightly better result on the HV's Front USB-C, the results are nothing like what you have described. I think you need to look more-carefully at the hardware that you are using.

Then which software do you use for benchmarking? I figured out that other benchmarking software like "ATTO Disk Benchmark" show different results when it comes to read speed. While with Crystal Disk Mark the read speed is always slower than the write speed, with ATTO they are nearly the same on front USB-C where around 1 GB/s is ok, I think. But on thunderbolt also ATTO shows very very veeery bad speed especially when writing small files: 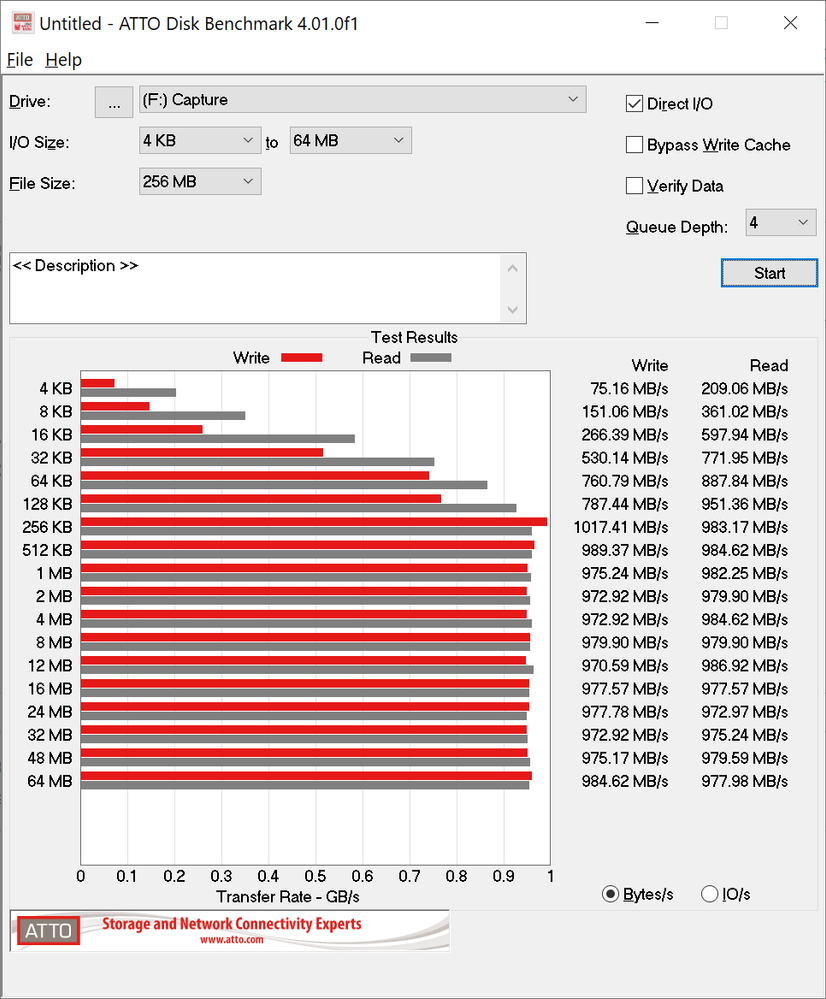 I searched for the thunderbolt controller in Windows control center, but I can't find anything containing "Thunderbolt" in there. Not on system components, not on USB controllers. When starting the Intel Driver & Support Assistant, it shows all drivers are up to date, but also there I can't find anything regarding "Thunderbolt". So I downloaded "Thunderbolt Software" from Intel website and tried to install it. It can't be installed because of some "serious error".

Next thing is that the Intel Driver & Support Assistant shows my model as "NUC8i7HVB" which doesn't even exist, it seems?

Then I noticed that the driver updater from CCleaner shows I have more than 40 outdated drivers, mostly by Intel while the Intel Driver & Support Assistant still shows all drivers are up to date?

powerarmour
Valued Contributor I
1,152 Views
In response to Asgard

Try updating the TB firmware here if you haven't already, could be that?

Also the "NUC8i7HVB" is the correct name for the actual motherboard: 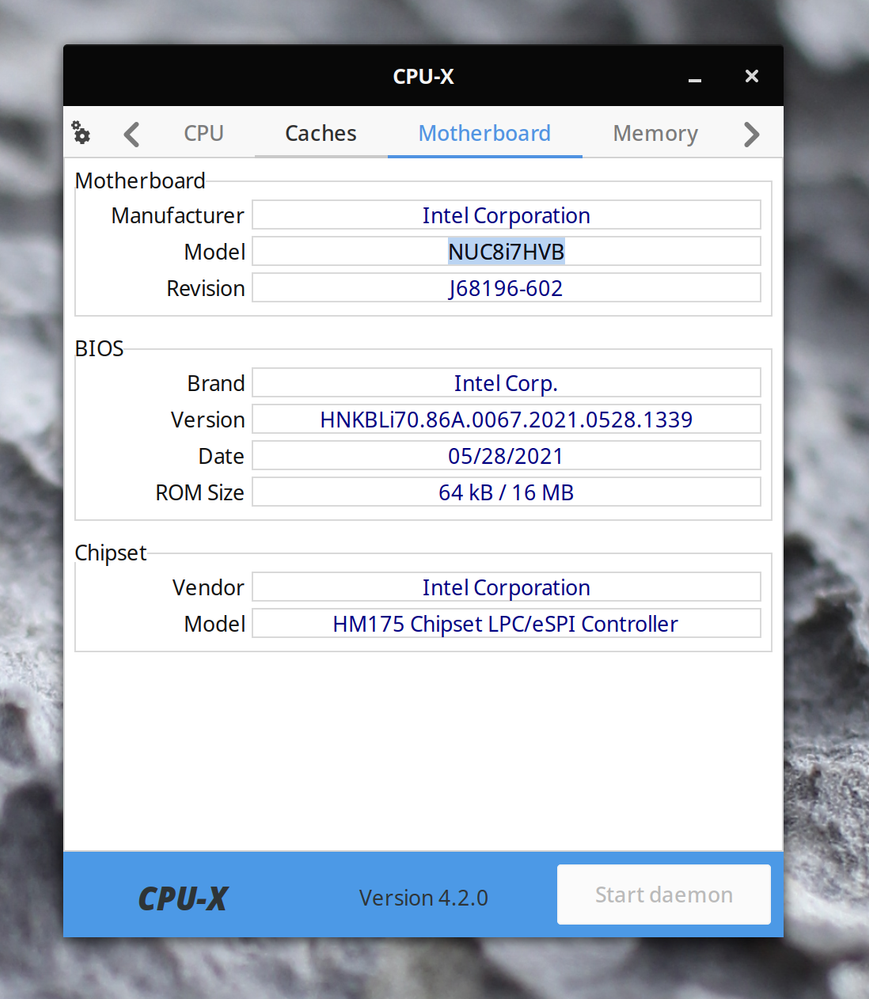 Well, devices on other USB ports *can* affect the performance of the TBT ports; it is how significant this affect will actually be that is the question. The TBT controller relies on PCIe lanes generated by the PCH (the chipset). The PCH, in turn, relies on the DMI Bus connection from the processor. The current implementation of the DMI bus is essentially equivalent to a PCIe x4 connection. This bandwidth is being shared by TBT (PCIe x4), 3x USB 2.0, 8x USB 3.0 (but not USB 3.1), 2x LAN, WiFi, 2x NVMe (PCIe x4) plus the 'slow' buses (HDA Bus (Audio), SPI Bus (TPM), LPC Bus (EC), SMBus, I2C, MEI (ME), etc.). You see the issue? That the DMI bus can be saturated goes without saying. Intel will argue that this doesn't occur all that often. In the very near future, though, they are doubling the width of the DMI bus. What does that say? IMHO, they should have widened it years ago!

Sorry, did not see your last post until now. Ok, so you say literally everything except USB 3.1 shares the same bandwith? That would explain why the drive is much faster on USB 3.1 on the front. Because on USB 3.0 I have 3 hubs, one for normal periphery like printer, speakers and so on. One just for keyboard and mouse. And the third for 2 external HDD drives from which one is always active. Also a capture card is connected to a fourth USB 3.0 port. In addition internet runs over LAN. And monitor is connected to display port which also shares bandwith with thunderbolt if I am right. This all together could then be the reason for dropping bandwith on thunderbolt, right? Yeah, Intel should have thought about that problem earlier as you don't have to be a rocket scientist to see the problem.

Whether any of these USB devices (even the hubs) are going to disaffect TBT is going to be dependent upon what these devices are doing simultaneously. If they are not actively doing something while the throughput test is running, then they are not going to have any affect on the test. While it is true that you will see a performance improvement using the USB 3.1 Gen 2 ports, the improvement is going to be minimal. I don't believe that this would ever be enough to explain why you are seeing the large differences that you reported. I think something else is causing this and am guessing that the USB device may be the (inferior) culprit. It's totally up to you to decide whether you want to spend the money to get an alternative to try, however.

That's roughly what I'm seeing also, it's totally logical that a dedicated 3.1 Gen 2 USB port would be a bit faster than a TB port (due to multiplex overhead etc) but it shouldn't be that much faster, certainly no more than 10-15% or so.

Tried to update the firmware, but get this error message:

When trying to install the Intel Thunderbolt software, I get this error message: 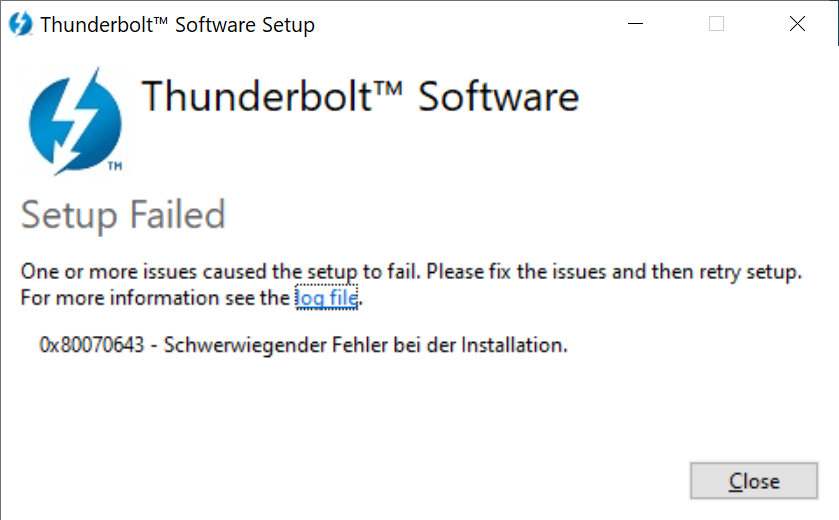 I now managed to install the Thunderbolt Software just after rebooting. But the firmware updater still says that the Thunderbolt UWD software is not installed. Perhaps I would have to connect a real thunderbolt device to the thunderbolt ports? That whole stuff is really complicated and I am willing to give up and just use the external enclosure on the front USB-C although this looks bad and I did not want that cable stuff in front of my NUC.