Installed a fresh copy of Windows 10 on a new NUC9VXQNX and I'm having some odd issues - biggest is that the NUC won't restart; it just goes through the motion and then sits with the power light on and no activity. During the install I had the same issue - just left it and then held the power button in and powered on again to complete the install.

Windows will shutdown ok and power off. I've tried disabling fast restart in Windows power options but that didn't help.

Anyone else seen this?

Boot device is a Samsung 970 EVO Plus in the compute element.

Other weird thing is sometimes it won't power on the first time; the power light comes on, fans spin up, then it turns off again. I've disassembled and re-seated everything but this persists.

Update: I opened a case with Intel and after unsuccessful troubleshooting was offered a refund as no replacement units were available.

Decided to return to the retailer instead and received a replacement today: it works without showing any of the symptoms I experienced first time around. Same RAM (the original 64GB kit)  and SSD.

Still no idea what the problem was, but none of the reset or recovery methods helped.

Update: have tried to isolate the issue but no progress.

Switched out the 2x32GB sticks to 2x16GB from another NUC and the problem persists.

It does look more and more like 2-3 (possibly related) issues:

1. Machine fails to POST about 30% of the time. Lights come on, fans spin, then it shuts off. Sometimes it repeats that cycle a few times by itself - almost like it's retrying - and then proceeds to either boot or not.

2. Restart from Windows (almost) never works. I have now seen it work twice out of dozens of attempts.

Still - when Windows boots it works fine and remains stable.

When you power on, are you seeing the Power LED flashing?

If you remove the SODIMMs, do you see the Power LED flashing?

What is the speed of the SODIMMs you have?

The power LED isn't flashing when I see the problem - but yes it does flash without SODIMMs installed. I haven't seen it flash at any other time (other than when holding it in to enter the power button menu)

I've noticed the machine POSTs reliably if it has been switched off for 30 minutes or so. Powering on immediately after a shutdown is hit or miss.

MRoss5200
Valued Contributor I
1,345 Views
Solved Jump to solution
In response to JimBC

This will delete and then reinstall the Secure Boot key. Sometimes this key can get corrupted so doing this may fix your boot issue. I would also try the system with only the internal GPU and not a x16 PCIe GPU installed.

Thanks for the suggestion; I tried the secure boot key procedure however the issue persists.

I'm not using an add-in GPU yet - just the internal.

MRoss5200
Valued Contributor I
1,323 Views
Solved Jump to solution
In response to JimBC

One thing to know is even though the SoDIMMs you are using are on Crucial's compatibility list does not mean they are 100% compatible with Intel's products. Unless Intel has tested them, you have a 50/50 chance of them working correctly. Make sure they are on Intel's list before you purchase. Maybe try a different brand like Kingston.

Do you have any older 4GB, 8GB 2400Mhz SoDIMMs you can try? Maybe try them one DIMM at a time? These seem to work more reliably in my system then the faster ones.

Good points and yes the memory is my biggest concern. I tried a pair of 16GB 2400 SODIMMs earlier for that reason and didn't see any change in behavior.

I know there's no guarantee in compatibility even though Crucial says so - but it does mean that Crucial will take them back if they prove to be the issue.

Problem is I don't have anything that exactly matches the compatibility list, and there are no 64GB options either...   ok just ordered a pair of the 16GB HyperX sticks on the list on Prime 1-day delivery. Fingers crossed.

MRoss5200
Valued Contributor I
1,309 Views
Solved Jump to solution
In response to JimBC

This NUC has a Clear CMOS jumper on the board. You jumper pins 1-2, power on for a few seconds then power off. Jumper back to pins 0-1 (jumper hangs off 1 pin only). Then power back on. This will erase time/date and some other settings and put the BIOS back to default settings. Might be worth a try since nothing else is working. Will not hurt the system other than having to reset some custom settings.

The CMOS jumper is to the left of the BIOS Recovery jumper. 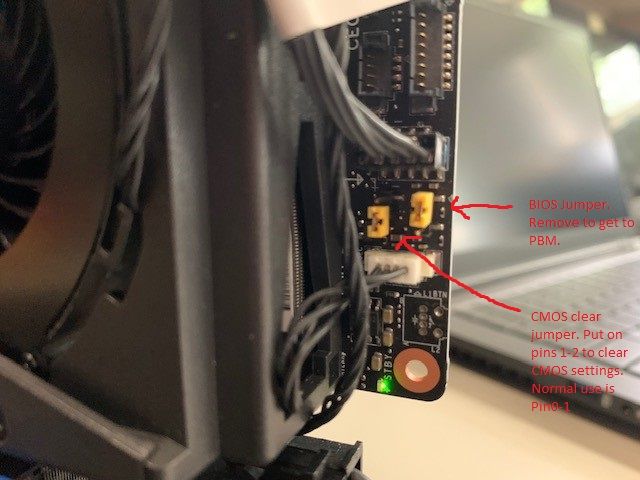 Thanks Mitch, that's good stuff to know. If only I had one to play with... (sigh! Mary's working on it (I hope))

How many other places has this CMOS Clear been implemented?

MRoss5200
Valued Contributor I
1,305 Views
Solved Jump to solution
In response to n_scott_pearson

Only on Quartz and Ghost so far.

Thanks again for the suggestions. I tried the CMOS reset and had no change in behavior.

I've also added the Kingston RAM on the Intel validated list: no change.

BIOS recovery by jumper: no change.

Never had a GPU in this - first boot was just with RAM + NVME.

Update: I opened a case with Intel and after unsuccessful troubleshooting was offered a refund as no replacement units were available.

Decided to return to the retailer instead and received a replacement today: it works without showing any of the symptoms I experienced first time around. Same RAM (the original 64GB kit)  and SSD.

Still no idea what the problem was, but none of the reset or recovery methods helped.