but as soon as I install it the system crashes and restarts. I have spent the last 2 weeks search for and installing drivers and doing clean re-installs of Windows. The device actually works because I ran 2 different distros of Linix and both found the network adaptor as soon as I plugged the cable in.

From what I have seen on the internet, I'm not the only person with this problem.

Before installing drivers using Intel DSA, you should download and install manually the Chipset Device Software. Reboot your NUC and only then use the IDSA.

Installed Chipset Device Software then installed the recommended driver. I tried to open Firefox and the system froze then re-booted.

I restored the system to a previous version and went through the procedure again BUT this time, using control panel/device manager, I uninstalled the device Other devices/network adapter before I installed the recommended driver. I then plugged in the cable and the adapter icon appeared in the tray. Unfortunately Windows was frozen and then it went into an endless loop of restart/preparing automatic repair/diagnosing you pc/cannot repair etc.

My next step is to do a clean Windows install (again) and before any updates or driver installs I'll install the Chipset Device Software. Then I'll let Windows do all of it's updates and then I'll install and run the Intel Driver Support software. I'll let you know the outcome.

If all that fails then I'll just use Wi-Fi and remain one very disappointed Intel customer whilst waiting for Microsoft and/or Intel to fix the obvious bug.

Since your issue is regarding our NUC11PABi5, we need to route this thread to the correct group so you will be better assisted by the proper team.

Please wait for their reply within 1 to 2 business days.

I'm experiencing something like this issue also. After installing the Intel® Ethernet (LAN) Network Connection Driver for Intel® NUC11PA (1.0.2.6 January 13, 2021, Size:1.55 MB), less than a minute later the system froze and rebooted.

After reboot the "Ethernet controller" appears in the device manager: 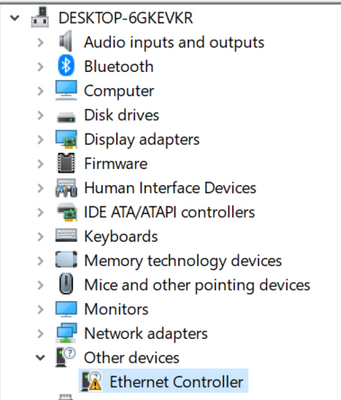 I also tried installing the Chipset Device Software and reinstalling the ethernet driver using the Driver & Support Assistant, but I can still reproduce the fault like I just described. Fortunately when I reboot the device usually reverts to "Ethernet controller" status, and so I can get into the device manager and uninstall the driver. At least this is a way to keep other things working while this issue is resolved.

That's exactly the problem. I have given up trying to fix it and, until either Intel or Microsoft (or both) fix the obvious bug, I remain a very unhappy Nuc owner. Sure, it works very well using wi-fi but that's not the issue.

1- Is this a new unit? Was it working properly before?

2- If this worked fine before, besides the driver update, was there any other hardware or software change (Windows, BIOS, or app updates) that may relate to the point when the issue started?

Hi Andrew and thank you for your reply,

The unit was purchased new on April 27 2021 from a reputable Sydney dealer.

When the system crashes it does one of 2 things...it goes straight to reboot with no messages. Mostly it looks as though it was just powered on. Or sometimes I get Windows message saying that says that Windows can't start and I have several options of which I normally choose Advanced/Start Windows anyway. Sometimes Windows does star but crashes within a minute, usually as soon as I click on something. Sometime on rebooting I see a message that says "diagnosing PC" then "repairing PC' then it crashes.

As previously stated, I have done several (more than 5) clean reinstalls of Windows. I've tried installing the Intel drivers AFTER Windows updates and Before Windows updates.

I have installed and ran Intel Chipset Driver Software and the the Driver Support Software. All to no avail. The Intel DSS is currently telling me that I have 3 updates available which are the network adaptor, Wi Fi and Thunderbolt. None of which I am going to run again.

My network adapter shows up the same as in Raven's screenshot. The only time I have had it appear as an Intel adapter was when I deleted (through device manager) that one showing and then installed the Intel driver but as soon as I plugged the cable in it crashed.

To check if the adapter was faulty or not, I ran 3 different distros of Linux and all 3 found it and It worked perfectly.

I have attached the SSU file and I hope that this gets it sorted. I don't care if I have to re-install Windows again or whatever. I just want what I paid for to work as it should.

I hate to say it, but I suggest you do another clean install. Use this process:

With this process, if you perform Step 6 and it causes hang or spontaneous reboot, then, because you know Windows Update can't have done something unexpected, you can more-confidently conclude that you are looking at a hardware issue.

I'll give a try tomorrow afternoon and let you know what happens. I'm about upgrade my main computer to this 11th Gen Rocket Lake: i5-11500 CPU. If I have this kind of problem with it I'll tear my hair out. Being a former multi-store Blockbuster Franchisee, I have had many computers over the years ( I always build them myself) and I have never had this kind of trouble before.

I followed your instructions to the letter, n_scott. The only problem was that when it was all finished I had no audio. What I had showing in device manager was other devices/intel high definition audio. No problem, I thought, I'll just download the Intel High Definition Audio Device driver. Not quite that simple! After a Google search I discovered (thank you to that person) that I needed to download Intel HD Graphics drivers. Who would have thought?

But all's well that ends well (so far).

Thank you for your help n_scott.

I must say though that this has been one of the worst new computer set-ups I have ever come across. As previously stated, I have built many computers over the years  and NEVER had this much trouble. This Saturday I'm buying the parts for a new PC build (based around a new i5 cpu) to upgrade my personal PC. I'll put it together, install Windows and that will probably be it. At worst I'll have to install some drivers from the CD that will come with the motherboard.

Thank you for your response and for all the details provided. We will be waiting for you to provide the outcome of the steps recommended by n_scott_pearson. By the way, thank you @n_scott_pearson for your support.

Should you have additional inquiries, please don't hesitate to contact us back.

I tried the suggestion from @n_scott_pearson but to no avail:

No joy for me:

After about 5 reinstalls of windows I start noticing some patterns and document the process from the 5th and 6th attempts:

1. Windows 10 install files on first partition with Chipset, ME and Lan drivers also on that partition.
2. Deleted other partitions and installed Win10 in free space. Ethernet was not connected. Continue install.
3. Had to tell windows 10 twice that I don't have a network. Finished windows setup with a Local account.
4. When first at windows desktop, copied Chipset, ME and LAN drivers to desktop and extracted.
5. Installed Chipset and ME drivers. Restarted. Confirmed that the Ethernet controller was not seen in the Device manager.
6. Installed lan driver and restarted. Confirmed that Intel(R) Ethernet Controller (3) I222-V was now seen in the device manager. Device active but ethernet still unplugged.
7. Left machine idle for a few minutes waiting for spontaneous restart which does not happen.
8. Pause Windows update before connecting ethernet. Confirm that no updates are being downloaded
9. Set system restore point.
10. Install driver and support assistant
11. IDSA tells me the ME driver for my NUC is available for download, so I go ahead and download and install. The ME install gives me the remove/repair options. So I abandon that and go to the next driver.
12. I install the Serial IO driver. Screen blacks out during install but recovers. I restart to finish driver installation.
13. Serial IO install seems to broken something, because after the restart I got a spontaneous restart almost immediately.
14. I restore to step 9. As I recover I open device manager and I can see the yellow warning signs disappearing. It looks like something is automatically installing drivers. After the graphics driver installs itself the system spontaneously reboots.
15. I go through steps 2-9 again, this time restart after the chipset driver is installed. Then I install the ME driver and restart. Install LAN driver and restart. Reconnect ethernet. Even though Windows update is disabled, a warning lights in the Other devices in the device manager disappears, and I wonder if it will continue. To kill time I download the drivers from intel manually. Sure enough, the "other devices" list gradually disappears over the course of 10-15 minutes. Eventually the system restarts (softly), completes driver installs to eliminate all "Other devices". Within a few minutes I see a notification that the "Graphics Command Centre" has been installed, and then I get the spontaneous hard restart. After Restart, "HD Audio" is in "Other devices" and then installs as "Realtek HD Audio". Then I get a bluescreen with the stop code. Then a spontaneous restarts, and this time I don't even get a login screen before the next spontaneous restart.

I thought I would give one more fresh install a go, and this time disable automatic driver installs (which actually doesn't seem to work in the latest build of windows). I'm at my wits end.

@AndrewG_Intel in response to your questions:

1- This is a new unit. Received from shop a day or two before my first point.

2- If this worked fine before, besides the driver update, was there any other hardware or software change (Windows, BIOS, or app updates) that may relate to the point when the issue started? I was able to get the system to work with the ethernet disabled, but now I am having no such luck after the last round of testing.

For me, following n_scott's advice to the letter was the thing to do.

Thank you for your response and for taking the time to share the feedback on how the issue was solved following the instructions provided by n_scott_pearson. Having said that, we will proceed to close this inquiry now. If you need any additional information, please submit a new question as this thread will no longer be monitored.

Thank you for your response. We understood that you tried the steps that worked for RayBlock but the issue persists.

Thank you for your understanding; hope to hear from you soon.

Please make sure to select your country or region and to contact us within your local business Support hours. Also, feel free to refer to this post once you contact Intel Customer Support.

After so much time wasted, updating the BIOS to version 40 TWICE has fixed it.

Update with F7 once, load default settings and save.

Run the update again with F7.

Had no issues after that, ran all Windows updates and even the Intel Updater.