Intel® NUCs
Support for Intel® NUC products
Announcements
The Intel sign-in experience is changing in February to support enhanced security controls. If you sign in, click here for more information.

Thunderblt 3 Device not detected on NUC7I5BNH

Recently picked up a used NUC7I5BNH to go with my existing NUC8I5BEH and I freshly loaded Windows 10 and everything is working except Thunderbolt 3.

I have a Razor External GPU that works fine on my NUC8 but does not seem to be working on the NUC7.  When I plug in the Thunderbolt cable the Razor fires up and the card inside lights up and the fans run but it is not being detected by Windows.

I have Thunderbolt driver 1.41.790 (no longer available) on my NUC 8 which was replaced by 1.41.1051 which would not even install on the NUC7.  As of today the 1.41.1054 has been released and it does install along with the Thunderbolt software but the Razor is still not being detected.

One time after trying to install 1.41.1051 manually (before 1054) the Razor did show up in the Thunderbolt software and I did authorize it but upon rebooting it went away and now it is not listed anymore.

I am unclear what the issue is as the Razor seems to work on the other NUC with the same Thunderbolt cable.  So either the current driver and software (which is NOT on the other NUC) still has issues or there is something wrong with Thunderbolt on my NUC7.

Is there any chance I could get a copy of the Thunderbolt driver that predates 1.41.1951 as that one seems to work on my NUC8?

Any suggestions on what else I can try?

I do not has any other Thunderbolt 3 devices to test with but since the Razor works on the NUC8 I do not see why it would not work on the NUC 7.

JCahow, Thank you for posting in the Intel® Communities Support.

According to the SSU report, the BIOS version currently installed is the latest one 0083, and as you mentioned, the latest Intel® Thunderbolt driver version 1.41.1054.0 is already installed as well, so please make sure that the Thunderbolt Controller is enabled in the BIOS and please install the Thunderbolt™ 3 Controller Firmware Update Tool version 33, once you get the chance, please let us know the results:

Any questions please let me know.

I should have mentioned:

1) The Thunderbolt controller is turned on in the BIOS.

2) The hunderbolt firmware Update would not run, it gives the following error when executed

I do not see any Thunderbolt named Services running on my machine at the moment.

I have verified again that the Thunderbolt eGpu that I am trying to use works just fine my other NUC (NUC8I5BEH) with the same Thunderbolt cable.

I  was able for second time to see the eGPU in the Thunderbolt Control Center and I verified it again but as soon as I restarted the NUC it went away again and is now not listed.

The eGPU showed up again in the Thunderbolt Control Software.

I set it to "always connect" and this time before I rebooted I checked a few things.

The second Display adapter was now listed in Device Manager.  This allowed my to download and install Nvidia's latest drivers for the Geforce 750 Ti in the eGPU.

The "Thunderbolt(TM) Peer to Peer Shortcut" Service was now running

I shut down the NUC and switched the HDMI cable tot he eGPU and started the NUC. It took awhile (BIOS still defaults to Intel Graphics first) but the eGPU finally came up to my desktop and everything looked good.

I immediately noticed a problem as any application I try to run started and showed on the taskbar but there was no application window on the desktop.  I opened three things (Device Manage, Firefox, Display Settings) and saw nothing on my desktop screen but the base desktop.  If I put the mouse on them in the taskbar I could see the window was open but just not viewable.  I tried using the taskbar to Cascade, Stack, Side by Side the windows and nothing would show.  I could see the Notification Center and the Start Menu.

So for some reason the Thunderbolt eGPU is hardly ever found and even when it was it was not working right in Windows as my appications were not showing their windows.

The NUC8I5BEH that does work has the same NVidia driver as the one I just installed on the NUC7I5BNH.

Seems like a BIOS or Firmware issue is keeping the eGPU from consistently being detected at boot time and even when it does get detected it is not working correctly.

I should have noted that even when the Thunderbolt Peer to Peer Shortcut Service was running the Firmware Update failed again with the same error .

JCahow, Thank you very much for providing that information.

The Error: 0x208 SDK_SERVICE_NOT_FOUND Thunderbolt(TM) service doesn't exist is documented here: https://www.intel.com/content/www/us/en/support/articles/000026171/intel-nuc/intel-nuc-kits.html and it may be a driver related issue.

We have updated the driver structure that we had on DC and we added an .exe file for installation convenience.

Uncompress the file contents to a folder and run the Thunderbolt(TM) Software Installater.exe

Once the driver is loaded, can you please the TB FW update again?

Here is a quick reference to previous and actual TB driver: 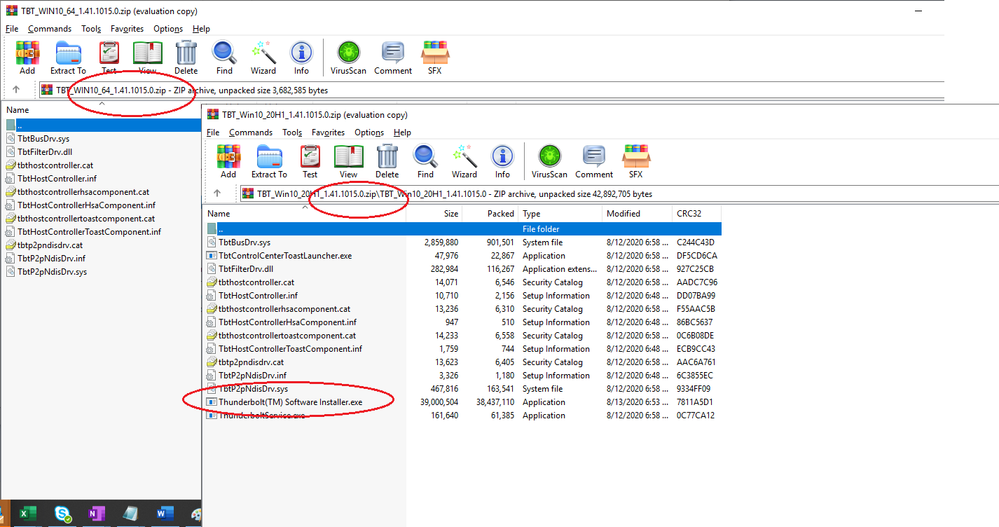 I downloaded the new Thunderbolt driver and tried to install it but it gave me an error and said I must remove the prior version first (which you did not mention).

After removing the prior version of the Thunderbolt driver the new one installed just fine.

I then tried to run the Thunderbolt firmware update and the update is failing with the exact same error as before (Thunderbolt eGPU is still attached during attempt).

I downloaded the firmware update again (just in case it had changed or was bad) and it still failed with the exact same Service error (Thunderbolt eGPU is still attached during attempt)..

The Thunderbolt Control Center is still not showing any attached devices (the Graphics card fan is running in the eGPU but nothing is listed in Device Manager).

I apologize for all the trouble caused trying to get the Thunderbolt to work.

I have one last recommendation:

If you still have issues after trying these steps, please reach out directly to our Intel Technical Support Service, here is our contact information: https://www.intel.com/content/www/us/en/support/contact-support.html#@7 and make reference to case number 04912506.

4) Ran linked 1054 Driver (this is different then the last one you wanted me to install) and it failed with this message:

"one or more issues caused the setup to fail.  Please fix the issues and then retry setup.  For more information see the log file."

I did not try reinstalling the Thunderbolt Control Center or the Firmware Update as the driver installation failed.

I am really sorry to hear that after all your efforts in troubleshooting this configuration the Thunderbolt Controller is still not working.
Unfortunately, I am running out of ideas, and at this point, I would recommend replacing the unit, however you mentioned at the very beginning of the post that you picked up the unit "used" and we don't provide warranty replacement for secondhand products so I would say that contacting the place of purchase may be necessary.

If warranty replacement is not an option, my last recommendation would be a fresh install of the Operating System with the intent to avoid possible driver conflicts.

Hello JCahow, I just wanted to check if the information posted previously was useful for you and if you need further assistance on this matter?

Hello JCahow, Since I have not heard back from you, we are closing the case, but if you have any additional questions, please post them on a new thread so we can further assist you with this matter.