Why is version 20.2.2 listed as the latest version of AMD drivers for AMD Radeon RX Vega M GH/GL?

Why is version 20.2.2 listed as the latest version of AMD drivers for AMD Radeon RX Vega M GH/GL: https://downloadcenter.intel.com/download/28600/Radeon-RX-Vega-M-Graphics-Driver-for-Windows-10-64-b...

I quite calmly installed version 20.4.1 on my Intel NUC Hades Canyon (NUC8i7HVK): https://www.amd.com/en/support/kb/release-notes/rn-rad-win-20-4-1

Please try it yourself and update the information on this page: https://downloadcenter.intel.com/download/28600/Radeon-RX-Vega-M-Graphics-Driver-for-Windows-10-64-b...

1. This issue was discussed in this Community before. It was also commented by Intel representative.

2. FYI, some users (included me) got problems with the version 20.2.2.  I'm using version 19.12.1 as the latest version working good for me on Hades Canyon. Please read this thread to more explanation.

3. This is another thread on similar subject.

4. Hope, this answers your question.

I don't see anywhere that 20.2.2 is WHQL. Besides, version 20.4.1 works without any complaints. Considering that AMD Radeon RX Vega M GH / GL will no longer receive new driver updates, I think it's best to link to the most recent version.

You may want  to look closer.  However, whichever you use is up to you. 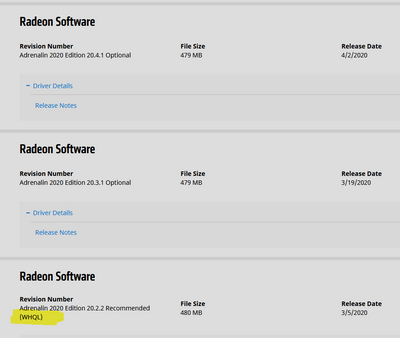 Okay, now I want to hear the Intel representative's opinion on this.

Very funny ... I want to hear from an Intel representative on the revision of the latest version available for AMD Radeon RX Vega M GH / GL.

The Intel link is from June.

There is nothing funny here.  As I previously said, you can use any driver your heart desires.

I would also like to have a driver update for my Hades Canyon, as well as a lot of other users who invested in this product, and have this issue be solved.  Sorry, but I would not be allowed to say what I want regarding this issue,  which I am certain Intel and AMD would not like.

If you want an Intel rep to respond, do not worry - they will.  But the WHQL recommendation is because it passed a series of tests, where 20.4.1 either did not, or was not submitted for testing.  Intel will recommend the latest that passes the WHQL testing, used in conjunction with the latest Intel DCH driver.

I am not sure what your point is to debating these two drivers.  You will also find another user on this forum who recommends 19.12.1 because of the video recording ability, which is broken in later drivers.  I think, rather than debating which obsolete driver to use, you should be encouraging Intel and AMD to resolve this driver issue, and have AMD fix the outstanding bugs.  Let's face it - AMD support is deplorable, and that is where the arrows should be pointed.

Just an opinion from a NUC enthusiast.  I am not an employee or contractor for Intel.

Yes, it sucks that AMD stopped supporting its own graphics card. I would like to hear from an Intel employee why support for the AMD Radeon RX Vega M GH / GL graphics card is discontinued. It has only been about two years since the Intel NUC Hades Canyon entered the market. This is just a slap in the face to everyone who spent a lot of money to buy this nettop.

1. This issue was discussed in this Community before. It was also commented by Intel representative.

2. FYI, some users (included me) got problems with the version 20.2.2.  I'm using version 19.12.1 as the latest version working good for me on Hades Canyon. Please read this thread to more explanation.

3. This is another thread on similar subject.

4. Hope, this answers your question.

You keep bringing up 20.4.1 here and in other threads, but 20.4.2 is actually listed as WHQL on the AMD website when you drill down for RX Vega 64 drivers:

VCoba, Thank you for posting in the Intel® Communities Support.

I just wanted to let you know that the information provided by Al Hill and LEON WAKSMAN is correct.

The proper drivers for the Intel® NUC Kit NUC8i7HVK that were tested and validated by Intel® are available in the Intel® Download Center:

Keep in mind that AMD drivers are generic drivers, those drivers were released to be installed on different platforms that contain their processors, they have the liberty to offer different driver versions but the manufacturer of the computer is the one that customized, test and validate the drivers provided by them.

AMD and Intel both seem to be taking how much people spent on these devices pretty lightly especially seeing what was originally promised.

This is what you get for support when it comes to devices that not many people bought I guess. If everyone that got shafted boycotted, it would be 100% inconsequential.

I would be astonished if there is actually any real incompatibility with AMD's drivers and RX Vega M GH/GL since other Vega devices are fully supported. In the past I have tested pretend VS. real incompatibility by disabling driver signing checking and modifying .inf files. I took and a quick look and it should be easy enough to move a few lines from the last supported drivers to the latest drivers. Modifying drivers to use 9X0 Nvidia cards on XP was another good example of exposing pretend incompatibility.

It is pretty astonishing that you can drop more than $1000 on a device and within a few years need to hack your OS and drivers just to use it.