I have tried to upgrade my Intel NUC Hades Canyon NUC8i7HVB from 1909 to 2004 several times, but it always does a rollback at around 70% completion at the second (final?) stage.

The upgrade error log shows at the end only an error during a metrics file merge?!

First attempt was mid of August with subsequent attempts in September.
Windows 10 (Professional) was offering the feature upgrade and found no upgrade issues.
The installation ist just about one year fresh.

I also created a upgrade media for Windows 10 2004 in September and used this upgrade method.

I spend multiple hours to find any hints and tried to follow every hint.

1.) BIOS and driver are at the latest version as of 11.10.2020 and each attempt was done with latest Intel/AMD driver

2.) All Antivirus apps are deinstalled

3.) Windows and disk-checks done without any errors or malware found.

A fresh install would be an extreme effort I'm trying to avoid, as I have a lot of development env. for microcontroller development configured + other smaller but high effort to get to the current state settings. Windows is certainly installed in 15mins, but then ... many days effort.

I hope somebody has a hint or Intel/Microsoft find the root course of the upgrade problem.
It seem that there is something wrong as the further offer for an upgrade is now no longer offered and it says it's in preparation. I'm wondering if anybody got the upgrade on this NUC8i7HVB from 1909 to 2004 done?

1. I have and other users have upgraded Hades Canyon to version 2004. I have no observed any problems doing this.

2. I propose that you try to repair your Windows and upgrade to version 2004, doing an in Place Upgrade. This procedure will not affect your installed programs or your data. After logging in as an Administrator, start in Step 6 using Microsoft Media Creation Tool.

Thanks for your hints, but that I tried already to do an In-Place upgrade with a media I created with the media creation tool (Windows 10 2004). It's actually a standard Windows 10 upgrade keeping all files and applications. I did that all the time on all PC's since years. It not a big difference to the Windows 10 inplace upgrade using the Windows Update assistent, just with an USB stick.

It works till around 70% (after a first reboot, driver/device setup) and at 70%, it reboots again and then it does a restore/rollback to the previous Windows 10 1909.

Before, I did a disk check, windows verification with sfc /scannow etc. No errors found.

Do you have some third party antivirus installed? If yes please disable it for the update time.

Check out this article: Windows 10 upgrades blocked after installing KB4577062

This link does not help, as it just describes what could block Windows 10 2004 from starting the upgrade.
In my case, everything is perfect, all checks are fine and Windows 10 2004 upgrade starts till almost the end and after 70% in the finalization phase, it does a reboot und deainstall/rolls back to 1909.

In the latter stages of the installation process (which could mean this 70% point), updates are going to be applied. This makes the issue raised in the article that I linked appropriate. It is NOT a blocking issue; it is a completion issue. Try applying the MS fix that they mentioned:  https://techcommunity.microsoft.com/t5/windows-it-pro-blog/the-benefits-of-windows-10-dynamic-update....

today I did another attempt, as on my NUC, MS took the 2004 upgrade away (I was assuming they recognized, that there is still a problem) and telling suddenly, that 2004 is not ready for my PC but will offered once it is available (compatible again).
Today it was offered again (as in the beginning), so I thought they might have found/fixed the problem, but after 75% in the final phase (after one hour applying the updates), it rebooted again and tried th recover the installation, followed by another reboot which does the rollback.

So now to your link and the fix you're refering:

Is it that part you mean, to disable dynamic update during installation by providng/a setupconfig.ini?
The only option I have had is to disable Dynamic Updates on the workstation itself before running the upgrade by creating a Setupconfig.ini file (documented here: https://www.asquaredozen.com/2019/08/25/windows-10-feature-updates-using-setupconfig-ini-to-manage-f...)...

Another option would be to wait for the next update 2009 and hope, that the problem was fixed there (not sure if it would help, as it's a minor upgrade to 2004).

I have all current/recent Intel driver/bios installed

this is wat the setuperr.log says:

The log is telling me that one installer (invoked by SetupPlatform), did not release the Setup Mutex (which likely meant it hung and didn't exit) and this caused the next installer in the chain to fail. Could it be an Intel installer? Can't tell...

do you have any idea how to find out what is blocking the mutex, which driver (if it is a driver/driver install) causing that conflict and rollback and what I could do to overcome that problem? Not sure what on this Intel NUC I can switch off in BIOS or ... to prevent such installation during the upgrade. I have all most recent drivers already installed.

What I want to avoid is to do a complete fresh Windows install (that would cause me weeks to get to status quo back).

Just curious - what devices do you have plugged in to your NUC?  Have you tried the upgrade with everything unplugged except a wired mouse and keyboard?

I have unplugged everything beside mouse, keyboard and monitor. That I know since long time, that during install/upgrade, everything has to be unplugged (that is a well known hint).

Did you ever have any device plugged in that would not work or install correctly?

1. What is the version of the currently installed Intel Graphics Driver?

2. Did you ever installed Intel Chipset Software and Management Engine Driver?

I have installed the latest driver for all devices from the Intel driver page for the NUC Hades Canyon.

I'm doing regular updates and manuel verification on most recent drivers before I do an upgrade, as this is always mentioned.

I also have the Intel driver update assisent installed which informs always when a new driver is available.

I have also checked for the latest Chipset driver and yes this is one of the first driver I always install.

Here are the versions: 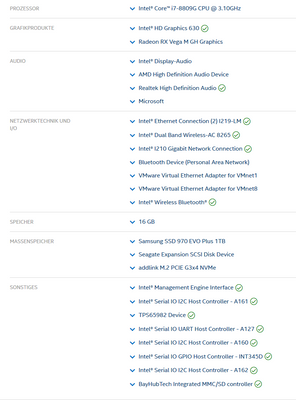 What version of the NVIDIA driver?

1. Scott probably meant to ask what is the version of the AMD driver?

2. I've compared the IDSA picture of your NUC to the same picture from my NUC (see the attached image). The difference what I find is that you have VMware Virtual Machine software installed and Seagate Expansion SCSI Disk Device (is the and external storage?). 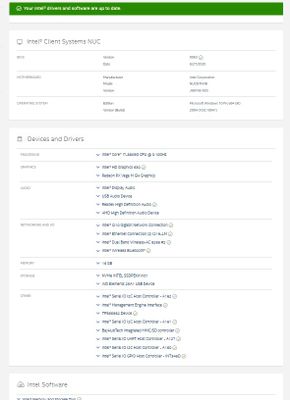 Right, my other left.

and the Seagate is just the currrent connect Seagate external USB 3.0 disk.

Yea, I was more curious than thinking there was a correlation.

I have worked with a four or five different HV units now (including one built from parts scavenged from other dead units) and have not had *any* issues updating them from 1909 to 2004.