Nios® II Embedded Design Suite (EDS)
Support for Embedded Development Tools, Processors (SoCs and Nios® II processor), Embedded Development Suites (EDSs), Boot and Configuration, Operating Systems, C and C++
Announcements
Intel Support hours are Monday-Fridays, 8am-5pm PST, except Holidays. Thanks to our community members who provide support during our down time or before we get to your questions. We appreciate you!

Issue with Nios II Eclipse Tools with Quartus 18.x and 20.x on Linux. Quartus 18.x and 20.x both work perfectly fine on the Linux platform, but the issue arises when we start using Eclipse for Nios II software development. The problem I am encountering is that Eclipse is not able to read/parse the .sopc file that is created by Quartus. In Eclipse and only in these versions and only on Linux does this issue arise, Windows does not have this issue. In Quartus 16.x Eclipse reads the .sopc no problem on Linux and everything works as expected.
The issue and question is why does Quartus 18.x and 20.x Nios II Eclipse Tools have issues on Linux? Why does Eclipse have issues loading the .sopc file in both wizards of creating a templete design and creating a bsp, I can create the app no problem for Nios II but get stuck on creating the BSP, where upon loading .sopc I get stuck in an infinite loop. This only happens on Linux, I cannot recreate these issues in Windows.

Can you refer to page 27 below for Linux installation:

I am very interested to hear if the installation details in Linux described in page 27 do solve the problem. I have actually been having problems in Windows with Quartus 20.1 and am in the process to install on Linux to avoid the use of WSL. 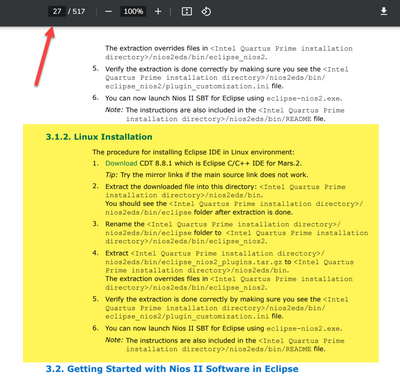 I am not using Linux directly at the moment. However, I do have one question.

On Windows, Intel recommends Ubuntu 18.04 WSL install. However, Ubuntu native 18.04 (or later) is not directly endorsed for Eclipse IDE. How can this be? How can Ubuntu be supported on WSL but not natively? Thanks. James

You can refer to point 4 below:

There is the issue  that although the content link you provide shows limited Linux support for "supported OS" there is the general description of installation on Linux in the Nios II handbook as shown below . . .

That is taken from page 27. It says Linux, not just SUSE Linux. 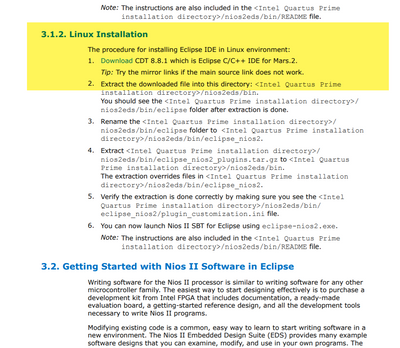 You are right. For Nios II EDS, the native Linux supported depends on the Quartus version.

You have to always check from below link before download.

Thanks for the feedback here.

However, it stills appears to me that there is difference between the website you reference

and the Nios II Handbook which gives instructions for Linux on page 27 of the handbook. On that pages, it appears any Linux is suitable.

I would have to think that running on Ubuntu would be feasible given that it Eclipse runs on WSL Ubuntu 18.04 on Windows.

I just haven't tried this out yet.

The Nios II handbook page 27 is a general guide, regarding the OS supported, you have to refer to the previous link I provided.