Round about a year ago, my computer started to perma hang/freeze while my ASUS cpu monitor was throwing temp alerts.  I was using and H115i AIO that was less than a year old at that point mounted above the pump/hoses at the top of the case.  I took out the AIO and made sure the RAD was perfectly clear, and it was. I removed and reapplied TIM and reseated the pump head.  No change in the temp readings, warnings, or hangs.  I checked the mount around the CPU for damage or warping and found none.  Pump block of AIO is seated perfectly on the CPU.  I tried applying TIM in the size of a BB all the way up to the size of a little more than a pea.  None of it made any difference.  I went out and got a new H115i and went through the same spiel, and still, same results.  I decided to keep the new H115i AIO just in case.  I uninstalled Corsair Link and ASUS CPU monitor and the hangs seemed to subside (for the most part).

2 days ago, my PC started to hang / freeze again.  When I reset my PC, POST would halt for CPU over temp warning of 80 deg C.  PC wouldn't boot in that state.  Again, I went through my PC, it was **bleep** near spotless with really good airflow.  I re-cleaned / sprayed-clear my AIO RAD and reseated it again with no change.

I went into the BIOS and turned off temp warnings which allowed me to boot into windows 10.

I ran Open HW Monitor and captured this screenshot at idle sitting in windows. 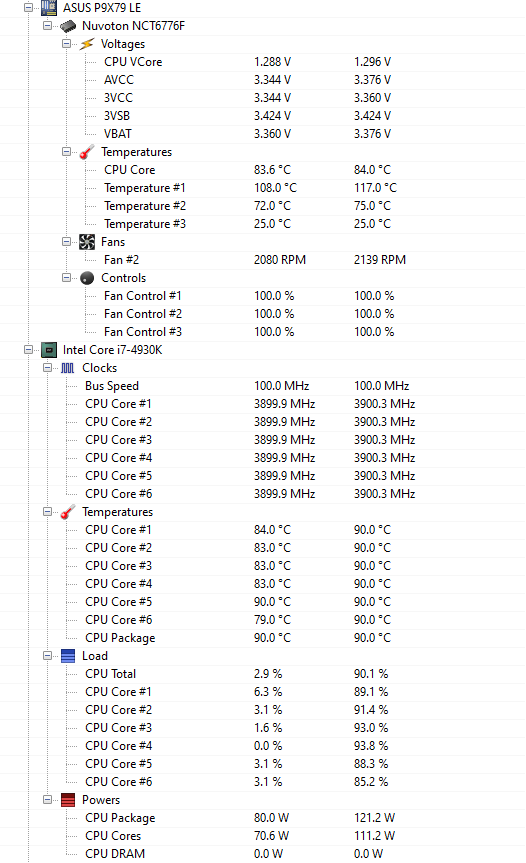 Is my processor toast?

I know the CPU is 8 years old now, but I've only ever seen CPU's die.  I've never seen temp issues like this.

To better assist you I would appreciate if you could provide the following information:

To gather more information about your system please provide the following:

Please run the following tool and attach the reports generated.

1. Open the application and click on "Scan" to see the system and device information.

2. By default, Intel® SSU will take you to the "Summary View".

3.Click on the menu where it says "Summary" to change to "Detailed View".

To save the report, once the test is done, click on "File >> View Results File" and attach the .txt file to your reply.

Thank you so much for the information provided.

After reviewing the report attached the BIOS version of your motherboard caught my attention.

I can see that the BIOS is dated for year 2013 so there might be a newer BIOS available for your motherboard.

Keeping your system up to date in terms of BIOS/Firmware may improve the system performance and stability.

I would strongly recommend contacting your motherboard manufacturer for guidance on this process and update your BIOS to the latest version.

You can find the latest BIOS for your motherboard here.

There you can find really useful recommendations to avoid overheating and troubleshooting tips.

If you notice any improvement in your system performance after the update of the BIOS please let me know.

Links to third-party sites and references to third-party trademarks are provided for convenience and illustrative purposes only. Unless explicitly stated, Intel® is not responsible for the contents of such links, and no third-party endorsement of Intel or any of its products is implied.

Were you able to update the BIOS?

Let me know the outcome and if you need more assistance.