I am attempting to improve the security posture of a specialty computer system.

According to the Linux tools, the processor in my system is

which is reported as

is this processor actually vulnerable as reported by the software checker "Spectre and Meltdown mitigation detection tool v0.43"? If so, is there an MCU to address it?

I've filed an issue at GitHub against the software checker, but I haven't seen an update so I'm hoping there is someone here who can help. There are further details at the link.

If necessary, I could boot to an alternative OS to try to determine this answer, but I'm not sure if that would be effective.

I've also tried reaching out to the system integrator, but I have not received a response.

I read through this post which linked to information about L1TF side channel attacks, and RSRE a.k.a "GPZ Variant 3a" and I have also read Ubuntu's L1TF page, which does not mention CVE-2018-3640. The Ubuntu Security Notice (USN-3756-1) page does not go forward to reference the version of the "intel microcode" package that I am running, or the Linux kernel version, or the Ubuntu distribution release.  I suppose this is not surprising, since it is now 2021 and not 2018.

Thank you for any suggestion.

I have reviewed the November 2018 MCU guidance which shows on page 6 that the microcode running on this processor is "green", since it is later than version 410. So I'm trying to determine if the checker is correct that this processor running this microcode is vulnerable to RSRR v3a or if it is incorrect.

Here is how I discovered that the processor has microcode updated to revision 0x411: 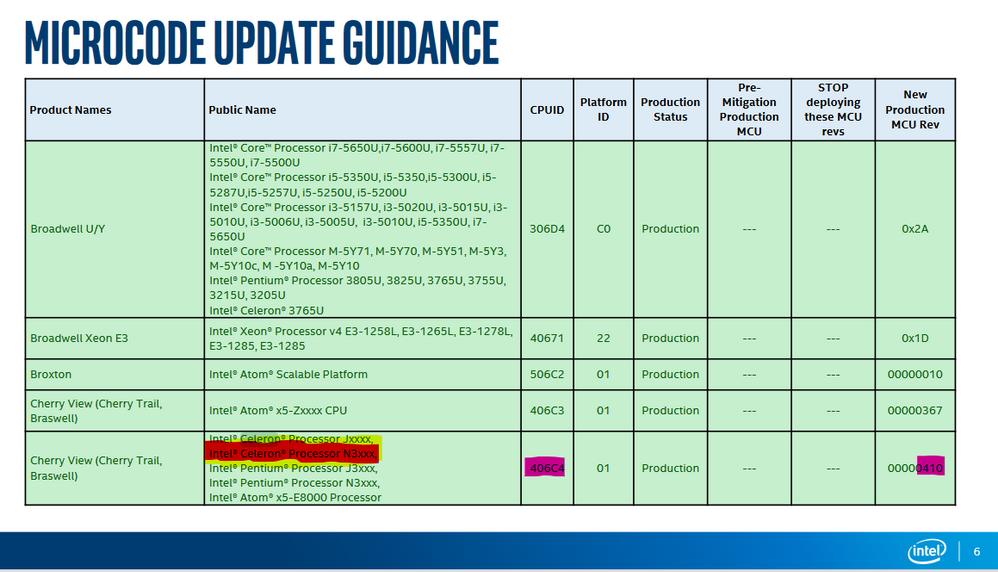 The official information about this topic is directly related to SA-00088:

You can find the "Affected products" section there, the Celeron N3160 is not listed nor any Braswell processors, so this processor is not affected by the Spectre and Meltdown.

If you are concerned about these alerts, we recommend keeping the BIOS up to date because the microcode is included in that firmware; however, it would be good to check with Linux or the app's developer where those alerts are coming from and see what exactly they mean.