Inefficiencies with higher thread counts of tbb:parallel_reduce and my own implementation of it

So I am trying to run a parallel sum over a rather large array of uint8_t's (big like 50 GB although this holds true at both higher and lower sizes aswell). I am trying to measure the performance of a handwritten parallel sum vs TBB's parallel reduce and their scalability when adding more threads. I did this by measuring the "speedup factor" (the time to reduce on n threads / time to reduce on 1 thread) of each reduce at each thread count. Theoretically, this value should be n if a reduce since parallel reduce is very parallel. So I have plotted the number of threads vs made available to the reduce vs the "speedup factor" of each reduce. Theoretically, if we scale perfectly we would expect this to be exactly 1:1, however it is not. It looks like this: 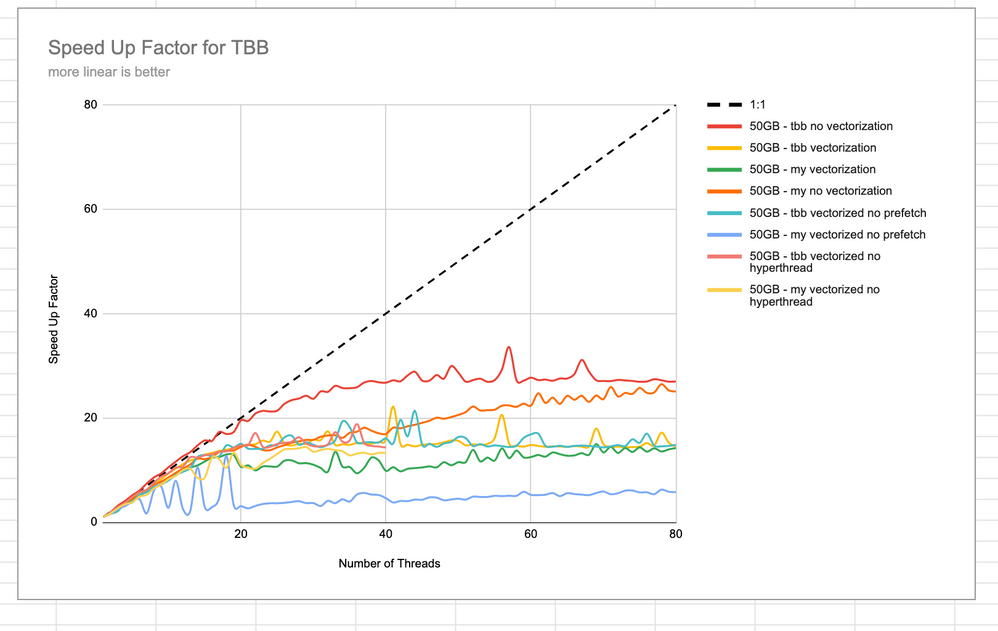 This seems to imply that there is some sort of bottleneck at higher core counts. It is also maybe worth noting that my implementation has very similar performance to tbb's in terms of raw performance and not just in speedup factor. I was suspicious that maybe some hyperthreading effect or prefetching effect or vectorization effect might be "roiding up" the single threading performance of both implementations, artificially making the curves look less linear. So I toggled turning those on and off and while it did make a little bit of a difference in the raw performance for the most part it didn't affect the speedup curves much. Which is suspicious. I also tried to check in Vtune to see what might be the bottleneck and this didn't turn up anything :(. This makes me think that there is some sort of bottleneck that is occurring in the hardware since both our implementations are achieving the same shaped curves? Are there any ideas?

Thank you for posting your question on this Intel® Community.

We understand that you are running some tests with handwritten parallel sum vs. TBB's (Intel® Threading Building Blocks) parallel reduce and scalability.

Since your tests are related to Intel® Threading Building Blocks, we would like to know if you are a Software developer. Could you please provide more details about this?

Are you currently writing an application and using a specific OS version?

I am currently a student researcher at CMU (idk if that counts as a software developer) and yes I am currently writing an application for primarily Ubuntu but it also needs to work on Mac for development purposes.

Please allow us to review this information.

We will update this thread soon.

Thank you for waiting.

Here he can verify the steps to open a web portal ticket:

I would like to know if you have been able to follow the steps to create a web ticket for your question.

Yes, thanks. I submitted a ticket

Thank you for confirming that you have followed the steps to open the case.