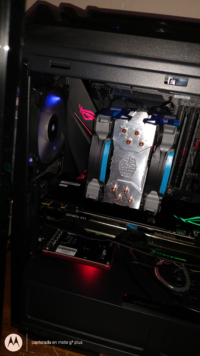 I had to turn off the Turbo Mode because the heat ends up crashing. I have the processor running at 3.2Ghz constantly. The processor exceeds 85 ° C. What solution can you offer me for this problem? I went to the business where I bought it and changed it, but the seller told me that it is normal, he told me that from skylake that problem is persistent in some shipments.

I have heard quite a lot about this problem, so basically it could be normal, for this configuration, but it is not a good thing, you should contact a good hardware engineer to get a proper solution for this processor.

Well, in this case could you give me a contact with an intel engineer to solve this problem?

Amy_C_Intel1
Employee
256 Views
Based on your description, your processor is working under the specification. The max temperature for this model is 100°C. You can check this here: https://ark.intel.com/products/126686/Intel-Core-i7-8700-Processor-12M-Cache-up-to-4-60-GHz- You can always run the https://downloadcenter.intel.com/download/19792/Intel-Processor-Diagnostic-Tool to check the functionality of your processor. Amy C Intel Customer Support Technician Under Contract to Intel Corporation
0 Kudos
Copy link
Share
Reply

The IPDT processor test raises a lot of temperature and generates throttling, even though it works, but it's not the solution.

Let's see if I understand well. According to you, as long as it does not reach 100 degrees, nothing bad happens?

The processor falls in Throttling as soon as it touches the 85 degrees, it lowers the speed and as the only solution I have to make an underclock to keep it. However I could not leave it that way, so I had to remove the turbo mode, now my 8700 works with the 3.2Ghz clock instead of using the 4.3 I used. The video editing has lowered rendering quality. It does not have logic what you say.

I have used intel for a long time, it has given me great satisfactions. But I'm afraid that this time I must accept that AMD has won. The truth was that after the 6700k there would be an improvement, but no. The watch is limited to 2666mhz in memory, the processor is normal to rise so much of temperature until it reaches 100 ° C is normal for you. It gives me anguish to know that they no longer listen to the users they are only adding improvements with each exit of the processor until the Tiger Lake. From now on I will switch to AMD, I think it has more future than Intel, and obviously I will recommend my friends and acquaintances to move to AMD, because apparently you will continue to make processors that do not comply with the wishes we expect.

Thanks anyway for the help, but it's not enough just to say read the QVL or the Specs of the intel ARK.