I just ran my first test using the Intel XTU software and I assume "The CPU Current Throttled" message I am seeing is in relation to what my motherboard is able to handle for the CPU?   It's paired mostly with "The CPU ExternalVR Throttled".  I'm hoping someone can provide a little more details as to what these would be in relation to. 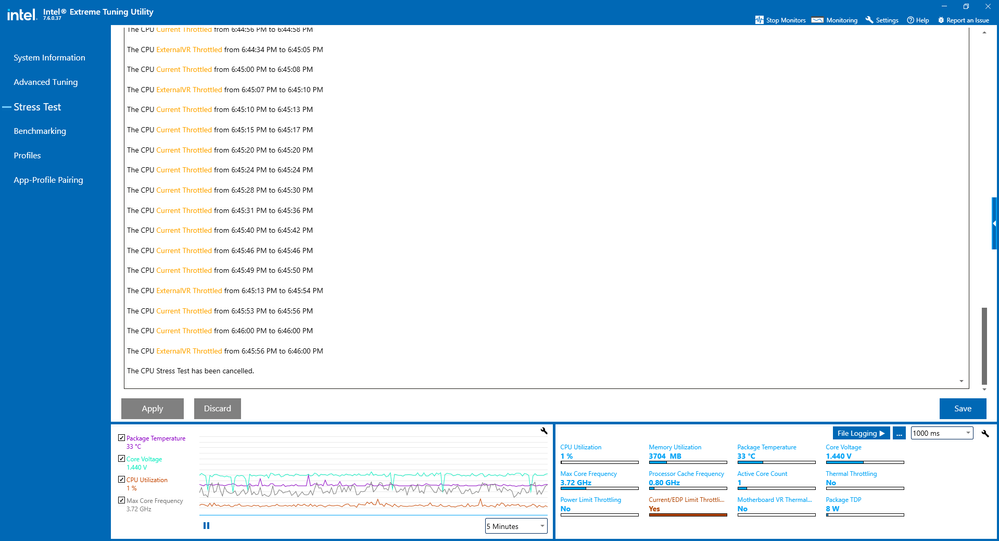 So the Intel support engineers can have more information about your system, Please download and run the Intel System Support Utility (https://downloadcenter.intel.com/download/25293/Intel-System-Support-Utility-for-Windows- ) for Windows. Select all data categories and then have it generate a report. Next, have the tool Save the report to a text file (don't try to use the Submit capability; it doesn't work). Finally, using the Drag and drop here or browse files to attach dialog below the edit box for the body of your response post, upload and attach this file to the response post.

See the attached for more details on the system.  I am running these tests mainly because I am seeing stuttering from my GPU and I think the motherboard is not capable of handling the requirements for the CPU and GPU on the intensive games I play.  I've already done so much to try to figure this out and checked temps, etc, and all seem to be within reason.  Reset Windows, tested overclocking, turned it off, updated motherboard BIOS with no success in resolving the issue.  I've added other things to show the problem experienced. 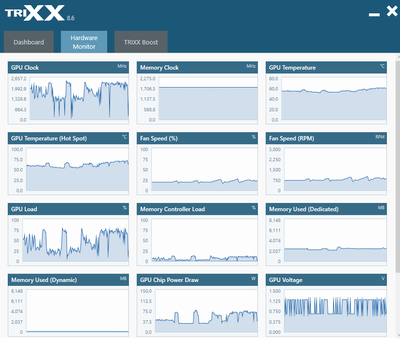 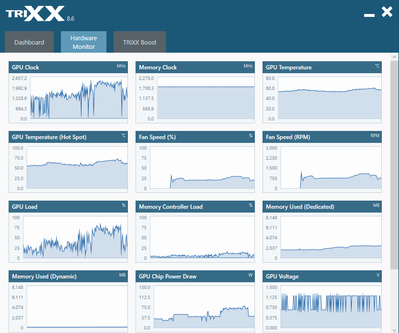 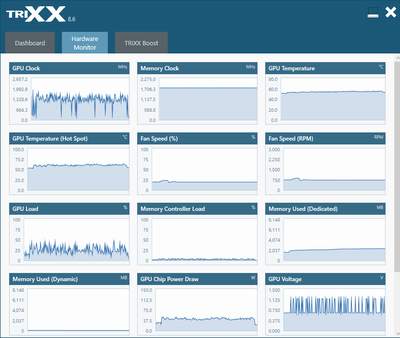 I personally believe this is actually an issue with the motherboard as it is an entry level ASRock motherboard (H310CM-HDV).  I spoke with AMD and they suggested I perform some actions which I had, with no change.  The main concern here is not necessarily the CPU or the GPU as I don't believe they're the problem.  When I run Destiny 2 and Streamlabs OBS, the CPU and GPU both run at around 60% utilization.  RAM is up to about 3500 MB out of 16 GB total.

I have added videos as well from my google drive showing the drops occurring when playing Destiny 2.

Thank you for the information provided, please download and run our Intel® Processor Diagnostic Tool, this will run a series of tests to check if the processor is working as expected. Please attach a screenshot of the results to your response.

Also, please let me know if you have already checked the issue with the motherboard manufacturer.

Here is the result of the test Josue.

Thank you for the information provided, as per the test results, it seems the processor is working fine with no issues. Please let me know if you reached the motherboard manufacturer. Also, is it possible to test the processor in another system?

I think the rate it was set at is a moot point because it has been reverted back to its default settings.  I don't plan on setting the CPU to an overclocked state as I don't find there to be a need to generate any further stress on it.  At $300+, I am not interested in stressing the CPU any further than what it is under normal load with streaming and gaming.

Current Throttling is most-definitely a motherboard (BIOS implementation) issue. It has nothing to do with the processor (well, other than the processor is contributing to overall power consumption). If this is a desktop motherboard, the BIOS should provide configuration parameters for the control of this throttling. If it does not, well, it's entry-level junk AFAIAC.

As I mentioned I did change some settings in the BIOS for overclocking the CPU but I changed it back to the default BIOS profile. I did not try the integrated while gaming since I that was not something AMD recommended. I bought a new motherboard and put that in but it didn't work. I won't have a new motherboard until tomorrow. The power supply works just fine.
In response to JosueO_Intel
0 Kudos
Copy link
Share
Reply

Thank you for the information provided, we will wait for you to get the new motherboard and test it. Let us know the results.

Also, it is important for you to know that using the processor outside of specifications can permanently damage the component, causing the system to not work as it was before the changes. In case you remember which settings you change or the frequency you were using please let us know since it could be helpful to try to determine if the processor was damaged during the time it was running different parameters than the stock ones.

It would appear that any issue that was present against the CPU appears to be cleared up.  It was not an issue with the motherboard at all, rather the power supply on my system was going bad.  It for some reason was failing to provide adequate power to my CPU and other components.  I swapped out my EVGA - W1 Series 600W ATX 12V/EPS 12V 80 Plus Power Supply for a CORSAIR - RM Series RM750 PSU.  Things are running smooth and with the IXT software suggested to run, I only saw one thing in a 3 minute period on the CPU rather than hundreds of 'The CPU Current Throttled".  I believe there may be some minor damage to my GPU but I will be working that out with the seller of the GPU to see if I can get this replaced and verified it is resolved.  This issue can be marked as closed.

I am glad to hear that the issue is now solved and everything is working fine.