I did some stress tests with LinpackWtreme with 2 and 3 cores.

I don't know what is going on but something strange happens.

Here are the ss I made: 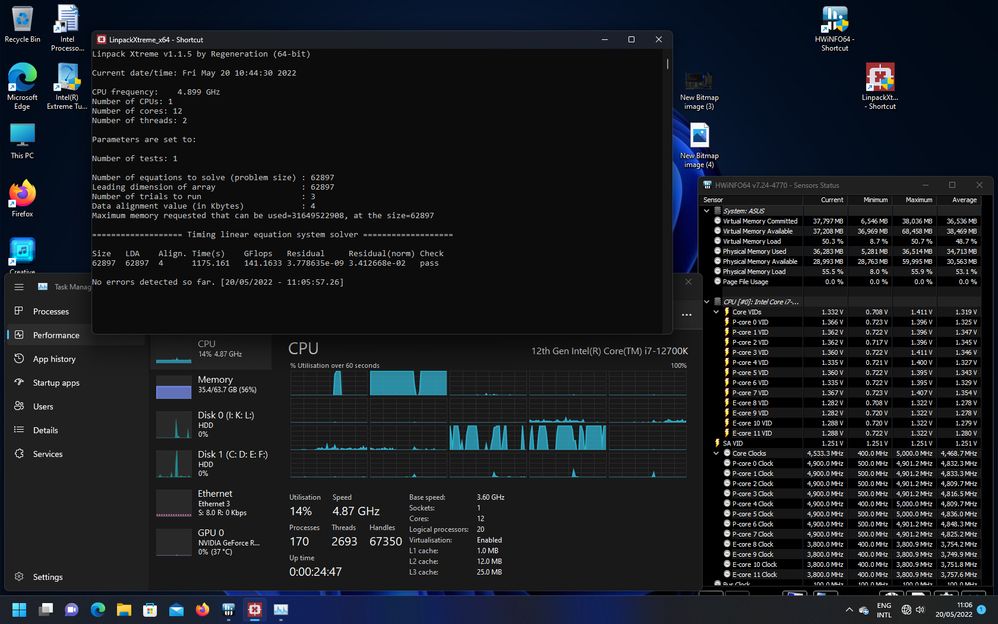 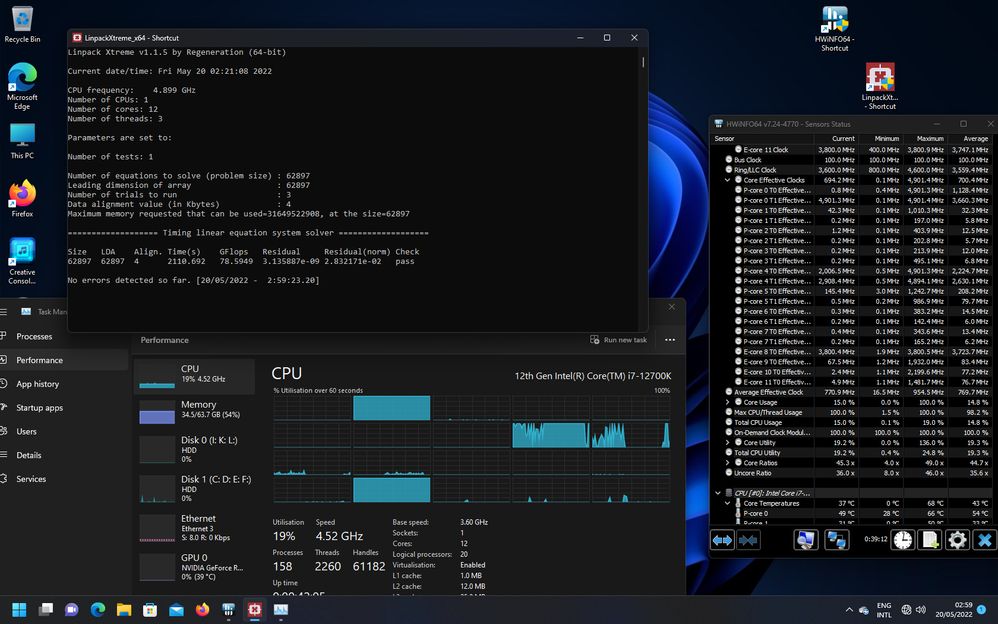 Thank you for posting on the Intel® communities. I am sorry to know that you are having issues with your Intel® Core™ i7-12700K Processor.

2. Have you experienced any performance issues with the CPU? Can you give examples?

3. Have you received any errors or crashes with apps or games?

4. Have you made any changes to the BIOS?

5. Can you provide more details about your issue?

Sometimes the system is sluggish and if feels slower then my old i7 6700k, even at boot, and I wanted to find out why and I did the test that I reported in my previous post.

It seems that when is running an app that is using few threads, (in my example 3) split on p-cores and e-cores the performance is dropping to the number of the e-cores is using without counting the p-cores, like p-cores dont exist. The performance should be a sum up from p + e cores, and is not happening when lower number of p + e cores is used, it seems.

If I park the e-cores and run the progam still uses them and performance is decreasing when 3 cores are compared to 2 cores stress test. If I remove all the e-cores from the CPU affinity and I leave only the p-cores the performance is increasing like normally should do.

Also I tested with prime 95 version 30.8 build 15 and when it runs with 12 torture tests everything is fine.

If is not a software issue I start to think that alder lake CPUs have problems, when they are not fully utilized and when p and e cores are used together, and they were not tested in all running scenarios.

Thanks for the information provided, Before we continue further, I would like to confirm the following:

1. Can you set the BIOS to default settings?

2. Can you test your setup with a minimal configuration? (CPU, 1 stick of RAM, no video card)

3. Do you get any blink code from the motherboard?

4. Can you provide more details about your issue?

After checking your thread, I would like to know if you need further assistance.

If so, please let me know.

I tested with default bios settings, with Intel fail safe settings, no xmp, and it still doesn't run as it should with 3 threads.

With 2 threads is finishing the test in about 1100 seconds, and with and about 140 Gflops.

With 3 threads should be faster and with more Gflops, but it finnishes in more then 2000 seconds  with half the Gflops (78), because it uses 2 P-cores and 1 E-core.

The program is using the 2 P-cores + 1 E-core and  is like is working only on the assigned e-core.

Is like the cores are on different CPUs not on the same one and something is going wrong.

That is the problem, and I think that is a problem with all alderlake CPUs, thats why some programs have the issues they have with the E-cores

The mainboard doesn't give any blinks. The only blinks I get is when is doing memory training and from the power led, because it doesn't have any leds on it.

Maybe is better to make a program to activate and dezactivate e-cores and not using parking. E-cores are still used by windows, even if it shows parked when I put mouse on them.

Parking or disable E-cores is not a good solution for a CPU which should work as a whole not as 2 CPUs. This is a bad implementation.

If I wanted 2 CPUs I would have bought 2 PCs.

I am still investigating this issue, in order to continue further I would appreciate it if you can confirm the following:

1. Are you enabling and disabling cores? Or just doing CPU affinity?

2. We do not support/validate 3rd party tools, please install the Intel® Extreme Tuning Utility (Intel® XTU) and take a picture of the tool.

3. Based on the report, you are running the RAM above the supported frequency. Disable the Intel® Extreme Memory Profile (Intel® XMP) at the BIOS or make sure that the RAM is running at DDR5 4800 or DDR4 3200 depending on your RAM.

4. What do you mean by"using parking"? Is that a specific setting that you are changing?

Also, bear in mind that The Intel® Thread Director helps the OS schedule threads on the best core for performance or efficiency, so it is normal to see that some tasks use only the p-cores or the e-cores. You can see more information in the following link:

I was not enabling or disabling cores. The Intel® Thread Director or OS automatically assigns the cores.

I only tested to see what happens if I make the application use only the p-cores by using CPU affinity and with 3 p-cores running the performance is increased, with 3 cores from which 2 p-cores and 1 e-core the perormance decreases ...

I don't use any CPU or mainboard utility in windows and why should I install XTU ?

I have DDR5 memory and I tested with XMP disabled , default maiboard settings and even at 4000 Mhz and it does the same thing. Is not the memory the fault.

when you set in bios Legacy Game Compatibility Mode to ON in windows when you enable scroll lock in task manager with mouse hovering over e-cores you can see that it show that the cores are parked. That's what I mean by "using parking". I don't know how that core parking should work but is not doing anything. Maybe instead of core parking should disable the e-cores.

Asus representative told me that is Intel problem what it should do and form what I see is doing nothing.

I'm not new to this forum, I had many posts in the GPU part of the CPU when I bought i7 6700k, and many things were fixed but my account was deleted and I even don't know why.

I was expecting for things to be better on this new CPU but unfortunately I'm disappointed. I feel again like beta testing on my own money.

Thanks for all the extra information. I will check on this situation further to confirm if we have more information for you.

As soon as I have any details I will let you know.

Thanks for your patience. Based on the investigation, I would like to let you know that the article you mentioned about the DRM mentions that the Legacy Game Compatibility Mode places the E-cores on standby when playing games, so the message you are seeing is usual when this is on.

Also, bear in mind that even if the XMP is disabled the processor could have been already damaged; however, if the computer is not presenting issues like crashing, shutting down, BSODs, crashing apps, etc., I would say there is no damage on it.

Bear in mind that we do not have value for the GFLOPS score, so can you let me know how are you comparing the GFLOPS score? Consider that you are using a 3rd party tool, so it may not be accurate since Intel does not validate 3rd party tools. I recommend you to use the Intel® Extreme Tuning Utility (Intel® XTU) to monitor the processor's parameters.

After checking your thread, I would like to know if you need further assistance.

If so, please let me know.

In reality no one is using a benchmark or another CPU utility. They are used to check how CPU behaves in certain situations or to test the CPU.

Imagine that the so called 3rd party app is an old game or app and at a certain point it uses 2 p-cores and 1 e-core. It means that it will run slower then if it was running with 2 p-cores, because the time used to  solve a problem for 2 p-cores + 1 e-core is the same as it was running the same problem with only 1 p-core. When running 3 threads on 3 p-cores the time is 3 times lower.

I'm not talking about Gflops now, but about time.

That program, LinpackXreme is doing a math problem and you can select how many threads to use and it shows the time it was finished and the computation power of the threads used.

Anyway if you don't care about it and try again to make me run XTU which is not able to run for stress test or benchmark a number of threads that I select, I will give up and next CPU will be from competitor.

I want a CPU that can run any app and with increase performance, even with lower count of cores used, not hindered because it has some cores that are not performing like the others or they bother the other cores to work correctly.

Have a nice day!

I am sorry for the inconvenience. I will check this situation internally one more time to confirm if we have further information for you.

As soon as I have any updates I will let you know.

Thanks for your patience. In order to continue with the investigation, can you please take a short video or pictures from the tool you are using but with all the cores enabled this time?

I made a screenshot and a video (attached). The "tool" is available at this link : https://www.techpowerup.com/download/linpack-xtreme/ 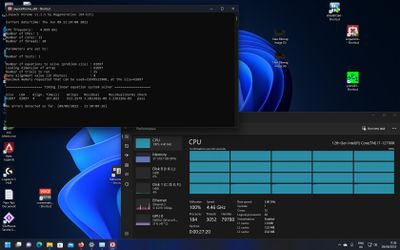 Based on the research I would like to let you know that we did not see any issue in the video since with all cores enabled the processor is increasing the utilization and frequency with the stress test and it is actually getting a very good frequency.

Also, our recommendation is to keep the processor working with default settings and under the specifications. Please bear in mind that the processor is not intended to work with a few cores only, it does have some the cores that will perform better but it is the same processor that identifies the best performing cores when running a specific task and we are unable to choose which ones will be the best ones.

After checking your thread, I would like to know if you need further assistance with any other issues.

If so, please let me know

I want to tell you that the answer I received is not an accepted one for me. I have apps/games that are using 1, 2 cores and sometimes the cpu ballances those cores and can use 3 cores. I don't have time to investigate more if they work fine or not is just that sometimes I have sound/image latency problems with interrupts and the CPU is not even fully utilized and not even the memory.

That program that I used was the fastest way to realize that the Intel's 12 Gen CPU has a problem, that can happen on other older programs.

I will test it further when AMD will realease their Zen 4 CPU and my prediction is that on AMD it will work better.

You can close this thread, for now, but is not a solved problem.

Have a nice day!