I used intel graphic command center and I tried turning system tray on and expecting a better gaming performance of my laptop. However, it made my cpu run at a very high speed when it is idle and it stucked at the base speed when playing game. That is not mentioned my cpu base speed is 1.38ghz and less than the manufacturer base speed.

I knew that reinstall windows will fix it, but I dont want to waste so much time on that. Can you guy explain why it happened and how to fix it without reinstalling windows.

Please response as soon as possible.

Thank you for posting on the Intel® communities. I understand you are having issues with your (PRODUCT).

3. Have you made any changes to the BIOS?

4. Can you take any pictures of the changes made at the Intel® Graphics Command Center?

5. Have you noticed any blue screen of death or freezes?

6. Is the only issue that the CPU got stocked at based frequency?

Q3: Yes, I have update the BIOS by dell supportassist (at least it was what supportassist said. I dont know much about BIOS. And, Im not sure is there any important change in the BIOS have been made (by the supportassist software because I have never accessed BIOS).

Q4: I will take a picture of the default Intel graphic command center but not the setting I mentioned because I reinstalled my windows and I dont think I should turn that option (system tray) again so I will need to reinstall the windows again.

Q5: There was no blue screen but my laptop was quite laggy when I study online (I used microsoft teams) and when I played game (minecraft java edition v1.8.9) , it was input lagging and the fps is bad.

Q6: I dont really know is the base frequency the main reason why my cpu performance is worse than other (my friend and user on the internet) but I think that is because my cpu is 15W and I only have single channel ram. The problem is when I turn system tray on and the usage is 100%, the cpu speed will be 1.38ghz, and it is a really bad frequency for playing game or other heavy-use work.

I will give you the information in Intel® SSU as soon as possible (the fastest will be tomorrow morning because it quite late and I have to go sleep).

it is actually 11h24 PM in my country 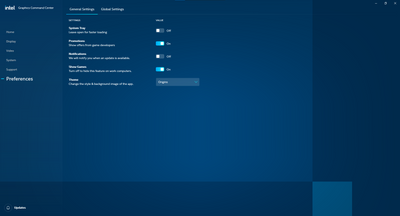 Thanks for all the information provided. I will wait for the report from the Intel® System Support Utility (Intel® SSU).

Also, let me know if after reinstalling the operating system the "laggy" issue persists.

The system information file from  Intel® SSU is attached bellow.

The performance returned normal (acceptable for me) after reinstall windows. But, can you tell me why DELL gave a cpu with 15W and 1.38ghz base speed? Does it means my cpu is worse than other core i5 1135g7 (like a fake cpu)

In this case, I cannot confirm it but some Original Equipment Manufacturers (OEM) place restrictions or limitations based on the requirements of their device. Based on the specifications of the CPU the base frequency should be 2.40 GHz, not 1.38ghz.

Please try the steps from the following article (Why the Processor Frequency is Operating Below the Base Frequency for Some Intel® Core™ Processors):

If these steps did not work I recommend you to check this behavior with DELL to confirm if there are any limitations at the BIOS or restrictions on their computer and for possible troubleshooting steps.

Thanks for your comprehension.