No RAID support for SATA drives, only NVMe?

By default, with the Intel Rapid Storage Technology (RST) "RAID/Optane" and "VMD" features disabled in the BIOS, all four drives appear as stand-alone devices. This is normal.

When I enable the RAID features, though, I'm only able to create an array from the NVMe drives - the SATA drives are unavailable, meaning:

I spent several days working this issue with the motherboard manufacturer (MSI). They ultimately concluded that this behavior is due to the underlying RST, and not to their board or BIOS. I know that vendors like to blame one another, but the last person I spoke to there made a compelling case that 1) MSI is "passing through" the native RST behavior here, and 2) there was the same/similar problem with RST's predecessor (which he called "ROC") which may persist. So, I'm asking for input here on the Intel forum.

I'm attaching two screenshots of the Intel Optane Memory and Storage Management tool to illustrate the problem. Observe that the RST driver detects the two SATA drives (top) but won't let me create an array (bottom). 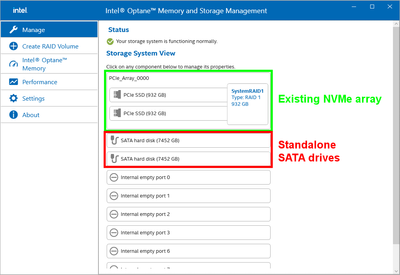 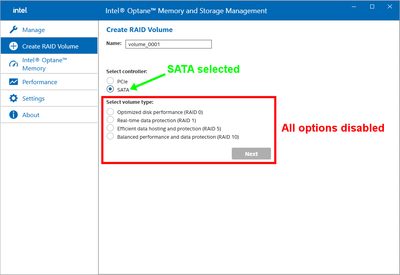 I can send screenshots of the equivalent BIOS screens, too, if that would help. They basically illustrate the same problem using a different GUI.

Thank you for any guidance you can provide!

You cannot have both SATA and NVMe drives in the same RAID array. This simply is not allowed. You can have two RAID arrays, one with SATA drives and one with NVMe SSDs, however.


You cannot have both SATA and NVMe drives in the same RAID array... You can have two RAID arrays, one with SATA drives and one with NVMe SSDs

That is what I'm trying to do. Per the original post:

Neither the Intel tool in Windows nor the BIOS will let me create an array from the SATA drives once the RST RAID feature is enabled, though.

None of these changes made a difference; I still cannot create an array from the two SATA drives using either the Intel storage tool in Windows nor in the BIOS.

I appreciate the information you have provided. In order to better assist you, could you please provide the screenshot of the BIOS screen where it shows the RAID and drive settings?

Steven - Thank you for taking the time to reply. I am attaching a series of BIOS UI screenshots to illustrate the behavior. What they show is:

Note that VMD is disabled for all three "root ports". From what I can tell, the first two ports (0/6/0 and 0/27/4) are for the NVMe drives, and the third port (SATA Controller) is for all six SATA ports on the board. 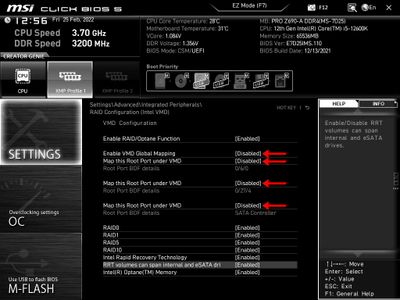 With this default configuration, all four drives appear on the System Status page as stand-alone devices; this is expected. 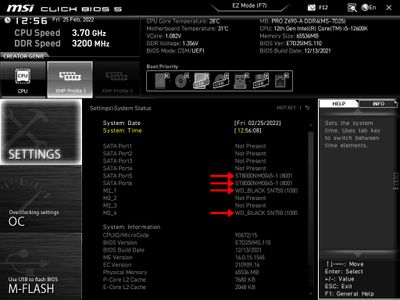 Correspondingly, with VMD disabled, none of the drives are available for creating a RAID array; this is also expected. 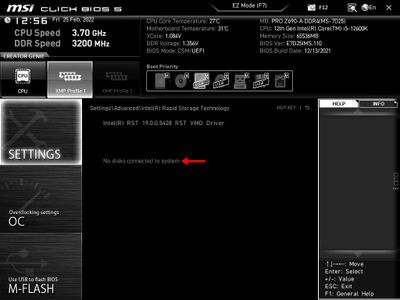 In this example, I enable VMD Global Mapping for all ports in order to support RAID. Observe that when the global setting is "Enabled", the status of all three ports below it are also set to "Enabled". 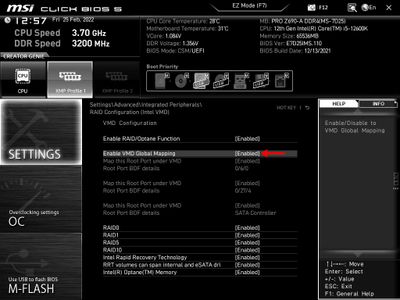 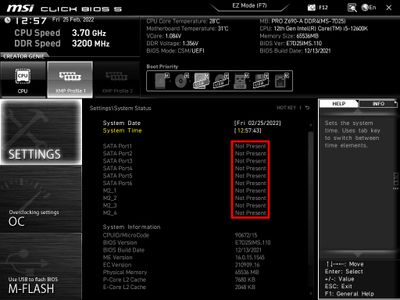 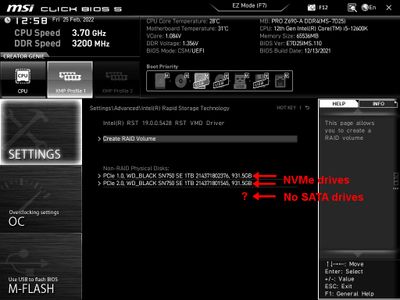 My question is: How can I make the SATA drives appear in this last screenshot so I can make a RAID 1 array from them?

We are currently working on this issue based on the information and images provided. As soon as I have an update, I will let you know.

Thank you for continuing to look into this on my behalf.

If there is anything I can do to help support the effort (e.g. try different configuration, install diagnostic driver) please let me know. There is nothing critical on these SATA drives yet, so I can experiment with them if that would reveal any useful information.

Upon checking the information, not all SATA ports support RAID. By any chance, have you tried a different SATA port?

If you have not already, I recommend you to contact MSI support (https://www.msi.com/support) to verify this, since if the drives are not RAID available in the BIOS, they are not available in the RST console.

Upon checking the information, not all SATA ports support RAID. By any chance, have you tried a different SATA port?

This board has six SATA ports. My two drives were originally connected to ports 5 and 6. I just tried moving them as a pair to ports 3 and 4, then to ports 1 and 2. In each case, after rebooting to the BIOS, the drives were still not visible in the Settings > Advanced > Intel Rapid Storage Technology configuration page.

If you have not already, I recommend you to contact MSI support (https://www.msi.com/support) to verify this, since if the drives are not RAID available in the BIOS, they are not available in the RST console.

Per the original post, I had already worked with MSI on this issue before posting here. To summarize, they concluded that they are exposing the native Intel RST behavior in this case and, in turn, the lack of SATA RAID support is due to a problem with the underlying Intel components, not MSI's implementation of them on this particular board/BIOS.

As the end user, I only have access (or perhaps skills) to work with the higher-level tools like the BIOS configuration screens and Intel Optane Memory and Storage Management tool. It appears that the problem exists at a lower level than this, so I need help from the vendors to determine conclusively what the cause is.

Please advise on how we can proceed to gather specific, actionable evidence of the problem's cause. Thank you.

We appreciate the information provided. Based on it, I am going to keep working on this in order to check other possibilities. As soon as I have an update, I will let you know.

After we have investigated this issue, we have determined that since the drives are not showing up in BIOS, the issue seems to be related with the motherboard. For this case, we recommend you to continue the support with the board manufacturer.

If you need any additional information, please submit a new question, as this thread will no longer be monitored.

Unfortunately, the problem has become that neither vendor will take responsibility for the issue, nor provide sufficient evidence to demonstrate that the other is at fault.

As I asked previously:

I am willing to help - but I need something more than speculation from either side to act on.

I talked with MSI again tonight, and received conflicting feedback during my call with their support analyst (1. My configuration cannot work because using 2xNVMe and 2xSATA drives consumes too many PCI lanes; 2. Their in-house tester successfully made this configuration work; 3. My board is broken and needs to be RMAed). I asked to speak to a supervisor, and am awaiting a callback.

In the interim, I tested a few new hardware configurations and discovered what I believe is some useful evidence:

The most obvious differences between these drives are:

There are probably other differences, as well. Note that both types of drives are visible to Windows as stand-alone drives, regardless of the VMD settings, so the board/chipset/driver/etc. recognize them all to some degree - it's just that I can't create a RAID array from the Seagates.

If not, what other properties of these two types of drives might account for the difference in behavior?

Thank you for your continued support!

If you need any additional information, please submit a new question, as this thread will no longer be monitored.