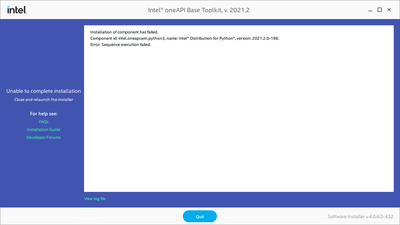 In addition, the logs are deleted before they can be viewed. 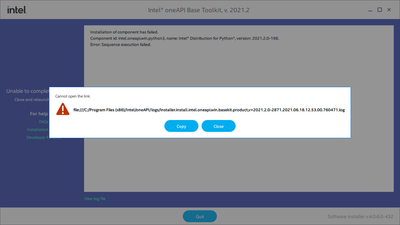 This appears to be a problem that is happening to a number of users, and which has not yet been satisfactorily solved (despite the forum post status).

At a system level, I have tried the following without success.

This appears to be a Windows-specific issue, as the Intel AI Analytics Toolkit installs successfully in Ubuntu 20.04 LTS running under WSL2.

We just posted the 2021.3 version, engineering is asking if you would test with that version and see if it resolves the issue. They are still investing the error that is showing in the logs you provided me.

Thanks for posting regarding your concern. Really appreciate the screenshots provided and the information gathered on the issue. We are currently replicating the issue on our end and thereafter would be checking on it with our internal team. Kindly wait for 2-3 business days. We will get back to you as soon as possible.

Thus far we have been unable to replicate this issue in house. Is there anything custom about your windows build, or is it just a standard Windows install?

Additionally, can you double check the log location and confirm there is in fact nothing there? Unfortunately, without logs it is going to be difficult to root cause.

Hi Chris, thanks for your investigation into this issue.

I am not aware of this being a custom build of Windows. I have included the full Windows specifications from System About below.

I will run another install and see if any log files appear in the location you've suggested. I'll also look through the Windows Event Log and see if there are any relevant events.

I will PM these to you along with the entries in Event Viewer to save me redacting them all.

I received everything, thanks for that, I am currently investigating and will get back to you shortly.

We just posted the 2021.3 version, engineering is asking if you would test with that version and see if it resolves the issue. They are still investing the error that is showing in the logs you provided me.

Thank you very much for your help—Intel Python has successfully installed with oneAPI Base Toolkit version 2021.3!

This was a clean install, with the non-Python components installed from 2021.2 uninstalled first. I didn't attempt an upgrade installation.

Thanks for providing us the update on the post. Proceeding further, we are closing this thread. However, feel free to create a new thread if there are any queries or concerns. Have a nice day!