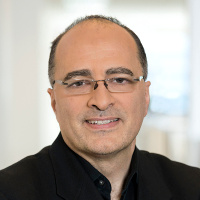 User Bio
A veteran of the semiconductor and storage industries, Ilkbahar rejoined Intel in 2016 from SanDisk Corporation (acquired by Western Digital Technologies Inc.). Most recently at SanDisk, he was vice president and general manager of storage-class memory solutions, a business unit dedicated to non-volatile, high-performance memory technology. He led the groupd's commercialization efforts, overseeing engineering, marketing and ecosystem development. Earlier in his SanDisk career, Ilkbahar led marketing for enterprise storage solutions and managed several of the companyd's business units, including the Connected and Computing Solutions Group, the Wafer and Components Group and the 3D Memory Group. He joined SanDisk in 2006 with the companyd's acquisition of Matrix Semiconductor Inc., where he had held various engineering and management positions since 2001. Before joining Matrix, Ilkbahar spent nine years in Inteld's microprocessor division, holding design engineering roles and management roles that spanned from the Intel486 processor to the Intel® Itanium® processor. Ilkbahar earned a bachelord's degree in electrical engineering from Boğaziçi University in Istanbul, Turkey; a masterd's degree in electrical engineering from the University of Michigan; and an MBA degree from the Wharton School of the University of Pennsylvania. He holds more than 50 patents in the fields of semiconductor process, device, design and testing and has published multiple conference and journal papers in his areas of expertise.
Community Statistics