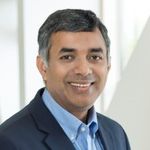 View all
User Bio
Narayan Srinivasa received his B.Tech degree from the Indian Institute of Technology, Varanasi, in 1988 and his Ph.D. degree from the University of Florida in Gainesville in 1994, both in mechanical engineering. He was a Beckman postdoctoral fellow with the Human–Computer Intelligent Interaction group at the Beckman Institute in University of Illinois at Urbana-Champaign from 1994 to 1997. He is currently the director of machine intelligence research programs at Intel Labs, Santa Clara, California. Prior to that, he was the chief technology officer at Eta Compute, Westlake Village, California, focusing on the development of ultralow-power artificial intelligence solutions for audio applications. From 2016 to 2017, he was chief scientist and senior principal engineer at Intel Labs. He has authored more than 90 papers in peer-reviewed journals and conferences and has been issued 66 U.S. patents.
Community Statistics