Artificial Intelligence (AI)
Engage with our experts on topics in AI 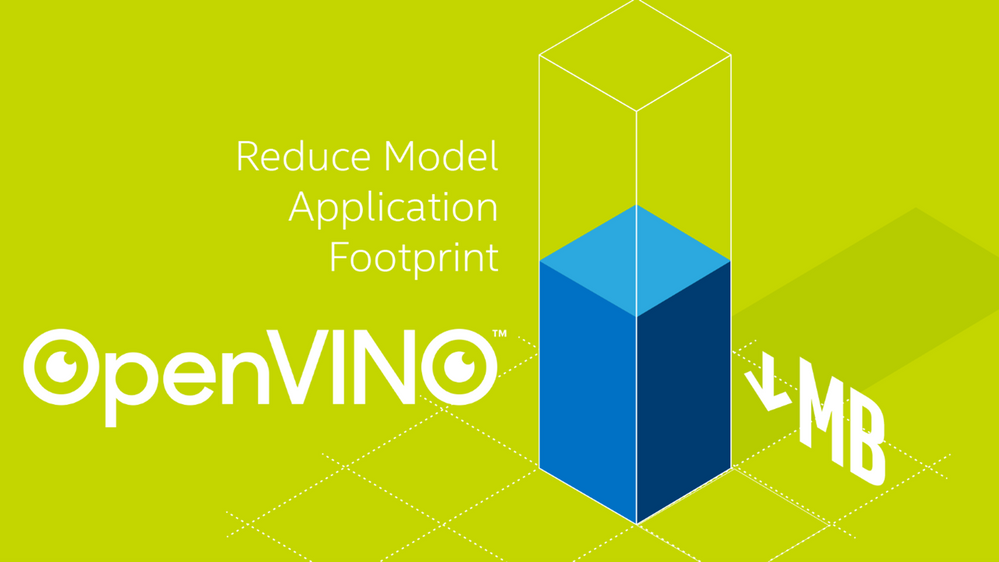 Advances in AI and Deep Learning make it possible to solve complicated tasks from intelligent video processing and text analysis to enhancing simple features like user interfaces by introducing voice-activated functions, text correction or suggestions, and other features. The Intel® Distribution of OpenVINO™ toolkit speeds up AI workloads like computer vision, audio, speech, and language and is optimized for Intel’s line-up of scalable CPU, integrated GPU, VPU and FPGA processors.

However, the addition of AI functionality comes at cost. Not only in terms of the data science work to produce models, but in increased processing capacity during inference and increased application footprint since it requires redistribution of the model as well as runtime binaries. In addition, depending on the use case, inference can require a substantial amount of memory to execute.

One of the objectives of the OpenVINO™ toolkit’s design is to make Deep Learning inference as lightweight as possible. We are not only improving performance but also working on reducing the footprint of the final application to make it easier to redistribute. Let’s dive into recent changes that we have done in this area.

Key components in the redistributable inference

Deep Learning applications require key components to perform inference. It consists of the application logic itself (which is the key focus on Intel® Distribution of OpenVINO™ toolkit), Deep Learning model(s) and runtime libraries. Models are typically trained in one of the popular frameworks, such as TensorFlow and PyTorch, and optimized with use of OpenVINO™ toolkit’s developer tools, such as the Model Optimizer and the Post-training Optimization Tool, while only the runtime libraries are copied from the OpenVINO™ toolkit distribution.

The relationship between the final application and distribution is shown in figure below.

It is important to mention the following:

A deep learning model contains two portions—weights and activations. The size of the model is primarily dictated by the size of its weights, which are mandatory for the model to function. However, the precision of weights can be changed, bringing substantial improvements to its size. Beginning with the Intel® Distribution of OpenVINO™ toolkit 2020.2 release, such improvements were introduced to the Intermediate Representation (IR), which is an internal format that represents the model’s weights and activations, for all supported and distributed models.

We observed that lowering the precision of model weights from float32 to float16 does not affect its accuracy. During the inferencing phase, such weights can be cast back to the float32 data type on hardware which does not support float16 (e.g., 3rd generation Intel® Xeon® Scalable Processors). Using this method, we can reduce the model size twice without any visible impact on performance and accuracy.

The possible compression rate of quantized models can be much higher. For example, quantizing weights to int8 precision allows a potential reduction of the model size by a factor of four; however, it requires additional modifications of the model representation, and these modifications were introduced in the latest release of Intel® Distribution of OpenVINO™ toolkit.

Fig.1. An example of the quantized compressed model

This operation is expressive and allows for the mapping of values from arbitrary input and output ranges. It means that while producing the quantized model, we can preliminarily quantize its weights and store them in int8 precision, adjusting the input quantization parameters accordingly. This mechanism has been implemented in the OpenVINO toolkit’s Model Optimizer and Post-training Optimization Tool.

For backward compatibility, we inserted a “Convert” operation that performs the transformation of the weights back to floating-point precision at model load time. Combining the compression of quantized weights to int8 precision with the storage of other parameters in float16 allows us to achieve the aforementioned 4x model size reduction. 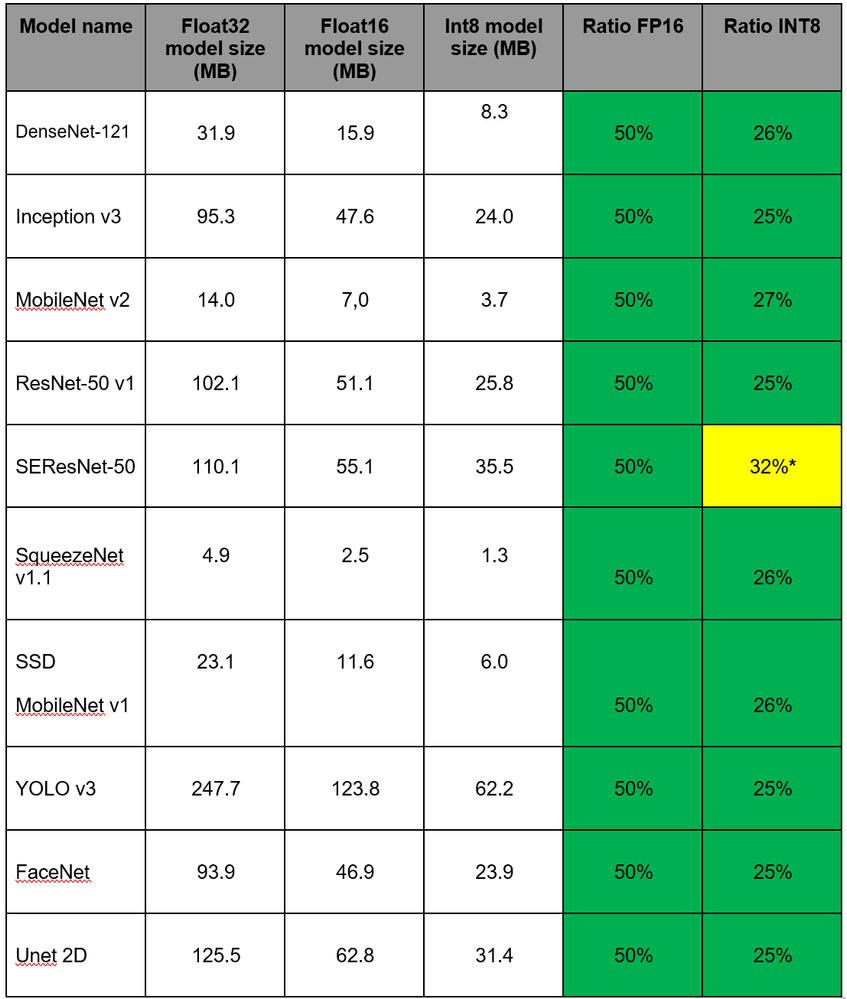 Table 1: Comparison of the size of float32 vs. compressed models. * - some of the layers of the model are kept in the floating-point precision.

While the model size is somewhat controllable during design, runtime libraries are something that you get from distribution and a part of your model that you’ll need to pack into your application distributable. Hence, we reduced model size within those libraries from our regular releases of the Intel® Distribution of OpenVINO™ toolkit.

One year ago, the OpenVINO™ toolkit’s Inference Engine consisted of a single, shared library, which included all of the functionality even though some of the building blocks could be unused for particular scenarios. Based on that, the library was split into multiple, smaller libraries with each library representing a dedicated building block which you can choose to use or not. 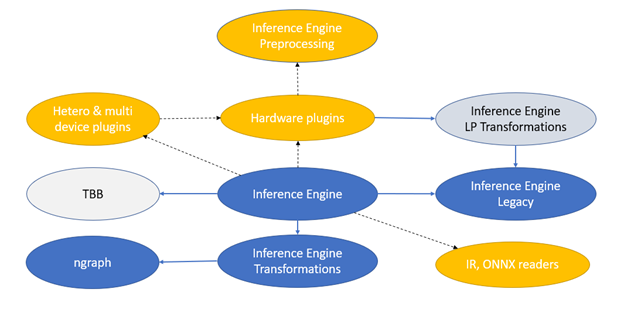 To optimally execute the inference procedure, the Inference Engine library implements basic threading routines as well as complex task schedulers with the TBB library under the hood. The TBB dependency, by default, contains debug information for the binaries, which gives an extra overhead to the total Inference Engine runtime size, but the debug information is not needed for productizing applications. The stripped TBB binaries included in the Intel® Distribution of OpenVINO™ toolkit, starting from the 2020.2 release, which results in the TBB library only taking 0.39 MB—a 5x reduction in size when compared to the original 2.12 MB containing debug symbols.

The nGraph library is a key component in the OpenVINO™ toolkit, which is responsible for model representation. This component allows to create or modify networks in the runtime. In the 2020.4 release, we separated the ONNX importer from the nGraph library, which results in a reduction in size.

The CPU plug-in (also known as the MKL-DNN plug-in) library is another key component in OpenVINO™ toolkit, which is responsible for model inference on Intel CPUs. It contains target-specific graph optimizations, layers implementations, threading, and memory allocation logic. Several compute-intensive routines like Convolution, FullyConnected, and other CPU plug-ins use the OneDNN fork library as a third-party component. This component is statically linked into the main CPU plug-in library. Another common operation in DL inference workloads is matrix multiplication which was supported via another third-party component, the Intel® Math Kernel Library. The Intel MKL has a large enough size since it solves various mathematical problems. To save disk space, instead of using the full version of MKL libraries, the OpenVINO™ toolkit redistributes custom dynamic libraries (called “mkltiny”) with a reduced list of functions which were built using official functionality. Despite this, the Intel MKL dependency still takes up a significant size of the distribution (see Table 2).

In the 2020.2 release, the oneDNN fork was migrated to 0.21.3 version of the original repository. This version includes optimizations for sgemm routine which allows us to achieve comparable performance to Intel MKL. In addition to this several optimizations were implemented inside the plug-in which allowed to finally get rid of Intel MKL dependency and fully rely on the plug-in and oneDNN fork capabilities. As a result, we were able to get about 1.8x binary size reduction for libraries responsible for CPU inference (see Table 2). We also managed to keep the same functionality and the same (or sometimes, even better) performance for all workloads in our validation and testing. However, to make sure this will not degrade in a specific user’s scenario, we provide the cmake option GEMM=MKL, which allows users to build the CPU plug-in from sources with an Intel MKL dependency.

To summarize, the table below outlines the minimal runtime sizes for several target devices (see Table 3):

Due to historical reason Intel C++ compiler was used to compile OpenVINO binaries on Microsoft Windows platform. While it gives good performance out of the box, it also increasing the binary size due to loop unrolling, multiple copies of the same code depending on input parameters and so on. Moving to Microsoft Visual studio C++ compiler required few rewrites of the code fragments to keep performance level while reducing binary size. So, since 2021.1 OpenVINO binaries on Windows are compiled with Microsoft Visual studio C++ compiler and it gives additional 2.5x decrease in runtime size.

While the OpenVINO™ toolkit contains all needed components which were verified on target platforms, you can build runtime libraries from sources yourself. The open-sourced version allows you to compile runtime with certain options that will additionally reduce size.

You can use ENABLE_LTO option which enables Link Time Optimizations (LTO) during the Inference Engine to be built on Unix-based systems. The default value is off because it takes a significant time to link the runtime binaries, but the OpenVINO™ toolkit release packages are built with this option enabled to minimize runtime size. Generally, LTO gives a 24% decrease in runtime size for components where it’s enabled.

Advances in AI and Deep Learning make it possible to solve complicated tasks. However, the addition of AI functionality comes at cost, not only in terms of the data science work to produce models, but in increased processing capacity during inference and increased application footprint since it requires the redistribution of the model and as well as runtime binaries. Besides, depending on your use case, inferencing can require a substantial amount of memory to execute. In this blog, we shared how we not only improved performance but also reduced the footprint of the final application to make it easier to redistribute. Get the Intel® Distribution of OpenVINO™ toolkit today and start deploying high-performance, deep learning applications with a write-once-deploy-anywhere efficiency. If you have any ideas in ways we can improve the product, we welcome contributions to the open-sourced OpenVINO™ toolkit. Finally, join the conversation to discuss all things Deep Learning and OpenVINO™ toolkit in our community forum.

Software and workloads used in performance tests may have been optimized for performance only on Intel microprocessors.

Performance tests, such as SYSmark and MobileMark, are measured using specific computer systems, components, software, operations and functions.  Any change to any of those factors may cause the results to vary.  You should consult other information and performance tests to assist you in fully evaluating your contemplated purchases, including the performance of that product when combined with other products.   For more complete information visit www.intel.com/benchmarks.

Performance results are based on testing as of dates shown in configurations and may not reflect all publicly available ​updates.  See backup for configuration details.  No product or component can be absolutely secure.

Your costs and results may vary.

© Intel Corporation.  Intel, the Intel logo, and other Intel marks are trademarks of Intel Corporation or its subsidiaries.  Other names and brands may be claimed as the property of others.  ​

Mary is the Community Manager for this site. She likes to bike, and do college and career coaching for high school students in her spare time.
Authors
MaryT_Intel