Windows 10 machine is built with Intel EMA Agent and MEBx password randomised and stored within Intel EMA (Accessible via RestAPI).

Support engineer needs rebuilds the PC - a rebuild will re-install the EMA Agent and not rationalise an existing record if it has the same NETBIOS name:

So you end up with 2 machines with the same name, the original record has the actual MEBx password and the new one doesnt so no CIRA connection is made - and both become essentially useless.

What is the recommendation for rebuilds, EMAAgent install - it would be nice if it could QA the existing mEBx password against the one stored on the SQL Database for any existing record with the same NETBIOS name - and then rationalise the records into one.

As it stands, is the only solution MEshcmd AMTACMDeactivate with a RESTAPI lookup against an existing machine within EMA for the MEBx password?

So step would EMA re-build steps would effectively be (or is there something easier)?

I had to go into MEBx and edit DNS suffix.

Its a manual step, but a pretty simple one. Not ideal, as in an engineer cannot rebuild a PC without having to either DE-Provision AMT first, or enter the DNS suffix in via MEBx afterwards.  from: https://www.intel.com/content/www/us/en/support/articles/000059019/software/manageability-products.h....

So the correct solution to rebuild a machine that was provisioned by AMT is the following (if you forget to de-provision the PC via Intel EMA before the rebuild):

Thanks Victor G. and Jose A. for providing me with the answers.

Thank you for joining the Intel community

You want to take a look at the following article about this issue:

Let me know if it works

Thanks ever so much for the Link to the SQL script.

Good: I have tested the SQL script this morning and it merged the 2 records and MEBx password was moved.

Bad: However CIRA is yellow (from Intel EMA console) and HW management not possible. I will de-provision and re-do this test just to confirm it happens every time (CIRA going Yellow). <<<<<_UPDATE_>>>>>> I was using our DEV build and noticed no PKI Certs in Local Machine store. This is probably my issue. Will update this thread.

Again - Rebuild and CIRA is yellow - after the duplicate record is removed using the SQL script.

I built another machine with AMT Not provisioned and it works fine, its the rebuilds with the script that have this CIRA issue. 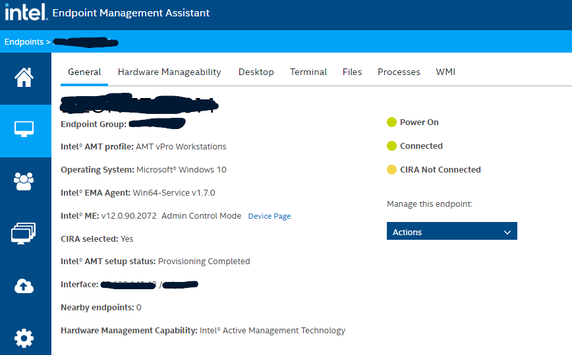 If I try and connect to the client from "Device page":

We will wait for your outcome, thank you for your update.

See my notes above (I accidentally replied to myself).

I have tested this on 2 machines now, perfectly replicable. So SQL script is close, but CIRA connections not possible.

Thank you so much for contacting Intel customer support,

Please proceed with the following steps on the machine that’s been having the problem after the rebuild was done on it:

1-Uninstall EMA directly from the machine

2-Proceed with the unprovisioning of the machine

3-From the EMA web console select the option that says stop managing endpoint.

Once you have completed all the steps you should be able to reprovision the computer.

This topic is about rebuilding Windows 10/11 machines that have already been provisioned by Intel EMA.

The SQL script that Jose A. sent me: https://www.intel.com/content/www/us/en/support/articles/000087537/technologies/intel-active-managem... is supposed to handle the MEBx password when the Intel EMA agent gets re-installed on the rebuilt machine (that the support engineer forgot to de-provision) by merging the Intel EMA DB records for the duplicate Hostname.

However my feedback is that although the SQL script merges the records and the sole record left wihin Intel EMA has the correct MEBx Admin password, I cannot connect to the rebuilt device via Intel EMA as the CIRA connection is yellow: 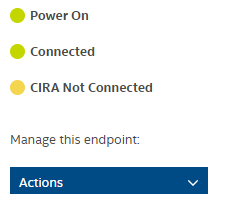 Thank you so much for your response.

In this case, the SQL script that you run did what it was supposed to do; however, I understand that you still have a problem with CIRA not being connected in this rebuilt system; nevertheless, that needs to be seen as a separate problem and; therefore, must be addressed separately, you have the option to follow the steps in the article below if you don’t want to unprovisioned and provisioned the system entirely with the steps previously provided.

Please let us know which path you take and the outcome of any steps that you decide to follow.

Please let me know if you still need further assistance

We have not heard back from you.

If you need any additional information, please submit a new question as this thread will no longer be monitored.

I had to go into MEBx and edit DNS suffix.

Its a manual step, but a pretty simple one. Not ideal, as in an engineer cannot rebuild a PC without having to either DE-Provision AMT first, or enter the DNS suffix in via MEBx afterwards.  from: https://www.intel.com/content/www/us/en/support/articles/000059019/software/manageability-products.h....

So the correct solution to rebuild a machine that was provisioned by AMT is the following (if you forget to de-provision the PC via Intel EMA before the rebuild):

Thanks Victor G. and Jose A. for providing me with the answers.