Runtime models based on L1-TLB metrics

We are building a model to predict the CPU runtime of a Haswell Intel Xeon E5-x600 v3 processor using the `perf` tool from the `linux-tools` package and running various benchmarks. The model uses TLB events, including dTLB and sTLB, as predictors. However, the results we obtained were unexpected, as a single-feature model over the same benchmark (and several others) showed a trend opposite to what we anticipated: 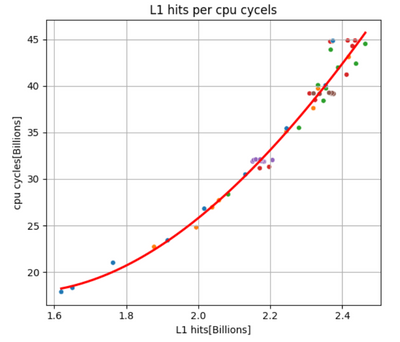 We would expect that higher number of hits will lead to decrease in cpu cycles.