The Spark: The Cricketer 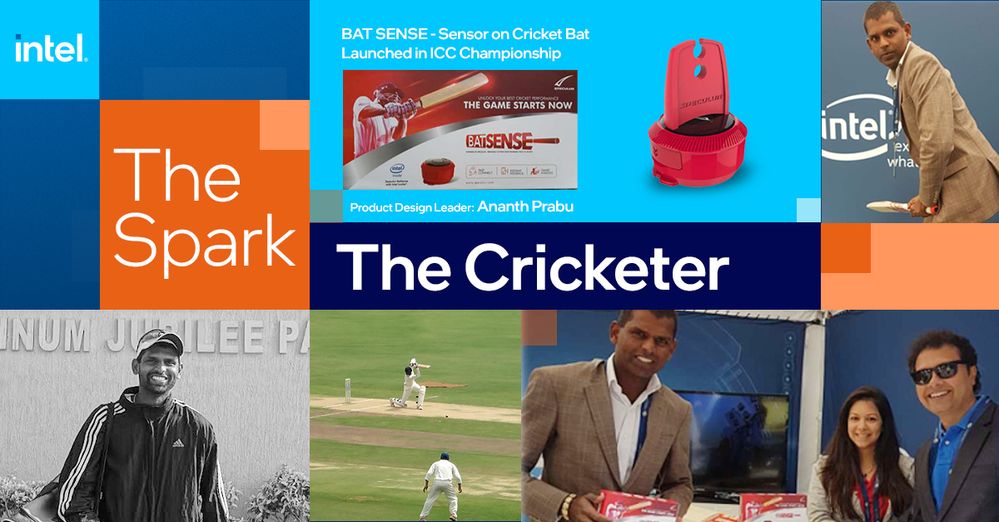 Intel is a microcosm of the world, peopled by dynamic, multi-dimensional individuals who are not only the best at their jobs but also some of the most inspiring personalities to work alongside. Explorers, creatives, performers and gamers — in this blog series, some of our incredible colleagues share insights into their inner lives, unveiling a never-before-seen portrait of them — and the passion projects that drive them daily.

The Spark: The Cricketer

Cricket. It’s the bridge that spans generations; the glue that binds a nation. But when every starstruck youngster in India dreams of becoming a cricketer, what does it take to rise above the ranks of the ordinary? Through this exchange with Ananth Prabhu, we discovered a story propelled by bold leaps of faith and deep passion for a sport that’s larger than life.

Welcome, Ananth, and congratulations on completing over a decade at Intel.

In October 2017, I took a two-year break to play cricket for the First Division Team of South Eastern Railway. I returned to Intel in August 2019. And right now, I’m Engineering Manager for Product Design and Thermals under the NEC Group.

You took a two-year hiatus to play cricket before going back to Intel?

The initial plan was to play six months of professional cricket. However, it ended up getting extended to two years. But yes, I know how crazy that sounds. And honestly that’s what I thought myself when the opportunity first came up. Interestingly, though, it was my managers at Intel who pushed me to grab it with both hands. They said to me, “Why don’t you just go on a vacation for these six months instead of quitting?” They gave me that option, and the assurance that my job would be waiting for me the entire time. They even stayed in touch with me throughout the time I was away, asking if I needed any help. Can you believe that?

It sounds too good to be true…

Exactly. Not many companies will give you that trust and space to pursue your passion, but that’s what Intel has done for me, and I’m so grateful. The thing is, when you play knowing that you don’t have a backup plan, you give it your 100%. I really wanted to give it my all, see how far I could go. So, I quit Intel. And I was lucky to have managers who understood me and supported this.

Unfortunately, those 2 years with South Eastern Railway were not my best, in terms of performance. That said, I have no regrets.

Take us back to how it all happened.

Sure. So… in 2017, a bunch of us from Intel were at the ICC Champions Trophy. We were in London to enable the players with a really cool new product called BatSense. It’s a small mechanical sensor that’s mounted on the bat to measure a range of parameters on every stroke so that batsmen can finely track their performance.

So, you were in the U.K. for the Champions Trophy, and…?

Yes, so… a friend who played for a county team made some introductions. I bowled to the players a few times and before I knew it, I was being asked to join the Berkshire County team. I still remember my first match with them: 17 June 2017.

The very first ball of my first over was hit for a boundary. I could see the looks on my teammates’ faces. But I reminded myself that this was the first time I was facing these conditions. English pitches aren’t kind to spin bowlers. So, I just gathered myself and continued playing. By the end of that match, believe it or not, I had bagged a 5-wicket haul!

For any bowler, that’s a feather in the cap. And it was my debut on English soil. That will always be a very special memory. You can see my name on the scoreboard with “5” under the “W” column.

So, that experience showed you that you had what it takes to play professionally. You had the “spark.”

I guess so. There’s just something special about making a mark like that… on English soil, the home of cricket. So, yes, that really strengthened my self-belief. But even when I was younger… in the Under-14 category… somehow the coach liked the way I played and he gave me a shot, even though I didn’t have formal training, you know? Then, in the Under-16 team, I made captain. So, I guess, I did see a future for myself as a cricketer even then.

What you told us earlier really stood out. When you said you had a disappointing start to your first over... but then you had the mental resilience to change that around and end up with an enviable wicket-taking spree.

That’s true. I’ve learned not be afraid of stepping out of my comfort zone. On that occasion, in England, despite feeling like a fish out of water… I just gritted my teeth and played the only way I knew how… and it paid off!

What other piece of advice would you give to aspiring cricketers?

First — find out what you’re good at and be true to your game. It’s fine to idolize someone. I look up to Anil Kumble and Rahul Dravid, but I don’t copy them. And neither should you copy anyone else. Find what makes you special and bring that to the fore.

The second thing is — always reflect. Analyze your practice sessions so you know what went well and what didn’t. Even one small improvement daily really adds up in the long run.

Sounds like great life advice in general. Is this something you say to your teammates at Intel as well?

Definitely. And I always believe everyone should have their own passion. It could be anything. I’m always ready to support them in pursuing their passions now that I am a manager myself. I can never forget what my Intel managers did for me and how they gave me the confidence to follow my dream. It’s all coming full circle, in a way.