Big Ideas
Announcements
The Intel sign-in experience is changing in February to support enhanced security controls. If you sign in, click here for more information. 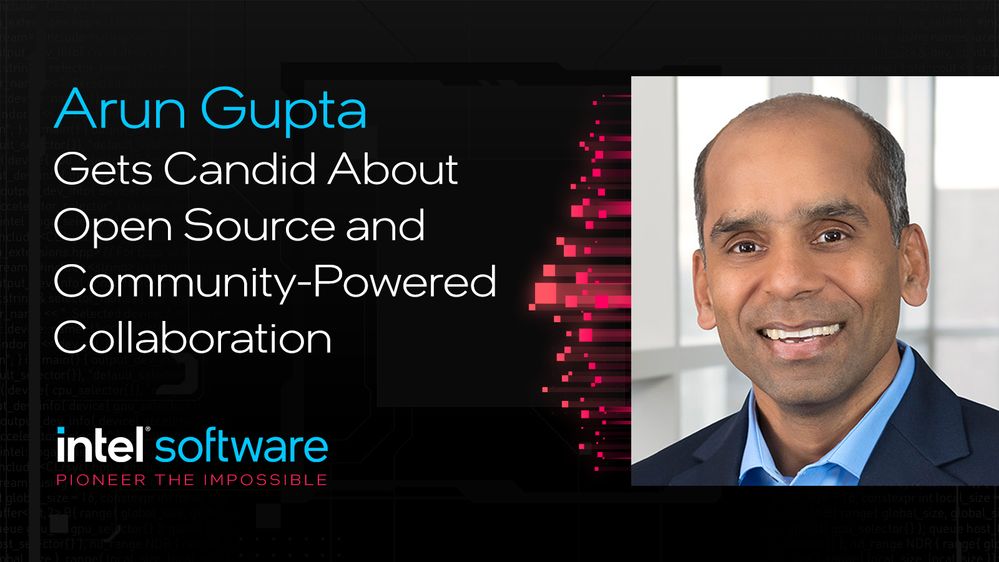 When you sit down with Arun Gupta, it’s hard not to be awed by his accomplishments and deep subject-matter expertise. For nearly two decades, he has led companies such as Apple, Amazon, and Sun Microsystems through systemic change to embrace open source principles. Today, he is VP and General Manager of the Open.Intel group or, as he puts it, “Intel’s Chief Storytelling Officer.”

Adding to his open source chops, Arun is also a passionate open source advocate and avid practitioner. He is elected chair of the Cloud Native Computing Foundation (CNCF) Governing Board, where he works with CNCF leadership and member companies to grow cloud-native ecosystems. Plus, he’s delivered tech talks in over 40 countries, authored multiple books, volunteers as a Docker Captain, and is a skilled Java Champion and Java User Group leader. He also founded Devoxx4Kids, a global non-profit that promotes technology education for children.

In the first part of this two-part series, Darren Press, Head of Marketing for Software and Advanced Technology at Intel, talks to Arun about his passion for open source, what led him to embrace open source principles so wholeheartedly, and why diversity and inclusion are essential to open source values.

“Back around 2005, I was working at Sun Microsystems and the mandate came down from the top that we needed to take the company open source. We quickly realized that going open source didn’t just mean dumping source code over the firewall. It was about making significant culture changes. It meant no more water cooler talks that only included a few people. Everything had to be open, which meant discussions needed to be summarized on a public mailing list so that everyone could participate. There was an adjustment period for sure, but it was so exciting to be part of building out those strategies.”

Wow. It must have been amazing to be a pioneer of open source at Sun Microsystems. I know Sun was a major contributor to open source software, especially MySQL. What learnings did you take from Sun that help you drive value today?

“In my opinion, the biggest value is community-powered collaboration. Every single project is made better by having a community involved, and with that comes diversity and inclusion. You don’t want your project to be exclusively used by a certain gender, age, or nationality. You want your project to explode in popularity. Open source is a platform enabler—it brings projects to life.”

“I also think it’s an amazing career builder. I’ve been fortunate to have worked at many companies because I’ve been operating purely in open source for so long. I think of my career as a string filled with beads, and each bead represents an open source experience that has helped me build my resume and grow my career.”

It’s exciting to see that the open source movement isn’t all about technology. Rather, it’s about bringing people together to reach a common goal. On top of this, how do you see open source changing the tech landscape?

“If you checked your email today, streamed a movie, checked your social accounts, or did a bank transaction, any sort of thing—there is a very high chance, almost 100%, that there was some open source software involved. Most likely, that software is running on a Linux OS, using some Java, or running on an orchestration system like Kubernetes. These are thriving open source projects making your daily life possible.”

“Open source is prominent and pervasive across the industry because it has removed the need to start from scratch. If you want to do something cool, you can look at what already exists in that space. Maybe 80% of the functionality is already there and sustained by a community of maintainers. So, if you understand the community dynamics, then all you have to do is contribute 20% of the features and you have your project!”

Arun, you make it sound so simple.

“It changes the way you work. You contribute resources to the project, as opposed to building out a 50-person team. So, I think open source truly has changed how the industry works. If you think about any of the top bleeding-edge technologies today, they are all heavily open source centric.”

What about companies that don’t leverage open source? What’s the picture look like for them?

“Think about what it means to be closed off. It means the responsibility is all yours: the engineering team, the docs team, and the QA team. It means accounting for the diversity factor: hiring people of all ages, genders, and nationalities—that’s all on you, and you must be mindful of it. Testing, marketing, budget—every aspect of the project, it’s all on you.”

“Imagine doing all of that on your own dime. On the flip side, if we look at Kubernetes, for example, they are supported by more than four thousand developers across hundreds of companies from all over the world. That’s the power of open source.”

Speaking of developers, how are developers from every corner of the world able to contribute to open source and make an impact?

“I think it’s misguided to focus only on developers. Yes, we need developers to contribute to open source projects, but we also need product managers and project managers who can triage glitches. We need technical writers who understand the features and can prepare the documentation. We need testers and people who can organize events. Developers play an important role for sure, but open source is about people from different backgrounds coming together to create something together. That’s the beauty of open source. Anyone, from any background, or with any skillset, can contribute.”

Love that, Arun. So, you already mentioned diversity and the importance of building a community where contributors from different backgrounds feel valued, but what are the main advantages of that?

“When you are building a project, the ultimate goal is for that project to be used by people, and you want it to work correctly for people all over the world. For example, imagine an open source version of Apple’s FaceTime technology, if the only people working on the project are white males between 30 and 50 years of age, then when you launch the project, it will only work correctly with that demographic. This would be a catastrophic failure of the project. You want projects to work across all genders, all skin tones, all facial structures, with and without hair—right? When all people, all over the world, take part in a project, that’s the real value.”

“I can’t even imagine a non–open source world. How would you hire and find these people? It would be a monumental task, and in my mind, these things only work the open source way. The value of having so many different voices and backgrounds is immeasurable and is the main factor in why open source is necessary.”

Check out Part 2 of this interview, where Darren talks to Arun about mentoring the next generation of developers, and what excites him the most about the future of the open source ecosystem. 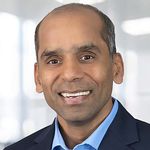 Arun Gupta is vice president and general manager of Open Ecosystem Initiatives at Intel Corporation. He is an open source strategist, advocate, and practitioner for nearly two decades. He has taken companies such as Apple, Amazon, and Sun Microsystems through systemic changes to embrace open source principles, contribute and collaborate effectively. As an elected chair of the Cloud Native Computing Foundation (CNCF) Governing Board, Arun works with CNCF leadership and member companies to grow cloud native ecosystem. He has delivered technical talks in 45+ countries, authored multiple books, and is a Docker Captain, Java Champion, and Java User Group leader. He also founded the Devoxx4Kids chapter in the U.S. and continues to promote technology education among children.
Authors