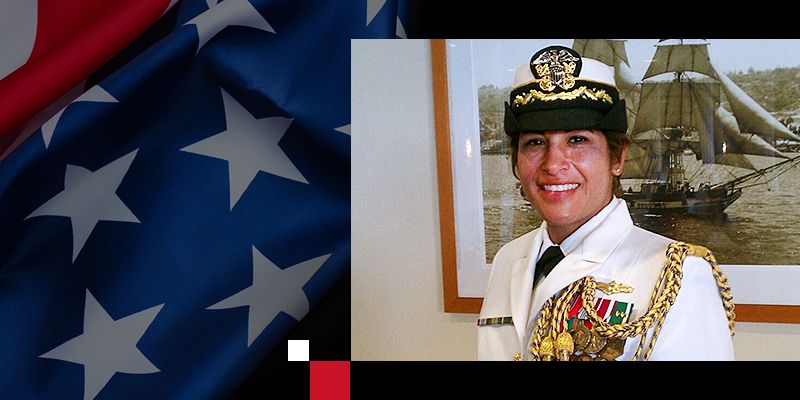 We_Are_Intel1
Employee
0 0 303
For Gisele Bonitz, director of Risk and Controls for Intel’s Datacenter and AI Group and retired Navy captain, Veterans Day is an opportunity to reflect. On November 11, Gisele will recall fond memories from her military service, honor the sacrifices of those who served and support those who are currently serving by helping their families.

Gisele is a member of Intel’s Veteran Leadership Council, and she values service and giving back to her community—both at Intel and in her home of San Diego. Today, Gisele shares her experiences in the service, at Intel, and the transition between.

What is your military service story?
I was born in Panama and raised in Nicaragua. I came to the U.S. for high school and entered the Navy through the Navy ROTC program at the University of California, Berkeley. From a young age, my parents inspired in me a deep commitment to service. The Navy gave me an opportunity to not only cultivate this desire but also work in a team environment and travel. I spent most of my time in the Navy as an information professional, before retiring as a captain. My last two tours were in San Diego at the Space and Naval Warfare Systems Command (SPAWAR) and SPAWAR Systems Center Pacific,[1] where I began as chief of staff and ended as the commanding officer.

As you reflect on Veterans Day, how do you think about your transition from the Navy to civilian life?
Before coming to Intel, I was at SPAWAR Systems Center Pacific working with a lot of civilian engineers, and I wasn’t on a ship. So, in some ways, the transition was fairly natural.

When I came to Intel, my first position was as project manager with the Saffron Group, working on an AI program. This felt like a natural next step for me as I had been a program manager in the Navy and my last command was doing a lot of AI research. It also gave me a great opportunity within Intel. Even though I was new to the organization, others would look to me for my expertise. It was remarkable to be transitioning from service to a civilian position and to still be able to use my expertise from the outset.

Transition from the military is not always that smooth for veterans. Coming out of a career in the military, military members need to learn the basics, like understanding job requisitions that match our military skill sets, networking, interviewing and creating a resume. I had to do all of that while performing my military duties and raising my son. It was a lot to deal with. My co-workers at Intel helped make the adjustment easier. I was able to rely on them to help me navigate some of the things that were unfamiliar to me, like Intel acronyms, certain benefits and stock options.

How does your experience as a veteran inform the work you do today?
The most comfortable choice for me would have been to work in the defense industry, and it’s where many ex-service people go. But since I was already making a big transition, I took the opportunity to embrace the change and try something completely new, like joining Intel, a tech company that put Silicon Valley on the map.

That being said, I bring many of the skills and values that I developed during my time in service to my work at Intel—especially my sense of duty. I’m always asking what I can do to further our company’s mission. In my current position as director of Risk and Controls for Intel’s Datacenter and AI Group, I bring a strong ethical approach to my work based on trust, transparency and integrity.

Outside of Intel, I am passionate about community service. During my tours, I found a lot of joy in participating in local activities where I was stationed. Today, I sit on the boards of philanthropic non-profits, like The San Diego Foundation, and I work with gold star families. On Veterans Day, I would normally volunteer with my son in remembrance of the soldiers, shipmates and teammates that I’ve served with in the past. Now that my son is in college, I will plan a service activity on my own.

What similarities—or differences—do you see between the Navy and Intel?
I stayed in the military because I believed in its mission and its values. It’s the same for Intel. The military, for instance, is mission focused, but it takes care of its people. I’ve seen the same at Intel, especially in its response to the pandemic. I also think both organizations value building our communities and giving their people opportunities to serve. I have never had a supervisor tell me I couldn’t take time off to do community service.

What advice would you have for other veterans at Intel?
If you haven’t already, I would recommend that you reach out and join one of the many employee resource groups that Intel has, including the American Veterans at Intel (AVI). Intel’s AVI Veteran Leadership Council has given me a strong sense of camaraderie, and it has opened an opportunity to learn about Intel’s culture from a perspective that I can relate to and understand.

Also, find a mentor. A mentor can help you learn not only about Intel’s products and customers, but how you can best make your impact at the company.

And for those in the military who are getting ready to transition back to civilian life, the most important thing you can do is to start networking early. Don’t wait—get out into your community and build connections with the people who inspire you.

Ready to transfer your military experience to making an impact through technology? Do something wonderful. Apply today.