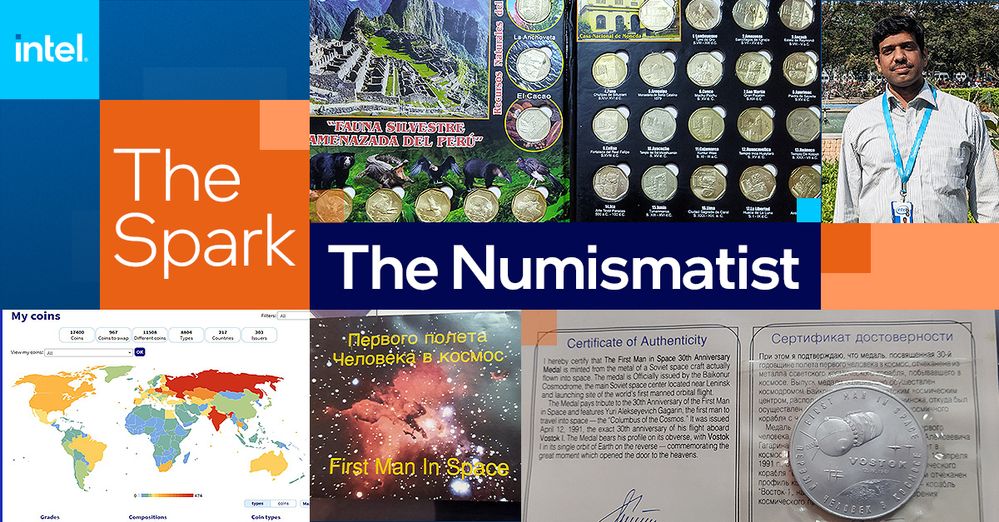 Intel is a microcosm of the world, peopled by dynamic, multi-dimensional individuals who are not only the best at their jobs but also some of the most inspiring personalities to work alongside. Explorers, creatives, performers, and gamers — in this blog series, some of our incredible colleagues share insights into their inner lives, unveiling a never-before-seen portrait of them – and the passion projects that drive them daily.

Easy come, easy go. For most children, pocket money gets spent on candy or toys, almost as soon as it’s received. But, even as a child, Prabhu Rajendran was different. The pocket money he received wasn’t spent but carefully collected. What started as a collection of a few Rupee coins would ignite a lifelong passion that promised more joy, learning, and fulfilment than that young boy of 12 could ever have imagined. In this conversation, Prabhu introduces us to the world of coins, how he feeds his passion for it and how it enriches him in return.

Prabhu, let’s start with the side of you that we are familiar with at Intel. You are a Software Engineering Manager, correct?

That’s right. I’m part of the System Integration and Validation Team in the Client Computing Group. I started out as a developer — an embedded system software contributor — then progressed to project management, and today I lead a team of seven engineers responsible for various connectivity aspects of desktops, laptops, and tablets — from Wi-Fi and Bluetooth to ethernet, cellular modems, and global navigation satellite systems.

And you’ve been with us for 12 years. Tell us about the other big passion that you’ve been nurturing during these 12 years.

Have you heard of numismatics?

Sounds familiar but do elaborate…

Okay, so I collect coins — that’s numismatics. I’m just fascinated with all kinds of coins from all over the world. Commemorative coins, bi-metal coins, oddly shaped coins… you name it! There’s an entire almirah at home full of albums of the coins I’ve collected — 110 kilos of coins from 216 countries. Not countries, we call them “issuers.” Even within India, historically, you’ve got different issuers like all the princely states and dynasties — Hyderabad, Mysore, Baroda, Kutch, Indore, Mughals, etc. So, yes, I’ve got coins from 216 issuers. Aiming for 300. And if you look at my entire collection, I’ve got around 8,800 different types of coins, across a total of 11,500 individual coins!

That’s amazing! It must have taken years and years to put together this collection. Let’s rewind all the way back to the first coin you collected. What was it and what was it about this coin that sparked your interest?

I must have been 12 years old. My father used to give me 50 paise every day. You know, like pocket money. Sometimes there would be a 10-paisa coin. I noticed that all these coins had different images on them. So… instead of putting them in a piggy bank, I collected them, pasted them in a notebook and compared all the different images. I started wondering: “Who is this person? Why is his or her face being printed on coins?”, etc. So, that’s how it started.

Unfortunately, that collection was stolen around the time I went to college, and I was quite upset about it. I stopped collecting for a while. Then, I think, it was during a trip to the U.S. that I saw all the different coins there. Did you know that the U.S. mint has released coins with unique designs for each of the 50 states? So, that inspired me to start collecting again.

You know, now that you mention it, most people never really take a good look at the coins in their pockets. In fact, these days we tend to use digital wallets more than actual wallets. But you’re so right. Coins are not just legal tender right? They tell stories, in a way.
Stories… that’s why I mainly collect commemorative coins — the coins that are issued to mark some special event. You know how, in many countries, it’s common to put the faces of their national leaders on coins, right? But in Poland for example, they prefer to represent key events — like important wars, or festivals, or sports competitions they have won or even scientific discoveries. Sometimes they feature certain species of animals and important heritage buildings, etc.

For me, this is interesting because it tells me so much about what each country values it or what they see as the symbol of their identity. In the U.S., if you notice, they want to represent their various national parks or their mountains on their commemorative coins. So, they’re highlighting all the natural wealth that they have. That’s the story they want to tell.

What’s the most special, rare or unique coin in your collection?

There are many, like the old bi-metallic coins from Andorra, and the rectangular World Food Day coin from Tonga and the triangular coins from Bermuda. But the most special one, without a doubt, is my Russian coin medal minted by the Baikonur Cosmodrome, a former Soviet and current Russian space centre in Kazakhstan! Do you know who was the first person to fly into space？

Yes… so a bit of history here. On 12th April 1961, Yuri Gagarin was the first human to enter space and orbit Earth once. His spacecraft launched from Baikonur Cosmodrome. This coin I’m talking about, it was made using metal from his space capsule, Vostok-I. It’s a large coin, but extremely lightweight. It’s very rare.

How I actually got my hands on that coin is a story in itself. I found it on eBay but the seller — U.S.-based — was not willing to post it to India. So, I got it shipped first to my friend in the U.S., and he brought it to India later, after some months in fact. I had to wait so long before I could actually feel it in my palm.

How extraordinary. It must also have been quite complicated to coordinate all of this. Not to mention expensive, too.

Yes, in fact, this process has taught me to be very patient. And it also involves a lot of record-keeping, which we do using an online tool called numista.com. This website is like a community too, so I can find other collectors and swap my coins with them. So, in this way, I’ve made friends from all over the world. In fact, 90% of my collection was built through international swaps or exchanges. Sometimes even my colleagues at Intel help me with these exchanges when they travel abroad. Some of them also ask me about it and we have such interesting discussions.

Entering this world of numismatics can be like trying to find a needle in a haystack. I can spend hours and hours at night looking for coins. Yes, it can get quite expensive sometimes. But it’s all worth it when you sit down at the end of the day and organize your collection. Numismatists certainly learn a thing or two about patience! And the best part is, my family supports this passion of mine.

So, the motto is “Be patient, meet people, keep exploring.”
Definitely. And that helps with everything else that you do in life. It can be work, or your career growth. Patience and continuous learning — the journey never ends.