The Spark: The Gamer 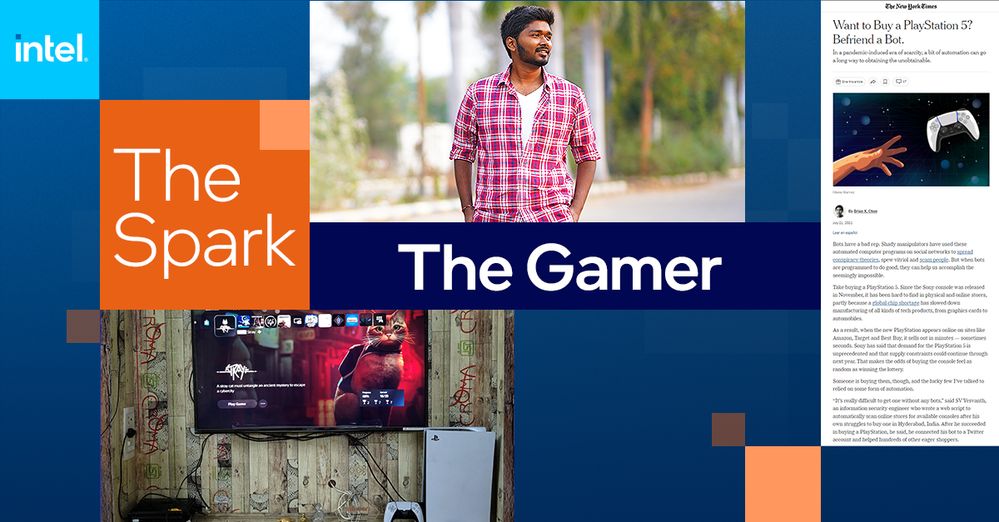 Intel is a microcosm of the world, peopled by dynamic, multi-dimensional individuals who are not only the best at their jobs but also some of the most inspiring personalities to work alongside. Explorers, creatives, performers and gamers — in this blog series, some of our incredible colleagues share insights into their inner lives, unveiling a never-before-seen portrait of them — and the passion projects that drive them daily.

The Spark: The Gamer

The journey from cart to checkout isn’t always a smooth one. But no one could have guessed, least of all Yesvanth Kumar, that his determination to snag an elusive gaming console would be the start of something truly epic. The Spark sits down with Yesvanth for an account of this unexpected adventure: from a programmer’s smart shopping cheat to an exclusive New York Times feature, and beyond.

Glad to be here! It’s been great. There’s been tremendous learning. It all started with an eight-month internship in 2019, after which I was one of two lucky interns chosen to join Intel as full-time employees, back in March 2020.

Just as the entire organization was pivoting to remote work.

Exactly. The transition was quite smooth, actually. But, in more ways than one, that lockdown become a turning point in my life.

So, is this where your story truly begins?

That’s right. Like a lot of other people at the time, I turned to gaming for a bit of fun. Through school and college, I’d played a bunch of games like “The Last of Us Part I” and a 2D side-scroller game called “LIMBO,” but never very seriously. So, around the time of that first lockdown, the new PlayStation 5 (PS5) was about to be released and that caught my interest.

Right… this was around November 2020?

Correct — and even though it was selling out in other parts of the world, the PS5 release wasn’t even announced in India. After about a month of waiting, I decided it was time to create a Change.org petition calling for the new console to be released in India. And guess what? More than 13,000 Indian gamers signed my petition.

I’m not really sure if that was what did the trick but, eventually, we got our wish. That happiness was short-lived, though, because within seconds of going live the entire stock was sold out. They’d imported only 4,000 units for all of India! Gamers all over the country were trying frantically to get their hands on it, me being one of those who had tried and failed. Then it struck me.

I had the idea to write a Python script that would scan through e-tailer websites to automatically place an order the moment the next restock went live. So, I wrote it and ran it. It worked like a charm.

Thank you! That’s how I snagged myself that much-coveted console. When I tweeted in celebration, I had no idea I’d soon be flooded with messages asking how I’d done it.

So, when you took your coding skills and put them to use here, you basically sparked off a chain reaction among the broader gaming community.

Yes… There was a barrage of likes, retweets, comments, calls for help. So, I decided to do just that — help. With a few tweaks, my script was reprogrammed to automatically post an update the moment new stock become available, be it the PS5 or even the Xbox Series X or S. The response was overwhelming! Within the month, close to 5,000 gaming enthusiasts were following my account, and it was a joy knowing I’d successfully helped many of them purchase their brand-new gaming consoles.

Community is integral to gaming culture, isn’t it?

Definitely, especially in times like these. People unite and bond in numbers. We’ve seen how digital communities can work, and gaming communities are a classic example. I decided to create a Discord server with multiple channels. It offers gamers a platform to meet and connect. Today, my Twitter community consists of 15,900 followers, while around 6,200 members frequent my Discord server.

What has been the biggest highlight for you on this journey?

Well… there have actually been two big moments. Firstly, the fact that my endeavor had gotten the attention of a journalist from the New York Times. In July of 2021, he interviewed me for a piece about how automation has helped gamers overcome the struggles of obtaining their systems and consoles during the pandemic. The article was published a few days later. It was thrilling to see my name in the New York Times!

Very cool. And the second?

It was a presentation I gave at one of our internal conferences about a year ago, something I wouldn’t ever have thought of doing had it not been for my manager’s encouragement. He pushed me to showcase my passion and motivated me to give a presentation on my entire process — from developing these scripts to growing a leadership mindset. I also talked about the technical aspects that are quite critical to any online undertaking like this.

I have to say this – my manager and teammates have been amazingly supportive throughout it all. This is my first job fresh out of college, and I cannot imagine a better team than the one I have now at Intel.

You sure have found your community at work even as you are building communities in the world of gaming.

Yes, people helping people makes the world go around! And I’m so grateful for the incredible souls I’ve met on this journey. There’s one very special friend in particular, Abdul, who first connected with me when he reached out with a moving story. He had been in a terrible accident that had left him bedridden. He said to me, “Hey I’m a gamer and I have a lot of time on my hands. This is a big task that you’re doing. Can I help?” Abdul lives in Chennai and he’s an amazing soul. He manages my Discord account almost single-handedly, and this is one of the reasons that I’m able to strike a work-life balance.

Sometimes, I can hardly believe it. All I know is that I’m truly privileged to have been able to find such fulfilment both at work and outside of it.