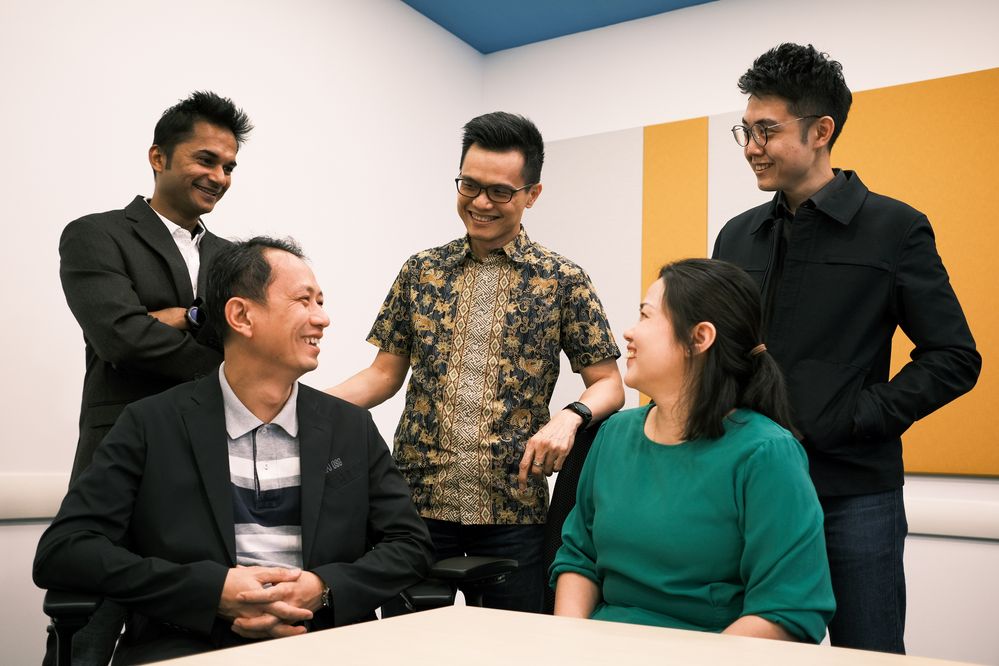 We_Are_Intel1
Employee
0 0 270
Meet the Inside Sales team. This close-knit group serves customers from Japan, Korea, Taiwan, Australia, New Zealand, India and most of southeast Asia. Walk into their oﬃce and you just might mistake it for a mini United Nations, judging by the hanging ﬂags that represent the countries they work with.

As part of Intel’s Sales & Marketing group, they share similar overarching goals with Outside Sales – but there are nuanced diﬀerences in how they go about achieving them. Instead of the more conventional salesperson role that requires physical travel to meet customers, the Inside Sales team leverages heavily on technology: be it making phone or video calls, chatting via social networking applications, or using AI analytics to help with decision making.

The oﬃce is purpose-built for collaboration: with a design and layout characterized by lower cubes, larger table groupings, noise masking technologies, a green room, and a virtual lab. Contrary to the occasional misconception that Inside Sales functions as a call center, it is in fact a team of account managers who work closely with technical experts to design and deliver solutions for customers both near and far.

Here, we sit with the team’s leaders as they reﬂect upon their journey and managerial perspectives in Intel.

Simon’s career at Intel began 16 years ago, in Kuala Lumpur as an account manager. He went on to work in distribution, then sales management, and then took the leap into a regional role in Singapore. Four years ago, he ventured north into Penang to lead the Inside Sales team.

He measures success by how much his team looks forward to going into the oﬃce when they wake up. “I exist to both lead and serve the team – I do believe that the employee is a company’s most important asset. And if they look forward to coming in, that to me is half my job done.”

Apart from trying to create an environment where everyone can be successful and be the best version of themselves, Simon adds that getting the team to function as one is also key, especially given its diversity. In order to achieve this, they have quarterly team-buildings, organize get together such as badminton on Tuesdays, and celebrate during the festive seasons, among other things.

He draws parallels between leading a team at work and a family at home – there are going to be diﬀerences in opinions and gaps in understanding. And to him, this is where Intel’s cultural attributes come in handy – both in the oﬃce and at home. He acknowledges that culture is not a switch that can be turned on and he makes it a point to help the team understand and embody these virtues.

On what keeps him going, he says, “I’ve come to realize that there’s only so much I can do as one person. And if I can get my team to be at a level where they can also inspire others, then the impact will be multiplied.”

“The work is never ﬁnished, the learning never stops.”

“While my aspirations have changed over the years, one thing hasn’t – and that is to make a diﬀerence in the lives of the people around me.”

Kelvin started out as an intern at Intel in 2002, learning about motherboard schematics and layout design. Two years later, he oﬃcially joined the company as a Technical Marketing Engineer whose main role was to provide back-end technical support for customers. Following that, he took on the role of a Platform Architect, which required an understanding of what customers need. Today, as the Inside Sales Manager for Japan and Taiwan, he spends most of his time driving the business, managing relationships, building trust, and energizing a team of 12.

With a degree in electrical and electronic engineering, Kelvin’s trajectory from working behind the scenes to being on the front-line was driven by his desire to connect with others and make a diﬀerence: the quest for greater correlation between his role and its impact on those he works with. “It’s largely down to character and knowing yourself. I ﬁnd greater fulfillment in understanding what my customers and the industry need and knowing the value I can bring to move that needle.”

“The environment undoubtedly helps. We’re in the midst of a cultural evolution, where we’re not just talking about results but also how we go about it. And that includes working as a team and being razor focused on customer needs. It’s also great that the company promotes learning in tandem with working.”

“You can do what you want to do, provided you really want to do it. But the first step has to come from you – you own your career - that’s the key. Your manager and people around you at Intel are always ready to help.”

Change has been a constant in Arun’s journey. He recalls moving from the quieter southernmost state of India to Mumbai as a boy. Jumping industries with zero knowledge during the telco boom. He joined Intel in 2008, grew his portfolio, and in 2015 took another great leap, uprooting with his young family in a move to Penang.

Arun joined the Inside Sales team when it was still known as the Online Sales Centre. Today, his scope as Team Manager includes a host of countries in the APJ region. “I’m blessed. In the last four years, I’ve been assigned a new team and market to manage every year and a half. My journey continues and I’m always learning something new.”

Arun has been at Intel for 12 years, but it certainly doesn’t feel like it. With advances in IOTG and AI, he’s in the midst of expanding his knowledge and skillset – always at the ready for the next big opportunity.

“I can always be comfortable - but comfort has a limit, whether it’s in your health or your career. There is a breakeven point for everything. I personally feel that you should take risks. Even if you do fall, you’ll fall back into your comfort zone.”