Opening up the Device Modeling Language 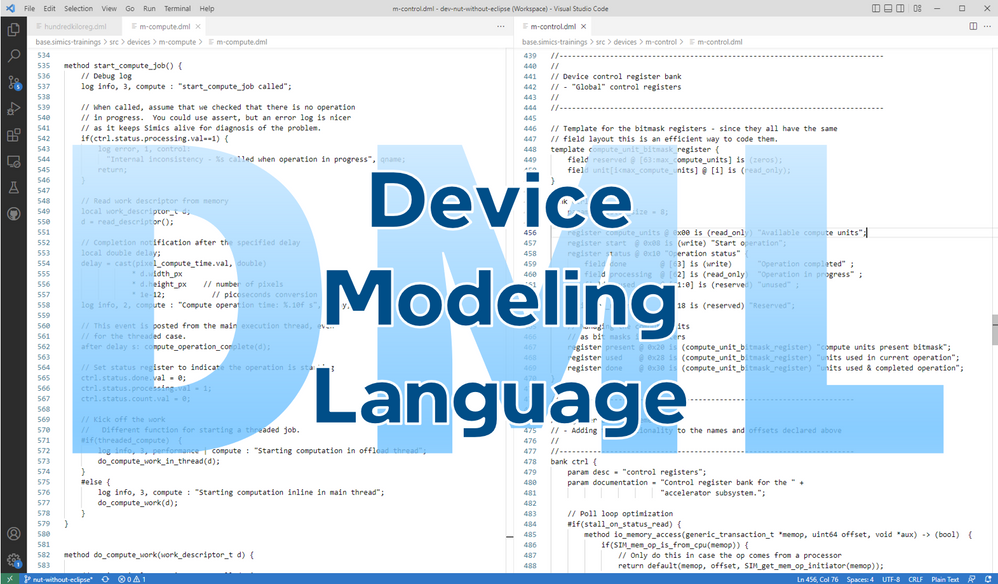 The Device Modeling Language (DML) is a domain-specific language for creating fast functional transaction-level virtual platform models. The first version of DML was launched in 2005, and it has been the standard way to build device models for the Simics® simulator ever since.

The Simics use of DML as the primary modeling tool is an interesting example for the virtual platform community. The most common approach for virtual platform modeling is to use a general-purpose language (like C++ or C#) along with a modeling library and simulator API.  Designing a domain-specific language is philosophically different, and in our experience DML has provided benefits for programmer productivity and model quality that provide a clear return-on-investment.

Some particular observations about the benefits of DML:

Previously, the user base and audience for DML has been fairly limited, as it has only been available as part of the Simics simulator. That has changed. The Simics simulator is available as a public release, and the DML language and compiler have been made available as open-source on github. Taken together, these releases make very easy for anyone interested to try DML and do some device modeling with it, in a virtual platform context. 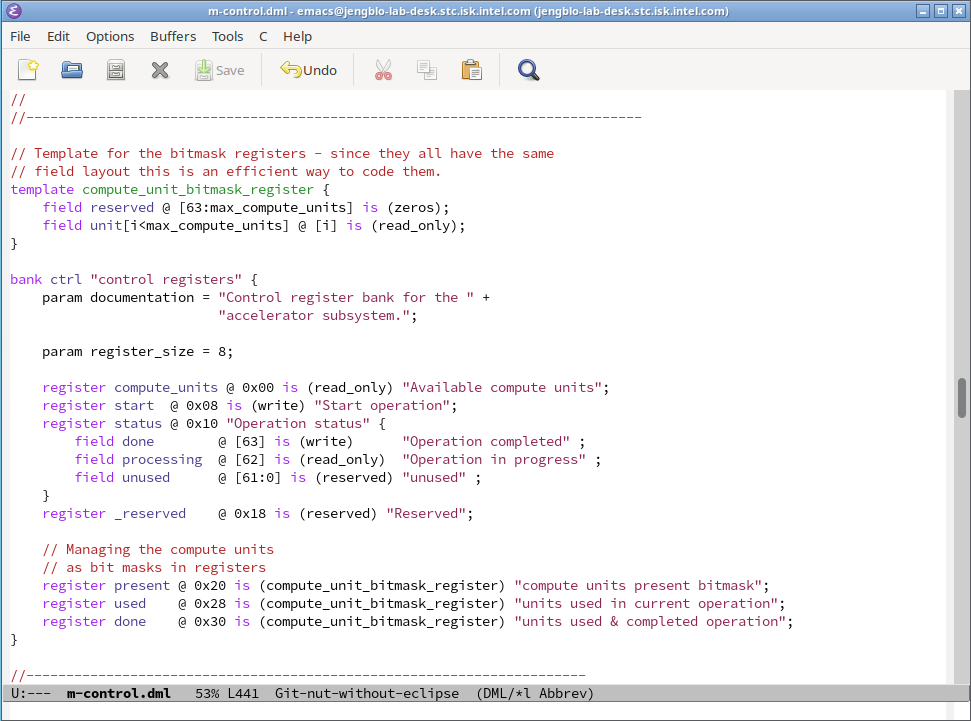 Some example DML source code being edited in Emacs*

The Background of DML

Before DML existed, device modeling for the Simics simulator was done using C or C++ and the Simics API. This resulted in large amounts of boilerplate code for mandatory tasks such as registering classes with the simulator core. Whenever such unnecessary repetition is seen, the natural reaction of a programmer is to design a little language to distill the interesting parts of the problem. DML grew from an initial C-code generator into a language.

This resulted in DML 1.0, which was released in 2005. The second version, DML 1.2, was released in 2007. It worked very well, but over time the need for a major overhaul became clear. The current version, DML 1.4, had its first release in 2019. It marked a distinct change compared for DML 1.2, overhauling much of the syntax and refining and defining the language semantics. Since then, there has been a steady stream of additions to the language, with more in the pipe.

The Device Modeling Language is a language used to model devices, i.e., individual hardware blocks. For example, a timer, serial port, interrupt controller, accelerator block, or Ethernet interface. DML assumes an event-driven transaction-level simulator where the device model is driven by a series of function calls from the outside, and in turn operate by calling other device models. Device models are typically leaves in the system hierarchy (alongside instruction-set simulators, memory maps, interconnects, and memories), and are created by a separate simulator configuration system.

The main interfaces of a device model are illustrated below. DML provides dedicated language constructs for each of those interfaces.

Every DML device starts with a device declaration, followed by parameters (param keywords) that provide model metadata and control aspects of the device setup. The behaviors of device-level templates are also controlled and specialized using param. Standard libraries, interface declarations, and framework code used in a model are pulled in using import statements.

The example code used here can be found in the m-control device that is part of workshop-02 in the training package in the public release of the Intel Simics simulator.

Register banks are declared using the bank keyword. Inside each bank, there are registers and fields. For readability, it is recommended to declare the layout of a register bank separate from the implementation. The DML compiler combines all declarations related to the same register into a single implementation, allowing arbitrary code structuring.

Register layouts generated from specification files (such as IP-XACT*) are typically saved to their own source file, which is then imported into the device model. Templates (such as read_only or reserved in the code above) are used to specify common behaviors. When more complex and specific behaviors are needed, they are added in a second bank declaration that provides implementations for methods like read() and write() on registers and fields.

Note the use of log spec_viol to report bad actions from the software. A virtual platform can check and report on what the software does, and DML makes it very easy to add usage warnings like these.

Another core function of a device is to communicate with other devices. In DML, this is accomplished using unidirectional connections from one device to another. A device receives incoming transactions as function calls in named ports.

For example, this port is called control_in and implements the m_compute_control interface:

Interfaces are defined outside of the device model, since they are by nature shared between multiple devices. On the sending side of the interface, there is a connect. For example, the following declaration creates an array of connections from a device to a set of devices implementing the m_compute_control interface:

When used in the Simics simulator, the connect automatically creates a configuration attribute that is used by the simulator setup system to point at the receiving object’s port.

The above code examples are just a few snippets to demonstrate what DML looks like. To learn more, the best way is to download and install the public release of the Intel Simics simulator. As documented in the get started guide, there is a workshop called w02 that uses DML to model a PCIe-based accelerator. There are also many device models written in DML in the Simics base package and Simics Quick-Start Platform (QSP).  The DML language is documented in the Simics simulator documentation, as well as on the github page.