Hi everyone. I have an issue with my Dell. I'll go in chronological order.

On the 20th of March a Windows update was completed.

I have an additional TV monitor setup off of my Latitude on a DisplayPort-out. After the Win update, the generic monitor display on the Latitude would no longer work. However, on startup, the Dell logo would appear and then after that, the blue Windows icon, but after the Windows icon would stop as bootup continued, the laptop display would shut down and the external TV would kick in. This renders the laptop useless for work away from my TV. I'm tied to it because my laptop monitor is off. Detect display did not work, nor did extend or clone displays.

In my Intel Graphics Control Panel, only the TV display was recognized whereas the generic Latitude monitor was also detected previously, but no longer.

I reinstalled the graphics driver through the device manager and rebooted.

I got my laptop monitor back and working, but now my TV monitor was down. The roles had reversed.

I went to open the Intel Graphics Control Panel, but it was gone. When right clicking on the desktop, it had vanished from the list. Going to display settings, again, detect displays did not work.

So, I could use a little help.

So there's no confusion, here is an image I got off Google of the Intel Graphics Control Panel. 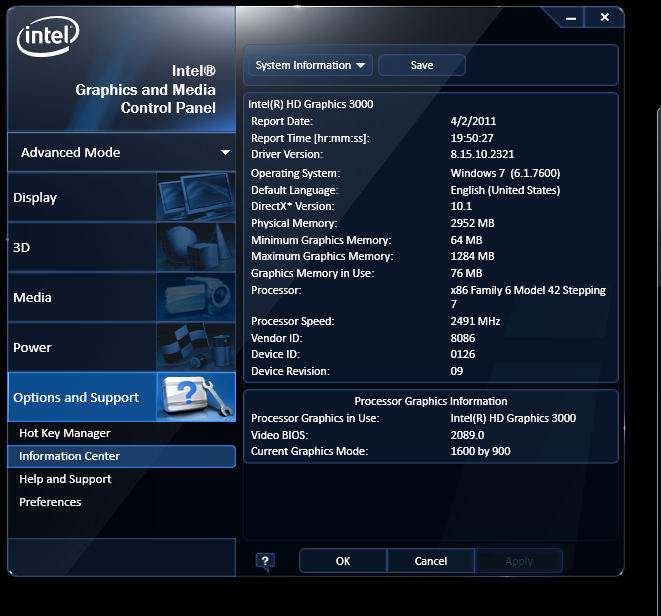 The Intel Graphics Control Panel was EOLed a couple of years ago. With the DCH driver model, Microsoft removed support for the invocation of Control Panel-based configuration utilities from the context menus. Intel released a replacement app to use with their DCH-based drivers named Intel Graphics Command Center. It should have been automatically installed into your Start Menu. If it is not present, you can install it from the Microsoft App. Store.

I discovered that through my research last night, but I was unable to find it in the Microsoft store. I'll try again though. Thank you.

Edit: And I just found it. Thanks. I'll see what I can do.

I got the Intel Graphics Command Center installed but in display mode, it just keeps cycling. Can't set up the displays. So close.

This issue has been resolved by finding the right driver.

Thank you for your help, Scott. I do appreciate it.

We understand that you have solved the problem, glad to know that. Also, based on the information we found on Dell's website* for this laptop model (Dell* Latitude E6410) and based on the processor options it may have (Intel® Core™ i7-620M/Core™ i5-540M/Core™ i5-520M Processors) the laptops comes with "Intel® HD Graphics for Previous Generation Intel® Processors".

In case you have further inquiries, it is worth mentioning that due to the Intel® HD Graphics for Previous Generation Intel® Processors has been discontinued, Intel Customer Service no longer supports inquiries for it, but perhaps fellow community members have the knowledge to jump in and help. You may also find the Discontinued Products website helpful to address your request.

You can verify this product's discontinuance status at the following links:

Finally, and just for clarification purposes, the system requirements to be able to use the Intel Graphics Command Center are: