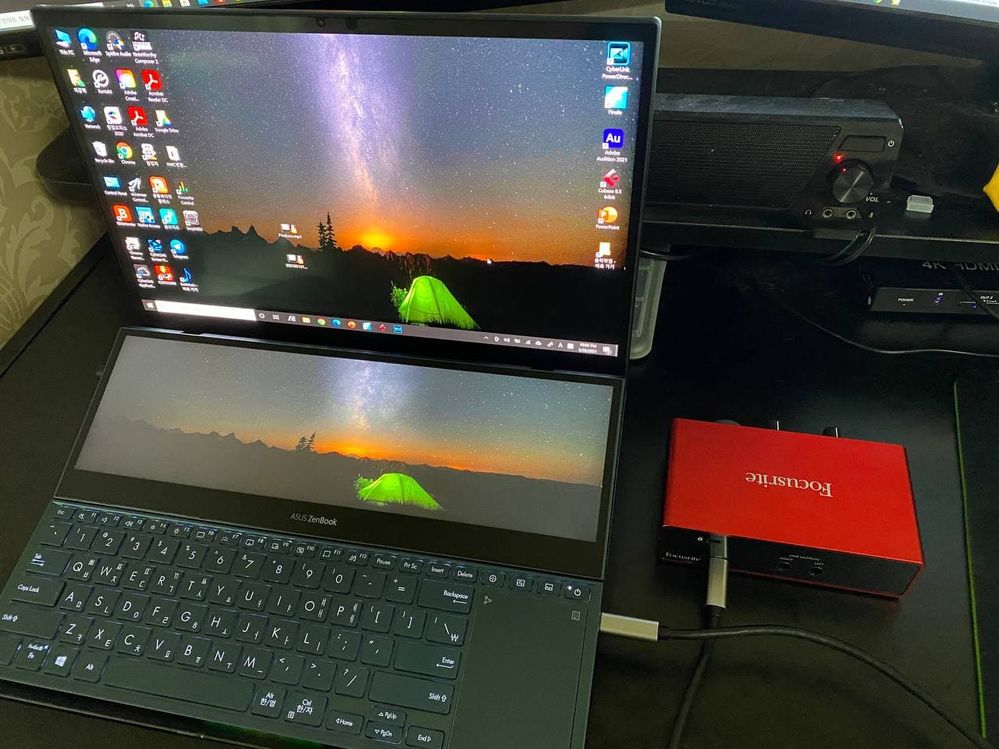 To work on music, I purchased the USB audio interface, the Scarlett solo 3rdgen. from Focusrite, and connected it directly to the laptop.

As shown in the image above, the two devices collided, and my laptop became hot as if it were going to catch fire, and the fan turned like a storm.

In this situation, Windows did not sound properly, but it is surprising that the sound through the ASIO driver on the audio interface worked normally.

However, the audio interface had to be removed before the computer overheated.

The only way I could use the audio interface was by changing the device manager to disable intel smart sound technology audio controller.

I already reported this problem to support team of focusrite, and I tried to solve the problem in the way they recommended, but all of them failed.

When I connected my audio interface to another computer, it worked fine, and since the above problem did not occur, it became clear that the problem was due to a driver conflict between the Intel SST Audio controller and the audio interface.

Has anyone had the same problem as me because someone connected the external audio interface to a computer with an intel SST audio controller? And if anyone has solved this problem, please let me know the solution.

I got Scarlett 2i2 2nd gen and have had some issues on my desktop comp, that my computer wouldn't start, cuz of power distribution in BIOS. I couldn't have connected anything, not even a simple webcam - cuz of the USB. Then just distributed power in BIOS and no issues at all. And installed as well ASIO4All - which I don't use actually, but I use 2i2 only for Pro Tools, not as default audio device, there were some issues when you shared the Scarlett as a default audio device for any sound.

Depends I imagine - as well of what DAW you're using, I guess

· Download the Intel® SSU and save the application on your computer:  https://downloadcenter.intel.com/download/25293/Intel-System-Support-Utility-for-Windows-

3. Have you updated the operating system, drivers, and BIOS?

4. Have you contacted the laptop manufacturer for further steps?

5. Can you provide the model name of the other laptop and its processor?

6. Did you receive any outcome from Focusrite?

7. Have you reinstall the Intel Graphics Driver and Intel Smart Sound Technology (Intel SST) driver? For this you may need to contact the laptop manufacturer since Intel ISST is only provided by the computer manufacturer

I updated all Windows drivers and BIOS.

Also, I informed my laptop maker, ASUS of my problem, but they replied that Intel should solve this problem.

It worked fine when I connected Focusrite's audio interface to the desktop, not the laptop, and when I connected it to my laptop, UX582, it collided violently with the Intel SST audio controller.

I tried uninstalling and reinstalling Intel SST, but the problem has still not been solved.

I hope this problem will be solved as soon as possible.

I would like to confirm with you some details:

1. Which type of connection uses the Focusrite device?

2. Was it working fine before?

3. Are you using the OEM (Original Equipment Manufacturer) driver https://www.asus.com/Laptops/For-Creators/ZenBook/ZenBook-Pro-Duo-15-OLED-UX582/HelpDesk_Download/?m...?

4. When the Intel SST crashes, is there an error message or code on the device manager (code 10 or 31)?

1. Connect directly with my laptop through USB 3.0 or Thunderbolt 3. It does not use a hub between.

3. I use the OEM driver you linked normally.

4. Device Manager did not receive any error messages, and the audio controller repeatedly connected and disconnected.

I hope Intel will contact focusrite and resolve this issue through consultation.

With these details, I will continue with the research and I will post back as soon as I have any update for you.

Based on the research, look like this issue may be related to a miscommunication with your laptop and the Focusrite device. If you already checked:

1. that latest BIOS is installed.

2. That latest drivers are installed

3. That Windows is fully up to date.

4. That latest firmware for the USB 3.0/Thunderbolt 3 is installed.

I do recommend you to check with the laptop manufacturer since this could be a compatibility issue, and they are the ones that can provide you with a version of the Intel® Smart Sound Technology (Intel® SST) fully compatible with your device.

As for the overheating issue, check that also with the laptop manufacturer for steps to cold down temperatures on their system.