I'm facing two issues: Sometimes it takes more than one minute for the NUC to go into sleep mode. The SSD drive is very busy during the transition. I would understand it if it was hibernating, but this is just a transition to stanby sleep which normally takes few seconds (on my other computers and laptops).

And after it finally sleeps (power LED breathing), the HDMI monitor is activated every 10-15 seconds. Monitor gets active, it founds no HDMI signal and goes to standby again - and this repeats forever.

Other than that, there is no issue with waking up etc. Waking up on keyboard or mouse click is very fast and Windows run normally then.

Any idea how to fix it?

So the Intel support engineers can have more information about your system, Download, run, and save the results of this utility as a text file:
https://downloadcenter.intel.com/download/25293/Intel-System-Support-Utility

Then ATTACH the text file using the instructions under the reply window ( Drag and drop here or browse files to attach ).

Hello, here it is.

We will be investigating this behavior with the information you have provided so far. In the meantime, can you add the following details?

Please kindly wait for an update on this.

A thought: Since the system is using Modern Standby, asking it to sleep is offering Windows an opportunity to run some of its background maintenance tasks and this may contribute to the time it takes before the system looks like it is sleeping.

thanks for your inputs. By using Windows Performance Recorder, I have found out that high pre-sleep SSD activity is caused by Microsoft.Photos.exe. Un-registerring all Photos Folders seems to help. The system now gets to standby in approx. 10 seconds and SSD is almost quiet. This is fine.

The periodic HDMI activation during standby sleep still occurs and it is quite annoying to turn off the monitor manually any time I go away for longer time.

I'm not able to test any other SSD or Windows image now, but I would do it if this is the only idea of what to try.

Please try the following steps and let us know about the outcome:

1. Try a clean install of the graphics drivers in order to install the latest driver validated for this NUC 27.20.100.8681

1. Download the latest DCH driver and save it on the computer. https://downloadcenter.intel.com/download/29230/Intel-Graphics-DCH-Driver-for-Intel-NUC

2. Disconnect from the Internet so no new drivers are automatically installed by Windows Update.

3. Uninstall the driver and the Intel Graphics Command Center from Control Panel > Programs and Features.

5. Confirm in Device Manager > Video Adapters the controller is listed as 'Microsoft Basic Display Adapter' > if not, repeat steps 2 through 4.

6. If the adapter continues to be listed as ‘Intel HD Graphics’ or similar, and no other Intel Graphics driver is listed under 'Programs and Features' for removal, then it means Windows has switched to a previously installed Legacy driver. At this point we can remove Legacy drivers from Device Manager:

7. Install the DCH driver that was downloaded in step 1.

9. Reconnect to the Internet.

2. Try to update the HDMI Firmware of the NUC:

3. If that does not work, can you please share the brand and model number of the monitor? Also, are you using any type of adapter or converter between the NUC and the monitor or is it a straight connection? You may want to try a different monitor just for testing purposes.

I have tried all steps that you proposed.

I have observed slight change in behavior, but the problem persists. The period of the monitor "wakeup-nosignal-stanby" cycles while the computer is sleeping is now a bit longer than before - approx. 40-60 seconds.

And even worse, the transition to PC standby mode now takes more than 40 seconds again, sometimes even longer. I was not able to identify any application which would be blocking the transition. The Windows Performance Recorder now shows just "System" and some internal system threads activity after the sleep button is pressed, before the system gets to the sleep breathing mode.

Just for completeness, I use Benq model VW2235H. The issue was observed both when monitor is connected directly and also when connected over HDMI/KVM 4-port switch. Normally, I have other 3 computers (Dell) connected using the switch and none of them show any similar issue while sleeping.

Solution/workaround: Finally, despite of the warning in BIOS that I should not change it without re-installing Windows - I have switched the "Modern Standby" to "Legacy S3" in BIOS. With this settings, the computer standby works perfectly. Sleep transition takes just 2-3 seconds and the monitor remains suspended. Waking up is also very fast.

I'm satisfied with this change, so we can close this case even if the solution for the "Modern Standby" has not been identified.

Thank you for your effort,
Michal

I'm sorry I was too quick when I said I was satisfied. Yes, the computer standby/sleep issue is now solved (or worked-around) by setting the BIOS to "Legacy S3" mode. But the "HDMI never sleeps" issue is still annoying. When Windows is set to turn off the monitor (and the PC is not going to sleep mode) the monitor starts to "flash" again with a period of 30-60 seconds...

I will try to get some other monitor to try, but as I wrote earlier, I do not see this issue with any of my other three computers connected to the same monitor over HDMI/KVM switch.

So, if you have any other idea, I will appreciate any help.

There are multiple devices/apps/drivers that could be waking up the system. See below some recommendations:

1. Check the display first, is it possible that you test with a different display (other brand or model)? It is well known that some displays can generate this issue (for instance HP* 2311x)

2. Open the Start menu and search for “cmd,” then right-click the Command Prompt to Run As Administrator. Type the following command and press Enter: powercfg -lastwake This command may tell you what device woke up your system: 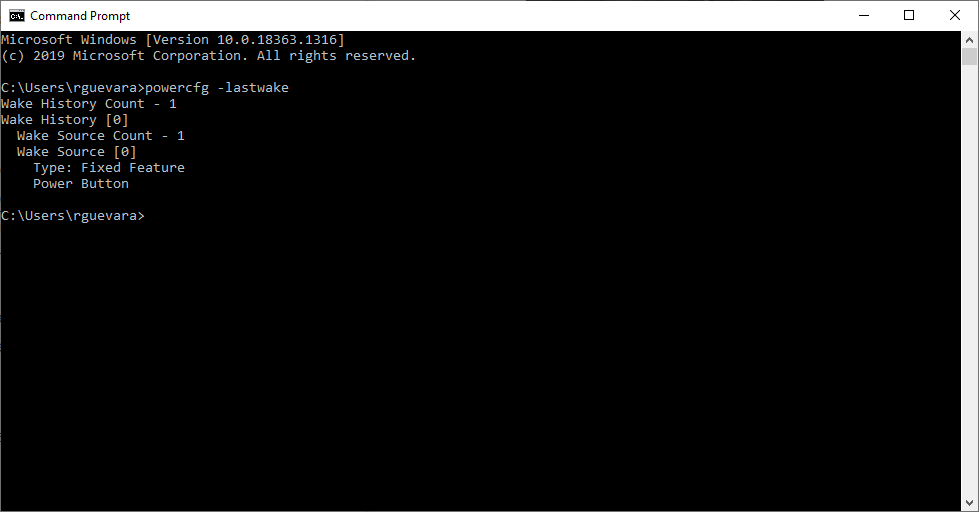 3. Check for devices that may be waking up your system: Go to Device Manager and check for Device Properties, under the Power Management tab and disable the wake-up functionality: 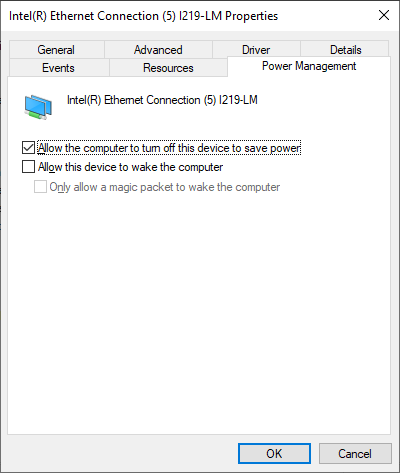 These are some general suggestions, the issue may be slightly different as the system flashes for 30-60 seconds but I hardly believe this to be caused by the NUC itself. As mentioned at the beginning, there could be several reasons for this to happen, even the Windows update scheduler may be generating some of it.

Please let us know your comments and results.

thanks for your response, but my issue is NOT about unexpected wake-up from sleep. The computer goes to standby sleep okay and it does not wake up unless I want to.

My original issue was that the HDMI output was activated periodically while NUC was in the "modern standby" sleeping state. This was causing my monitor to go active, then finding no input signal and going to standby state again. The computer itself was in the sleeping state the whole time. When "modern sleep" was set to "Legacy L3" sleep in BIOS, the HDMI remains turned off while the NUC is sleeping. This part of the issue is solved.

Later I found out that the same issue appears also while NUC is running and just the screen is turned off (e.g. after couple of minutes of inactivity, if this is configured in Windows Power settings). The behavior is the same: the NUC periodically activates the HDMI output once per minute which causes the monitor to exit standby mode, monitor gets active, finds no input signal and goes to standby state again.

Steps to repeat my issue:

When moving mouse or pressing keyboard, monitor wakes up and computer runs normally.

This issue is not observed with the same monitor, but different Windows PCs.

Thanks for the clarification, I will try to replicate the issue following the steps provided and I will let you know my results.

One comment that I need some clarification is when you say: "This issue is not observed with the same monitor, but different Windows PCs".

I ran an equivalent set up during the weekend, I tried with an old AOC* monitor/tv and also tested a more recent Asus* monitor model and I was not able to replicate the same behavior that you are reporting.

Did you have a chance to test a different Brand/Model Display?

We are checking this thread and we would like to know if you were able to review our previous posts. If you need further assistance, please do not hesitate to contact us back.

thank you for your support. I was not yet able to try a different monitor. I should be able to do it in during the next week. I will post an update as soon as I test it.

Thank you very much for your response.

Sure, we understand. Please feel free to post back once you are able to test with a different display and provide details of the outcome.

We are following up on this thread and we would like to know if you were able to try with a different display? If you need more time for this test, please kindly let us know.

I was NOT able to replicate the issue with Dell and Samsung monitors. Once the monitors go to standby mode, they remain suspended and do not resume until mouse/keyboard is touched. ALL three Benq pieces I tried (all the same model VW2235H) ARE affected by the issue - they resume periodically without any keyboard/mouse touch.

I also tried the following other computers with the "problematic" Benq monitors: Dell Precision 7520, Dell Inspiron 5579 and Dell Latitude 7480 - the issue does NOT appear with any on these PCs.

Thank you very much for this feedback and for all your efforts with these tests. Please allow us to look into this and we will be posting more details as soon as possible.

After checking this, indeed looks like a compatibility issue since this is not happening on other monitors. Our recommendation is to keep using one of the monitors confirmed to work fine without the said behavior.

We didn't hear back from you, so we will close this thread. If you need any additional information, please submit a new question as this thread will no longer be monitored.